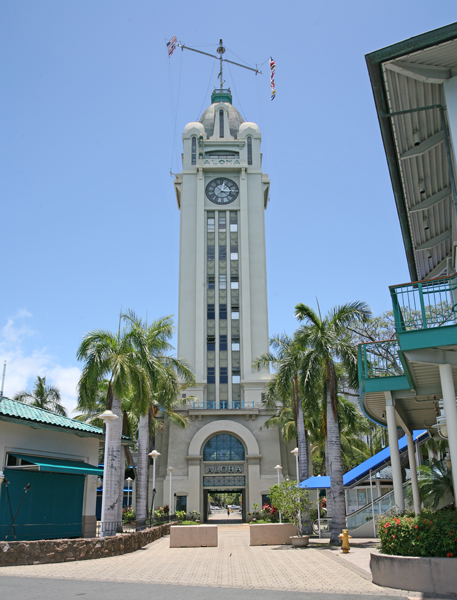 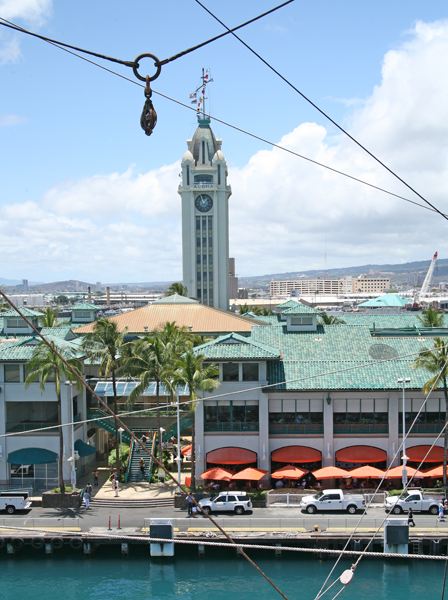 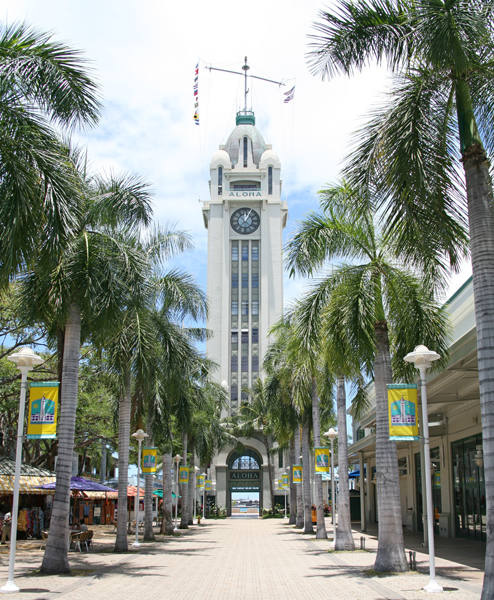 On June 20, 1851, the House of Nobles and the House of Representatives of the Kingdom of Hawai'i passed an act, later signed by King Kamehameha III, for the establishment of lights for Honolulu Harbor. The provisions of the act, however, were never implemented, and in 1862-1863 the private sector led a campaign to raise funds for its own lighthouse at Honolulu Harbor to honor Captain James Cook. These efforts failed to produce a lighthouse as well, and it wasnt until 1869 that real progress was made when the Hawaiian government purchased a small island near the harbor entrance to serve as the site for a lighthouse. Two bids were submitted for the harbor lighthouse. Honolulu Iron Works agreed to provide a lighthouse on iron pilings for $2,141, but a lower bid of $360, submitted by L.L. Gilbert for an all-wooden structure, was accepted. Wooden pilings were driven into the reef that formed the small island, and atop these a keepers residence and a square pyramidal lighthouse topped by a lantern room were constructed. Keeper Captain McGregor first exhibited the light from whale oil lamps, concentrated by a fourth-order Fresnel lens, on August 2, 1869.

Though visible from a distance of nine miles and found to be quite useful to mariners, the lighthouse, which was given the nickname of the Harbor Wink, was called an infantile structure which more resembles a birdcage than a lighthouse, by Honolulus newspaper, the Pacific Commercial Advertiser. Working in conjunction with a light mounted ashore on top of the custom house, the maligned lighthouse also served as a front range light.

The Honolulu Harbor Lighthouse was situated in the middle of the entrance channel, so ships carrying cargo to and from the port passed on either side. In 1875, the Reciprocity Treaty, a free trade agreement between the United States and Hawai'i, was ratified. This treaty greatly boosted the flow of sugar from Hawai'i to the United States, and pineapples became a second major export a few decades later.

In 1906, after Hawai'i had become a territory of the United States and the Lighthouse Board had assumed control of the islands navigational aids, work began on a new entrance light for Honolulu Harbor. The Annual Report of the Department of Commerce and Labor records the following description of the second harbor lighthouse, which was located on Sand Island and first lit on February 15, 1910.

The structure is rectangular in plan, one and a half stories high  The main floor contains quarters for two keepers, each provided with kitchen, living room, two bedrooms, and a bathroom. There are ample closets and pantries for each keeper. The main entrance and hall are approached from outside by a flight of concrete steps, and there are steps in the rear of the structure for both sets of quarters. The roof is framework, covered in metal tiles. Atop the keepers quarters is the square tower supporting: an occulting fourth-order lens, revolving on ball bearings.

Sixteen years after the new lighthouse commenced operation, a large-scale project was undertaken to provide a modern freight and passenger terminal at piers 8, 9, and 10 in Honolulu Harbor. As part of this project, a tower was constructed to provide offices for the harbor master, pilots, and customs officials. Honolulu Iron Works constructed the towers steel frame for $161,063, while the total cost for the twelve-story structure came to $190,000. The eleventh floor of the tower served as a lookout for the harbor pilots, with balconies on all four sides. Right below the balconies, the word ALOHA was spelled out in large letters, certainly the reason the structure was called the Aloha Tower. Besides its giant greeting displayed for arriving passengers, the tower, the tallest structure in Honolulu when it was finished in 1926, was also topped by a beacon to help captains enter the harbor.

An article in the May 30, 1926 edition of the Honolulu Advertiser provided a detailed description of the tower, including the following lines on its beacon. On top of the tower the harbor light, which is now located on Sand Island, is to be installed, and the light on Sand Island done away with. The light will be known as Honolulu Light, and will be visible to ships at sea for many miles. The light atop Aloha Tower, which consisted of an automatic electric light with an acetylene gas auxiliary light, was put in commission on July 1, 1926. The new light cost roughly $50 per year to operate and maintain, saving the government about $1,500 when compared to the expense of having a keeper on Sand Island.

Besides its light, the Aloha Tower had several other functional features. A giant clock face was mounted on each of the towers faces, just below the ALOHAs. The master clock was powered mechanically by large weights suspended in the tower. If a ship or person was too far away to read the clock, two other means of time synchronization were provided. A time ball was lowered to the bottom of the forty-foot mast atop the tower each day at noon, and the blast of a siren was sounded at 7 a.m., noon, and 4 p.m. The novelty of the blasts was soon lost on nearby residents, and use of the siren was restricted to welcoming ships and warning residents of dangers from such sources as tsunamis and fires.

A yardarm was also used atop the tower for signaling messages to mariners. When an orange ball and cone were both displayed, the harbor was closed. Right-of-way belonged to incoming ships when just the ball was displayed, and outgoing ships had the right-of-way when just the cone was present.

The Aloha Tower received little damage during the bombing of Pearl Harbor, but shortly thereafter, it was camouflaged with brown and green paint, and its light was extinguished for the remainder of the war.

A reopening celebration for the tower, which was returned to a uniform color, was held in 1948. By the late 1960s, tall hotels and business buildings were crowding the tower, and the Coast Guard decided to discontinue the beacon atop the Aloha Tower and install one on a 220-foot television tower. This navigational aid served until 1975, when the present Honolulu Harbor Light was established on a metal pole at the end of Pier 2.

Ron Billian serviced navigational aids on Oahu from 1967 to 1969 as a BM2 in the Coast Guard. By the time of his service, the light had been moved from the Aloha Tower to the TV tower. Ron remembers how difficult it was to service the TV tower light. "It was one of the hardest and most dangerous lights to climb. There was a concrete base and you had to have a wooden step ladder. You would climb the ladder then step over onto a rung on the tower. The tower was round and rungs were on each side. Your legs had to be spread apart and you had to push up with your one leg and pull with your arms. We had a safety belt, and we wore it hooked to a metal pole running up the center of the tower. Once you got up to where the light was you had to unhook from the safety belt and step onto the platform where the light was - you would reverse the steps to come down. The danger was unhooking and rehooking from safety belt. I will confess I never made it up to the light. I'm 5ft. 7in. tall, and I didn't have the height or the strength to climb this tower. I tried more than once. We would get a sailor from the Coast Guard base that was also a diver, and he would climb the tower."

Owned by the State of Hawai'i, the Aloha Tower was extensively renovated in 1994, at no cost to taxpayers, by the developer of the adjacent Aloha Tower Marketplace.

For a larger map of Minor light of Oahu - Aloha Tower Lighthouse, click the lighthouse in the above map.

Take the Nimitz Highway (92) to downtown Honolulu and turn towards the waterfront on Bishop Street. There is parking in the area, and the Hawaii Maritime Center is next door at Pier 7.

The lighthouse is owned by the State of Hawaii and run by the Aloha Tower Marketplace. Grounds/tower open.


We tried to visit the Aloha Tower observation deck, but the elevator dropped us off in a stairway that led to a locked door instead of taking us all the way to the top. Maybe our personal elevators weren't going all the way to the top that day either, since we had just endured a multi-hour flight to the islands. However, we weren't the only ones having problems, as there was a group of confused, non-English speakers in the sweltering stairway as well, and all we could do was gesticulate our confusion to each other.


I am still not convinced this is a lighthouse, but we visited it anyway. The tower elevator is one of the first ever made in my opinion and very tiny so if you are claustrophobic, take the pictures from the perimeter of the building. The observation deck of the nearby maritime museum also has a great view of it.