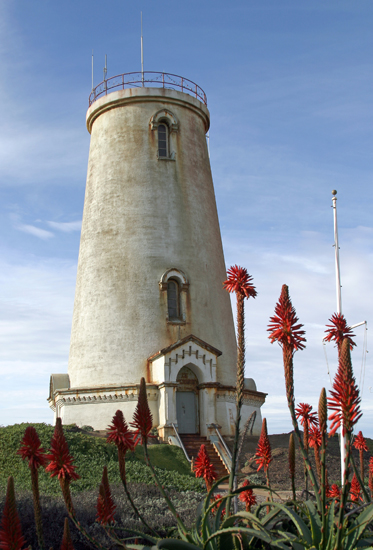 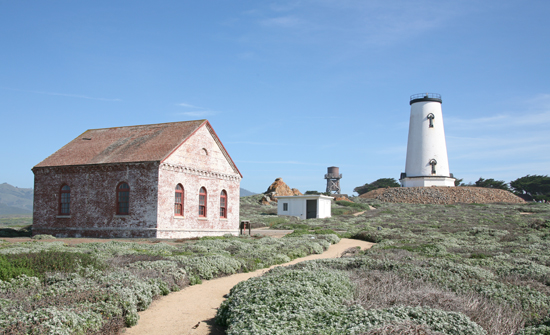 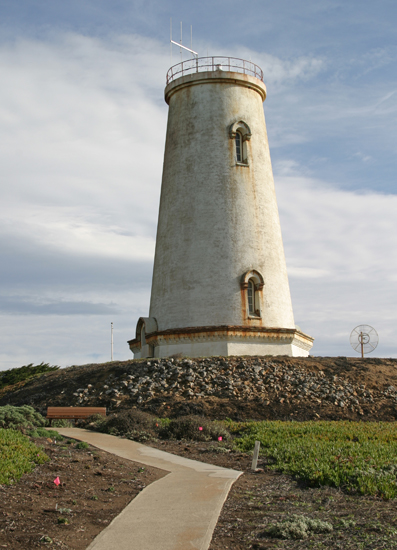 Few tall, classic lighthouse towers, typical of the Atlantic Seaboard, were built on the Pacific Coast, since the high bluffs along much of its extent provided most of the necessary height for a light. The lighthouses at Piedras Blancas, Pigeon Point, and Point Arena, were the only tall, seacoast lighthouses built in California. A whaling station was established near San Simeon in 1864 to surprise the huge creatures as they hugged the nearby shoreline during their annual migration. By the early 1870s, San Simeon Bay had also become a substantial port, as lumber, farm produce, and Cinnabar, an ore mined for its mercury, were exported from Californias Central Coast. The real reason for building a lighthouse at Piedras Blancas, however, was not for local commerce but to serve the maritime traffic traveling up and down the California coast.

In 1871, the Lighthouse Board noted: [Piedras Blancas] is about midway between Point Conception and Point Pinos Light-houses, distant one hundred and fifty miles from each other. But Point Pinos is only a harbor Light, and the coasting steamers take their departure from Piedras Blancas, and keep so far out that Point Pinos Light is not seen, and it may be considered that there is no sea-coast Light between Point Conception and Pigeon Point, which are nearly two hundred miles distant.

The Lighthouse Board requested $75,000 for a first-order light and fog signal at Piedras Blancas, and this sum was granted by Congress on June 10, 1872. Piedras Blancas was named for the large white rocks located just offshore that undoubtedly served as a landmark for mariners, and the point was part of land parcel reserved by the government in 1866.

On April 25, 1874, material for the tower was landed through the surf at the point, and a crew of around thirty began work on the ornate tower. Leveling the rock on the point to accommodate the tower proved more difficult than expected, as the rock was so hard as almost to resist the best tempered drills. The conical tower had an inside diameter of twenty-four feet at its polygonal base and tapered to a diameter of just over twelve feet at the parapet. A first-order Fresnel lens manufactured in Paris by Henry-Lepaute and containing eight flash panels was installed atop the 100-foot-tall Piedras Blancas Lighthouse and first illuminated on February 15, 1875. The lens revolved once in two minutes to produce a white flash every fifteen seconds.

As funds were depleted before completion of the stations fog signal and dwelling, the keepers were forced to live in the construction workers shanties, until $15,000 was secured for the construction of a dwelling that was completed in 1876. The large, two-story, Victorian dwelling had twelve rooms, stood fifty feet northeast of the tower, and housed three keepers and their families, though it was only designed for two.

While the keepers now had comfortable accommodations, they still lacked one critical thingwater. When rainfall proved inadequate at filling the stations water tanks, water had to be purchased and hauled in at a considerable expense. After Congress appropriated $2,000, a well was sunk at the station, and a pump powered by a windmill was erected over it to help supply the stations water.

The Lighthouse Boards report for 1880 noted that on two occasions during the previous year, large birds had crashed through the glass panes of the lantern room, and the falling pieces of glass had chipped and scratched the lens.

An act approved on March 3, 1903 appropriated $15,000 for the establishment of a fog signal at Piedras Blancas and the erection of a second dwelling, as an additional keeper would be needed to run the station. The head keeper took up residence in the new dwelling, while the three assistants shared the old triplex. The third assistant keeper had but three small rooms widely separated, one being on the lower floor and two on the upper floor. Lighthouse Service records from 1921 noted the following about the accommodations for the assistants: Great trouble has been experienced in keeping assistants on this station on account of the congested condition and the trouble which constantly arises between assistant keepers families.

A redbrick fog signal building was built 170 feet west of the tower in 1906 to house a twenty-horsepower oil engine and air compressor for sounding a ten-inch whistle. The fog signal was commissioned on April 10, 1906 and produced a two-second blast every twenty seconds when needed. A duplicate fog signal plant was installed in the building in 1908.

To allow quick communication between the keepers, an intercommunicating telephone system was set up between the lighthouse, fog signal building, and the residences. A concrete oil house was built near the fog signal building in 1908 to store the volatile kerosene used for the light, and the following year, a barn/garage was built a couple hundred feet north of the tower.

In 1916, the Fresnel lens was modernized by rearrangement of panels, and a new set of ball-bearing chariot wheels was installed. The flash panels were repositioned in pairs with opaque panels between the pairs, creating a signature of a double-flash every fifteen seconds.

Stephen H. Morse, a Navy veteran, was transferred from Farallon Island Lighthouse to become the first head keeper of Piedras Blancas Lighthouse. Upon Keeper Morses death, Captain Lorin Vincent Thorndyke was made head keeper in 1879. Thorndyke was born in Maine in 1839, and, before accepting the assignment at Piedras Blancas, he had circumnavigated the globe five times and served at several other lighthouses in California. Keeper Thorndyke married Elizabeth Jarmon soon after arriving at the station, and two sons, Lorin, Jr. and Emory, were born to them at the lighthouse.

Lorin, Jr. recalls that during two or three summers in the 1880s a schooner from San Francisco anchored off the white rocks near the station to harvest the deep covering of guano that had accumulated over the years. Men were transferred to the rocks in small boats where they would shovel the droppings into sacks, which were then transferred to the schooner. As one can easily imagine, Lorin remembers that a most offensive odor drifted over the station when the guano was disturbed.

After twenty-seven years of service at the station, Captain Thorndyke decided that at age sixty-seven it was time for him to retire. Still in good health, the captain used the noise created by the newly installed fog signal as his official excuse for leaving the station, though Lorin, Jr. later admitted that the noise really wasnt a nuisance for his father.

In the hills southeast of the lighthouse, William Randolph Hearst started construction of his expansive castle in 1919. Piedras Blancas Lighthouse was incorporated into a crest found above the entrance to the living room in Casa del Monte, one of three guest cottages located near the castle. Work on the castle continued until Hearst left San Simeon in 1947. Piedras Blancas Lighthouse also has another connection to Hearst Castle. Norman Francis, son of the head keeper at the lighthouse from 1934 to 1948, was one of several high-school-aged youth in the area employed at the castle for short periods to help with various chores.

On December 31, 1948, a magnitude 4.6 earthquake, with an epicenter roughly six miles offshore, shook Piedras Blancas Light Station. The stress from the temblor damaged the upper portion of the tower, and the lantern room, lens, ornate railing, and beautifully sculpted top section of the tower were all removed. A rotating aerobeacon was placed atop the shortened, capped tower, and the lighthouse returned to service. Following the removal of the lens, the local Lions Club rescued it, reassembled it, and placed it on a concrete pad at their Pinedorado grounds. The majestic first-order lens stood on the pad uncovered for roughly forty years and remarkably suffered minimal damage from the elements or vandals. In 1990, Norman Francis, who had returned to Cambria after a career with the CIA, launched an effort to restore and protect the lens. The Coast Guard took the lens to their station in Monterey, where it was cleaned and restored, and the Friends of Piedras Blancas Light helped construct a modern lantern room, which now houses the lens at the Pinedorado grounds on Main Street in Cambria. In 2021, control of the Fresnel lens passed from the Cambria Lions Club back to the Coast Guard. The Bureau of Land Management has expressed interest in assuming responsibility for the lens.

In 1960, the original Victorian triplex was razed, and four ranch style houses were built for Coast Guard personnel. The 1906 dwelling was sold for $1, relocated to Cambria at a cost of around $1,400, and remodeled for $60,000 to serve as a private residence. The property is now available for overnight stays.

The Coast Guard staffed the lighthouse until 1975, when the tower was automated and the station de-staffed. Since that time, the housing and station have been used to study sea otters and sensitive plant and animal life. Piedras Blancas Light Station was transferred from the Coast Guard to the Bureau of Land Management (BLM) in October 2001. The Bakersfield office of the BLM has indicated that they are developing plans to completely restore the upper portions of the tower, including replication of the lantern room. The first phase of a restoration of the station was completed in early 2012, with $750,000 being spent to paint the lighthouse, inside and out, restore an oil house, and fix up a building to house the Piedras Blancas Light Station Association gift shop. Five layers of specialized coatings were applied to the lighthouse to protect the 137-year-old structure from salt air and strong wind.

In 2012  2013, the fog signal building was restored, and a replica of the stations fifty-foot water tower was built. The fiberglass tanks atop the water tower conceal radio equipment, formerly mounted on the lighthouse, that help various government agencies stay in touch. The next big project is to replicate the towers lantern room.

Just south of the lighthouse is a relatively new elephant seal colony. It is believed that overcrowding at other colonies prompted a group of seals to found the new colony around 1990. From an original population of just nineteen, the colony attracted approximately 10,000 seals in 2000.

Thanks to several varieties of seals along with gulls, cormorants and other winged creatures, the rocks offshore from the lighthouse seem certain to retain the name of Piedras Blancas.

For a larger map of Piedras Blancas Lighthouse, click the lighthouse in the above map.

To see Piedras Blancas Lighthouse: From the turnoff to Hearst's Castle on Highway 1, proceed 5.7 miles north to a locked gate, from which a road leads 0.4 miles to the lighthouse. Tours of the station are held year-round on Tuesday, Thursday, and Saturday mornings. Call (805) 927-7361 for more information. One of the dwellings adjacent to the tower is used by the Western Ecological Research Center. NOAA's Southwest Fisheries Science Center conducts Gray Whale Studies from Piedras Blancas during the annual migration.

To see the lens: From the lighthouse, follow Highway 1 south to Cambria and turn left at the Moonstone Beach Drive/Main Street traffic light. Turn right to stay on Main Street, and the lens will be on your right after a few blocks. The lens is lit and actually rotates on Fridays between 2:00 and 4:00 p.m. and on Saturday evenings from 7:37 p.m. to 8:37 p.m.

The relocated residence that served as the head keeper's dwelling is now available for overnight stays.

The lighthouse is owned by the Bureau of Land Management. Grounds/tower open during tours, dwellings closed.


There is nothing sadder than a decapitated lighthouse. Fortunately, plans are in the works to restore the lantern room to the Piedras Blancas Lighthouse and make it more accessible to the public. Currently, access to the area surrounding the lighthouse is restricted to organized tours. In the hills overlooking the lighthouse is Hearst Castle, which as one of Americas castles is worth a visit.