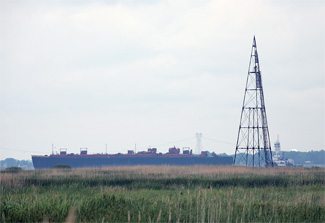 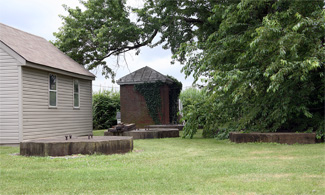 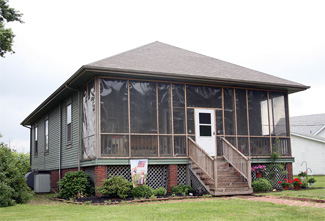 The Annual Report of the Lighthouse Board for 1900 records the U.S. Army Corps of Engineers plan to improve the Delaware River shipping channel from a point nearly opposite Appoquinimink Creek, Delaware, [north] to deep water above Reedy Island, a distance of about 20,500 feet. To properly serve this new, thirty-foot-deep channel, three sets of range lights (Baker, Liston, and Reedy Island New) would have to be established. Two of these range lights, Baker and Liston, would borrow the rear range tower from an existing range now made obsolete. Baker Range was first established on November 11, 1902, using temporary lights consisting of headlight lanterns mounted on posts. Plans for permanent structures had been completed, but construction on these did not get underway until 1904. The Annual Report of the Lighthouse Board for 1904 provides some details of the work accomplished at Baker Range Front Lighthouse, which was situated just inside the levee on the western bank of the Delaware River, 1.3 miles north of Port Penn.

The necessary materials were boated to the site, pile foundations were put in, and the erection by hired labor of the light-house barn, oil houses, and elevated board walks was completed. The mud on the site is 79 feet deep, so that it was necessary to drive the foundation piles about 81 feet. On the foundation piles were placed concrete iron columns of sufficient height to bring the first floor level of each building and the deck level of the walks 11 feet above mean low water. The foundation columns were fastened together with diagonal tension rods, and on them was placed the frame superstructure.

A barn, an oil house, and the lighthouse were built atop the piles at the front range. The lighthouse consisted of a two-story, square dwelling topped with a hipped roof. Each floor of the lighthouse had three windows on the north and south walls, and two windows on the east and west walls. The front range light was focused downriver from the center window of the top floor at a focal plane of twenty-five feet above mean low water and replaced the temporary light on September 16, 1904. A curtain occulting apparatus was used to produce two seconds of white light, followed by an eclipse of one second.

Baker Rear Range Lighthouse was located roughly 2,000 feet north of the front light and a little over a mile south of the Chesapeake and Delaware Canal. The tower for the rear range was relocated from the Reedy Island Old Rear Range Station that was discontinued on May 16, 1904 after the opening of the new channel. The keepers dwelling, tower foundation blocks, and a brick oil house all remain standing at the towers former site in Port Penn as shown in pictures on this page.

The Annual Report of 1906 provides the following description of the relocated tower and its new foundation.

This tower is a triangular pyramidal iron skeleton structure 110 feet high. It now stands on a wooden pile and concrete pier foundation surrounded by a circular mound, the top of which has about the same elevation as that of the river levee which it joins. The lamp house, as originally erected, was intended for the use of the lens lantern. This was altered to receive a headlight reflector lantern and a cage to carry this lantern. A lantern platform was framed and placed on the tower just below the level of the headlight lantern when hoisted to position. The headlight lantern and reflector were removed from the temporary lantern post on April 23, 1906, and mounted on the skeleton iron tower.

Though the rear tower stood 110 feet high, its light was displayed a good ways from the top of the structure.

Keeper Willard H. Hall had been the sole keeper of Reedy Island Old Rear Range Lighthouse since it had been established in 1896, and when his station was decommissioned in 1904, he was made the first keeper of Baker Range. The move for Keeper Hall was just over a mile up the river, but the new station, surrounded by mud flats and soggy marshland as opposed to a small town, must have seemed like an entirely different world. Hall remained at Baker Range for less than two years before being replaced by Harry F. Hann on June 10, 1906. Four men watched over the Baker Range Lights during their first four years of operation, with the shortest term of service for these keepers being just a few weeks. As the distance between the front and rear lights at Baker Range was just 760 yards, a single keeper was responsible for both lights, unlike many of the other ranges on Delaware River were each light in the range had at least one keeper.

The lighting apparatus used atop the rear tower could be lowered by a pulley system into a small wooden lamp house at the towers base, where the keeper could refuel his light and make any adjustments to the lantern before hoisting it back into position on the tower. Around the turn of the nineteenth century, the Lighthouse Service deployed a limited number of these economical, skeletal towers, with their novel pulley system for servicing the light. Parris Island and Dafuskie Island, both located in South Carolina, received similar towers before the erection of the one at Reedy Island Old Range, but neither of these towers has survived. In fact, Baker Rear Range Lighthouse might be the only surviving one of its kind.

Fred C. Hill was keeper of the range lights for roughly eight years before they were automated, and during this period he was commended on more than one occasion for assisting people. In one instance, Keeper Hill rescued a man who had fallen through the ice near the station and then furnished the grateful individual medical attention, dry clothes, and food. On September 26, 1923, Keeper Hill saved a man who had sunk up to his armpits in the muddy marshes near the range lights.

The turnover of keepers at Baker Range came to end around 1925, when the lights were automated. A steel skeleton tower fitted with a white slatted daymark was placed near the southern tip of Reedy Island to serve as the new front light for Baker Range. This light, positioned 1.9 miles south of the rear tower, remains active. The mechanism for raising and lowering the rear light on the rear tower has been removed, and Coast Guard crews must now make a harrowing climb up a narrow ladder to service the beacon, which is powered by an electric cable.

The October 12, 1929 edition of Wilmingtons Evening Journal contained an article informing the public that Baker Front Range Lighthouse and the surrounding 7.85 acres of marshland were being offered to the highest bidder. Irving L. Gill, Superintendent of the Fourth Lighthouse District, was to open the resulting bids at his Philadelphia office at two oclock on November 20. Whether anyone submitted a bid for the isolated lighthouse is not known, but all that remains at the site of Baker Front Range Lighthouse are the concrete-filled iron pilings that once supported the stations buildings. The lighthouse could have been relocated and used as a residence or might have just have been demolished on-site.

For a larger map of Baker Range Lighthouse, click the lighthouse in the above map.

From Port Penn, travel north on Highway 9 for 1.7 miles where you will see the tower off to your right. There are walking trails in this area that permit access to the river, and you may find a better view of the tower from one of them.

The former location of Baker Rear Range Light can be found at the north end of Congress Street, which connects to Highway 9 in Port Penn near the highway's 90° bend.