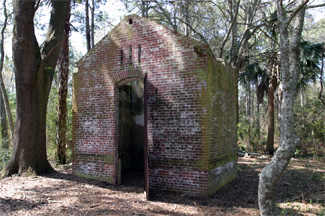 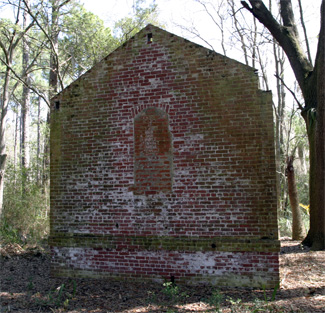 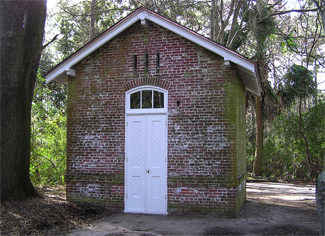 In 1562, the French explorer Jean Ribaut sailed into an impressive, deep harbor, where all the ships of the world could anchor in comfort, and gave it the appropriate name Port Royal. Ribaut built a settlement called Charlesfort and left behind twenty-seven Protestants to colonize the area, promising he would return with provisions. When over a year passed with no word from Ribaut, the settlers built a ship, abandoned the settlement, and set sail for Europe. Hungry and thirsty, twenty survivors, forced into cannibalism to stay alive, were finally rescued by a ship in the English Channel.

Realizing the potential of the area, the Spanish tried their hand at a settlement on the same island in 1566. The colony, named Santa Elena, lasted for a couple of decades, but in 1587, the settlers burned all of their buildings and departed.

The English secured the region in the early 1700s, and in 1715 Colonel Alexander Parris purchased the island that had been home to the French and Spanish colonies. Parris and his son-in-law started cultivating the island, ushering in the era of plantations on Parris Island. Indigo was the first cash crop, followed by the even more lucrative Sea Island cotton. By the 1850s, the island supported seven plantations and over 500 slaves.

Plantation life flourished until Parris Islands neighbors to the north fired on Fort Sumter. Seven months later, on November 7, 1861, Union forces sailed into Port Royal, and, in a battle that lasted just a few hours, the harbor was secured. Port Royal was homeport for the South Atlantic Blockading Squadron during the remainder of the war, and the military has remained in the area ever since.

Military vessels werent the only ships anchoring at Port Royal. Commercial development of the harbor began in earnest in 1874, when the Port Royal Dock, Warehousing, Transportation, and Banking Company was founded. On June 20, 1878, Congress appropriated $20,000 for a pair of range lights on Parris Island to be used in connection with those on Hilton Head to guide ships into Port Royal Sound.

A forty-five-foot-tall wooden tower was placed on the southeastern tip of the island to serve as the front range light, while the rear range lights 131-foot tower was placed roughly a mile to the northeast. Midway between the two lights, a wooden dwelling was constructed for the keepers. As the area between the front range and the dwelling was marshy, an elevated walkway, built on palmetto piles, covered that distance.

The rear range light merits special attention, as it was the first of its kind to be erected. The following description of the tower is from Arnold Johnsons 1889 book, The Modern Light-House Service:

An interesting specimen of these skeleton iron structures was erected in 1881 at Parris Island, Port Royal Sound, South Carolina, and exhibits the rear light of the Paris [sic] Island ranges. Altogether it is the most economical structure of its kind in the history of light-house construction. The plan was born of necessity, it being found that the appropriation made by Congress was not sufficient to put up the kind of structure which it was usual to place in such a position. The light exhibited is simply a locomotive head-light in front of a powerful parabolic reflector. It is claimed, however, that it is possible to use on it a lenticular apparatus. The tower is composed of columns, sockets, struts, and tension-rods, framed in the form of a triangular pyramid. It rests on six circular disks, anchored to a concrete foundation. The top sections of the side facing the channel, for which the tower is the guide, are provided with horizontal slats to increase the visibility of the beacon by day. The light, which runs up and down in rails in the plane of the structure, is housed by day and at night is hoisted to its place at the apex of the triangle by machinery worked in the oil-house. The large foundation-plates are about 40 feet 4 inches apart. The focal plane of the light is 120 feet above the sea level, but the top of the structure is 132 feet from the ground. The cost of the iron work set up is $9,400, and that of the structure complete and lighted about $12,000.

Cooper Manufacturing Company of Mt. Vernon, Ohio fabricated the iron tower, and John Doyle, an employee of Cooper Manufacturing, traveled to Parris Island to direct its assemblage. A year later, Doyle would return to the South and oversee the construction of a similar range light on Daufuskie Island, just a few miles south of Parris Island.

The lights were lit for the first time on August 1, 1881, by Martin Leavy, first keeper of Parris Island Range Lights, and assistant keeper William Thomas. Thomas assumed the role of head keeper in July 1884, but passed away just a few days later. The third head keeper of the lights was Charles Anderson, who served from 1884 to 1912, and he was followed by Paul Wright, who was black and served as keeper until at least 1921. The range lights were discontinued in 1923, which yielded an annual saving of $1,250.

During its short life, the Parris Island Station was threatened by erosion and frequently damaged by storms. The bridge between the front range light and the dwelling had to be rebuilt in 1884, and two years later, 1,416 linear feet of the plank walk had to be extensively repaired. In 1888, 700 linear feet of new elevated plank walk was built, and 2,500 linear feet repaired. Similar repairs continued every couple of years.

On the evening of August 31, 1886, Keeper Charles Anderson felt the effects of the Charleston Earthquake. The stations clock stopped at 9:27 p.m., which is when the first shock was felt at the station. Keeper Anderson was in the dwelling reading when he felt the shaking and immediately ran out. The motion continued for about a minute and a half and was accompanied by a rumbling noise like thunder. Nearby cows started to bellow just before the shock came.

No damage from the earthquake was noted, but two years later, while the keeper was changing a worn hoisting rope, the carriage for the locomotive headlight was allowed to escape from the preventors and was badly injured in the resulting fall. The carriage was sent to Charleston for repairs, but the light was still exhibited during its absence.

Storms and high tides slowly eroded away the site of the front beacon, forcing the replacement of the wooden towers foundation in 1892. In the Annual Report of the Light House Board for 1900 and 1902, it was recorded that the front range light would soon need to be moved farther back along the range line. In 1901, a wooden revetment, 80 feet long, was built in front of the beacon to lessen the erosion of the site by high tides. It is believed that the front beacon was eventually abandoned, and a new light exhibited near or at the keepers dwelling until the lights were deactivated.

In 1917, the Marine Corps was reportedly given permission to occupy the two-acre reservation associated with the keepers dwelling, and in 1923, a five-year lease was given to W.G. Gilliam on a ten-acre site that included the rear range light. The whole station was transferred to the Navy in 1928, and then to its present owner, the Marine Corps, in 1938. Today, all male Marines east of the Mississippi River and all female Marines receive their training on Parris Island.

There is no record of exactly when the rear tower and keepers dwelling were dismantled. The only substantial remnant from Parris Island Range Lights is the brick oil house and a mound of bricks at the site of the dwelling. To reach the oil house today, one must travel across abandoned runways and down a dirt road to the thickly forested area where the oil house is hidden.

In 2005, the roof and door of the oil house were missing, and the rear window through which the lantern was passed out each night had been bricked up. However, the sturdy red brick walls remained standing. Later that same year, the oil house underwent a three-month restoration costing $50,000. The bricks were removed from the window in the rear of the oil house, new windows were installed along with a new door, and a new roof was placed atop the redbrick structure. The oldest structure on Parris Island has finally received the respect and attention it deserved.

For a larger map of Parris Island Lighthouse, click the lighthouse in the above map.

From Highway 170 on the east bank of the Broad River, go south on Highway 802 for roughly 3.5 miles where you will see the entrance gate to the Marine Depot. As access to the area surrounding the oil house is restricted, permission must be obtained from the base for a visit.

The grounds are owned by the Marine Corps. Grounds closed.