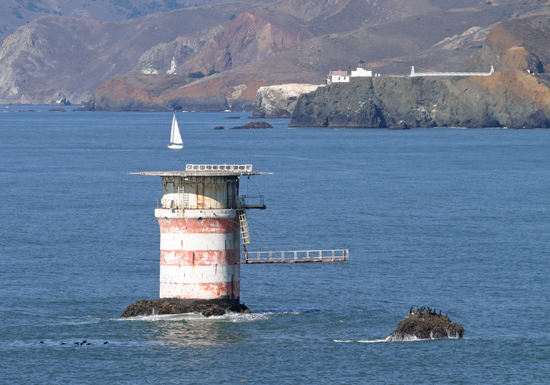 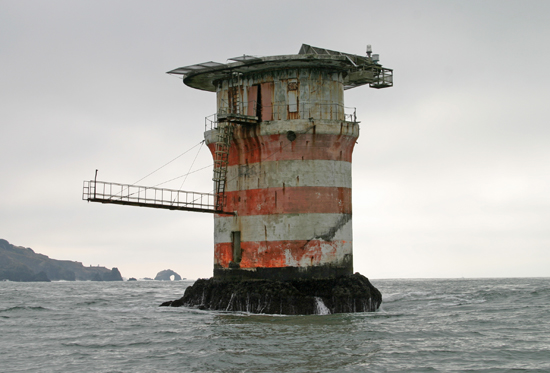 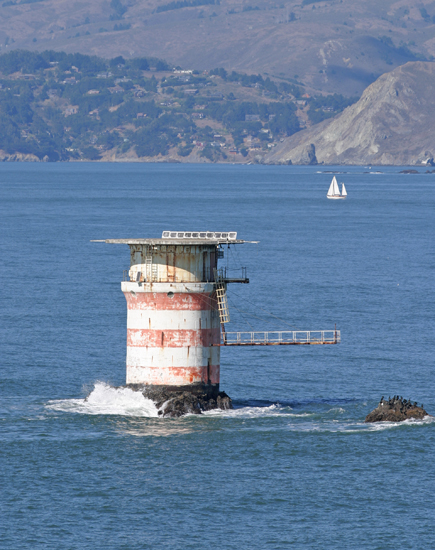 The southern side of the entrance to the Golden Gate is dotted with a family of dangerous wave-swept rocks that includes Black Head Rock, Lobos Rock, and Pyramid Rock. The two northernmost, and thus most dangerous to navigation, are Mile Rock and Little Mile Rock, known together as Mile Rocks. Located roughly a half-mile from the closest shore, it seems Mile Rocks are so named because the rocks are one mile south of the main shipping channel leading into San Francisco Bay. In November 1889, the Lighthouse Service placed a bell buoy near the rocks, but the strong currents in the area would pull the buoy beneath the surface of the water and even set it adrift. The bell was withdrawn in May 1890, and frustrated lighthouse engineers concluded that the rocks must always be a menace to navigation as long as they exist, as building atop the rocks or dynamiting them below the surface didnt seem practical. Then on February 22, 1901 the City of Rio de Janeiro, inbound from Hong Kong in heavy fog, struck Fort Point Ledge and sunk in just eight minutes. Of the 210 people aboard, 128 were lost. The Lighthouse Board concluded that the shipwreck, the worst in San Franciscos history, might not have occurred if a fog signal could be heard considerably seaward of the ledge.

The tragic wreck provided ample motivation to overcome the obstacles inherent in constructing a lighthouse atop Mile Rock, and on June 28, 1902, Congress appropriated $100,000 for the work. With funding in place, Colonel Thomas H. Handbury, engineer of the Twelfth Lighthouse District, drew up plans for the lighthouse, whose construction was expected to be nearly as challenging as St. George Reef Lighthouse and Tillamook Rock Lighthouse.

James A. McMahon of San Francisco was awarded the contract to build the foundation in 1904, and he set off with a skilled crew to assess the construction site. After seeing the seagirt rock on which the lighthouse was to stand, the crew promptly quit. A second crew, consisting of deep-sea sailors recruited from San Franciscos Wharf and thus more familiar with the sea, was assembled, and work began in September of that year. The small schooner Rio Rey was anchored near the rocks and served as floating quarters for the workers.

A good portion of Mile Rock, which measured forty by thirty feet, was blasted away to provide a level foundation. Next, four-feet-thick walls made of reinforced-concrete enclosed within steel plates were built to a height of thirty-five feet to form the base of the tower. A cistern and fuel tanks were located within the substructure, and a stairway led down to a heavy oak door enclosed in a bronze frame that provided access to the base of the foundation. The difficulty in working on the exposed location was noted by the Lighthouse Board: There was hardly a day during the year on which at some time the waves did not break over the rock. There were many days when no landing could be effected and many others when the party, after landing, was driven off with only a few hours of work accomplished. On several occasions it was necessary to call upon the neighboring life-saving crews to take the men off the rock. A full day of eight hours passed upon the rock was exceptional until after the substructure was completed in June, 1905.

Atop the elliptical foundation, a three-tiered steel tower, capped by a lantern room, was constructed. Looking at historic photographs of the lighthouse, it is easy to understand why it was called the steel wedding cake.

The first tier of the tower housed the oil engines and compressors for powering the stations fog signal. The second tier was composed of two stories, with an office kitchen, and day room on the bottom floor, and two bedrooms and a bathroom on the second story. The third tier was used for storage and as a watchroom. The caisson and first tier were both oval, while the upper tiers and lantern room were circular. The lantern room with its crosshatched window panes protected a third-order, L. Sautter & Co. Fresnel lens, which was first lit on February 15, 1906. A Notice to Mariners announced that the light would be a fixed red light with a focal plane of just over seventy-eight feet and that the stations ten-inch whistle would sound a three-second blast every thirty seconds during thick or foggy weather.

The Biturine Company of America coated the lighthouse in white enamel and promoted this fact in an advertisement. The company boasted that seven years of abuse at Mile Rocks had proven the durability of their product.

Head Keeper Isaac Knutsen took charge of Mile Rocks Lighthouse on December 28, 1905, accompanied by three officials from the Lighthouse Board. Just how difficult accessing the lighthouse could be was soon illustrated, as when the board members were ready to return to the mainland, the sea was so stirred up that it was impossible for the launch to pick them up. The three men were forced to spend the night at the lighthouse before conditions permitted them to leave.

Less than a month after the light had been activated, Assistant Keeper William P. Holmes nearly lost his life when heavy seas swamped his skiff as he was returning to the station. Without a boat to rescue him, the other two keepers at Mile Rocks watched helplessly as Holmes was swept out to sea, clinging to the keel of his overturned skiff. Just as he reached the bar, which was breaking fiercely, a pilot boat spotted him and pulled him from the frigid water.

Mile Rocks Lighthouse was always a stag station, as there was hardly enough room for the resident three keepers themselves let alone their families. The first woman to sign the register at the lighthouse was Mabel Norris Hull of the University of California, who performed the perilous feat of boarding the lighthouse in November 1908. Access to the station was accomplished by the door at the base of the foundation in calm weather or by climbing a Jacobs ladder suspended from the stations derrick in rough weather. Before completing the thirty-foot ascent up the ladder, the keeper was occasionally knocked off by the bobbing delivery boat.

Couples came up with some innovative methods for maintaining contact. One keepers wife would walk the family dog out to Lands End in the evenings and use a flashlight to signal a greeting to her husband.

August Nelson was serving as second assistant at Mile Rocks in November 1912, when he was suddenly stricken with intense pain. The keepers sounded the stations whistle and fired rockets heavenward to attract attention, and Captain Anderson of the government tug Sequoia sailed out to find Keeper Nelson writhing in pain. Nelson was taken to a hospital where he was found to be suffering from ptomaine poisoning, contracted through tainted meat.

The keepers at Mile Rocks played a key role in rescuing a few people who found themselves in trouble near the station. In 1916, Keeper Gottfrid Olson and his two assistants, Platon Chekles and Leslie G. McKay, were recognized for saving a man who had either jumped or fallen overboard from a passing steamer. Three years later, Keeper William H. Hicks prevented the drowning of three men whose canoe capsized near the lighthouse.

An air diaphone replaced the stations whistle in 1919, and two years later a telephone connected to the U.S. Army Exchange at Forty Mile was installed at the lighthouse. This YouTube video shows a foghorn from Mile Rocks Lighthouse on display at the Presidio Museum.

In the 1960s, the Coast Guard developed plans to automate Mile Rocks Lighthouse that called for the upper two tiers of the tower to be demolished and the top of the truncated tower converted into a helicopter landing pad. San Francisco Supervisor William Blake and the Conference of California Historical Societies both protested the automation plans, but the Coast Guard was determined to proceed with the cost-saving measure. In 1966 and at an expense of $110,000, the Coast Guard dismantled the lantern room and top two tiers of the lighthouse and constructed the landing pad. The San Francisco Maritime Museum tried to acquire the top forty feet of the lighthouse and place it on display at the foot of Hyde Street, but as saving the upper portion of the tower would have added $87,000 to the $110,000 contract for refurbishing the lighthouse, the living quarters were scrapped.

Although the base of the tower is now painted with colorful orange and white bands, the beauty of the structure was greatly compromised when the tower was decapitated. One can only speculate at what role this truly unique tower would have today, if it had remained intact. One can view still view one of the more attractive remnants of Mile Rocks Lighthouse, as its lens is currently in use at Old Point Loma Lighthouse in San Diego.

For a larger map of Mile Rocks Lighthouse, click the lighthouse in the above map.

Mile Rocks Lighthouse can be seen in the distance from Point Bonita. A closer view can be had by taking Lincoln Boulevard, the first Highway 101 exit south of the Golden Gate Bridge, and heading west. The road will become El Camino Del Mar, which you can follow to the area around Lincoln Park. We parked and hiked down to the bluffs above the water to get a better view of the light. Be warned, as we unexpectedly discovered the shoreline in this area appears to be clothing optional. A good way to see all the lighthouses of San Francisco Bay is aboard the Motor Launch Plover.


I wonder if the keepers, after being confined in the tower for an extended period, ever gazed into San Francisco Bay at the prison on Alcatraz and joked if perhaps the prisoners there weren't better off than themselves, as at least their meals were prepared for them.


The best view of the light really is from the bluffs, but unfortunately the path to it goes past a spot where naked people sunbathe in something that looks like big rock bowls. Your senses just reel. It may be best to visit this one on a very, very cold day so the light is the only thing that is exposed.