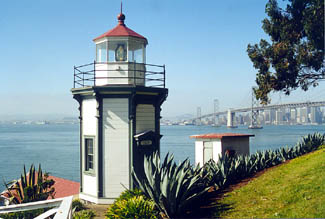 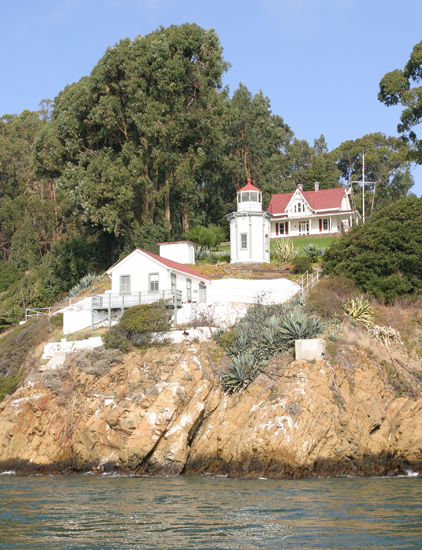 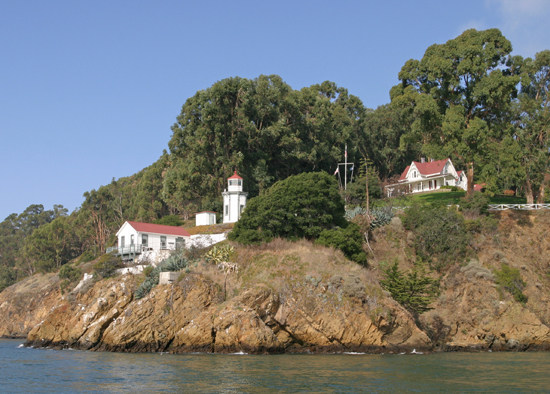 It has been said that the small island situated roughly midway between Oakland and San Francisco has had as many names as a modern divorcée, and also in like fashion, has reclaimed a former name. The island was reportedly first known as Sea Bird Island, but later, it would be named for two other island dwellers often seen on its steep slopes. The early Spaniards called the island Yerba Buena, translated good herb, in reference to the curative powers of a mint found growing on the island. When the forty-niners startled settling in the area, goats were pastured on the island, and soon the island was being called Goat Island. The Board of Geographic Names officially changed the islands name from Yerba Buena Island to Goat Island in 1912, which caused Harry W. Rhodes, Inspector of Lighthouses in California, to remark: It is my opinion that the people of San Francisco and vicinity will regret that the geographic board has changed the name of the island. He was correct, and around 1931 the old Spanish name was officially restored. A resident sailor was dressed up as a goat and ceremoniously pushed into the bay, signaling the end of the name Goat Island.

The islands lighthouse connection began in 1873 when the Lighthouse Service moved the districts depot from Mare Island, at the mouth of the Napa River, to the southeast side of Yerba Buena Island. From the depot, a lighthouse tender was regularly dispatched to the light stations up and down the coast. The arrival of the lighthouse tender at a station was a mixed blessing. Not only did it bring desired items like paychecks, mail, food and other supplies for operating the station, but it also brought the notoriously strict lighthouse inspector, who would give the station a thorough going-over. The lighthouse tenders Shubrick, Manzanita, and Madrono were assigned to the depot over the years. Later, the depot was also used to service lightships, which were situated near dangerous sections of the west coast where it was impractical to build a lighthouse.

In 1874, the fog bell from Point Conception, where a steam whistle had recently been installed, was placed on the southwest end of Yerba Buena Island and struck by a Stevens clock apparatus. That same year, Congress appropriated $10,000 for a lighthouse and fog signal for the island, and the following year, a ten-inch steam whistle was installed on a level notch carved out of the rocky island to replace the fog bell. Just above the notch, the unique, octagonal Yerba Buena Lighthouse was built in a Victorian style. This short, ornate tower was constructed of wood, and has the year of completion, 1875, mounted above its doorway. A fifth-order, L. Sautter & Co. Fresnel lens from Yaquina Bay Lighthouse, which was discontinued in 1873, was mounted in the lantern room. About eighty yards farther up the islands slope and constructed in a similar style to the tower stands the historic two-story keepers dwelling. This historic postcard shows the station with all its structures intact. Note that the cliff face in front of the lighthouse was painted white to help mark the island.

The light and fog signal were placed in operation on October 1, 1875, with H.D. Tuttle serving as the first head keeper. Water for the steam whistle was pumped by hand through iron pipes from a spring at the lighthouse depot to a 10,000-gallon tank at the signal-house. The original fog bell was kept on hand in case the whistle failed until 1880, when it was swapped for a smaller bell at Fort Point. That same year, a Hains mineral-oil lamp replaced the Funck lard-oil lamp used inside the Fresnel lens. A 16,000-gallon water tank, fed by a steam pump, was placed atop the island in 1882 to provide the depot and lighthouse with an adequate water supply and eliminate the need for the keepers to pump water by hand. The fog signal building was expanded and remodeled in 1886 to make room for a duplicate steam whistle.

The keepers dwelling was enlarged in 1897 by building a room in the ell between the front and rear portions of the structure, and in 1912, the intensity of the stations light was increased by substituting a fourth-order lens for the original fifth-order lens.

To bring supplies for the lighthouse and fog signal, the lighthouse tender made what was called the shortest tender run, a voyage of just a couple hundred yards around the island. At the stations landing, a derrick with a steam powered winch would hoist up the sacks of coal and other needed supplies. Food shipments would be brought up the goat trail, a path that connected the station to the depot.

Keeper John Kofod served two stints at Yerba Buena. During his service as assistant keeper, his only child, Anna, met and married Walter Fanning, a radioman at the Naval Radio Station on the island, and the Kofods first grandchild, also named Walter, was born in the keepers dwelling. In 1914, Kofod accepted an appointment as head keeper at East Brother Island. He would serve on that smaller island, just up the bay, until 1921, when he returned to Yerba Buena as head keeper.

On the afternoon of July 17, 1909, Assistant Keeper Kofod was sitting in his kitchen in the keepers dwelling when he was startled by the crackling of burning timbers. Greatly alarmed, he rushed to a nearby window and discovered that the roof and eaves directly above him were on fire. Kofod called to his wife and daughter, who were upstairs with him, and then alerted Keeper Herbert Luff, who was downstairs with his family. Captain Lockyer, who was approaching the island aboard the navy tug Vigilant, spied the flames at the same time as Keeper Kofod and promptly sounded a fire alarm on the ships whistle, which brought the men from the islands Naval training station running. A three-inch fire hose was attached to the tugs engines and drug up the hill to fight the fire, and smaller hoses were run from the water tank atop the island. While several men battled the blaze, others quickly removed valuables and furnishing from the dwelling. After an hour-long struggle, the stubborn fire was extinguished, but not before the roof and several rooms in the upper floor were destroyed.

Keeper Kofod was fond of taking his grandchildren down to the fog signal on New Years Eve, where they were allowed to give three long blasts of the steam whistle as a New Years salute to the passing ferries. The children were thrilled as the ferries responded in like manner. Walter Fanning Jr. would later play a key role in helping to save and restore East Brother Lighthouse.

In 1933, a tunnel was bored through Yerba Buena Island to serve as a link between the east and west sections of the Bay Bridge. The bridge was finished in 1936, the same year that construction began on a new island built on the shoals just north of Yerba Buena Island. Composed of mud dredged from the bay and transported down from the Sacramento delta, the island was named Treasure Island for the gold that was likely contained in all that silt. Originally built for use as an airport, the island instead was home to the Golden Gate International Exposition in 1939. During World War II, the island was turned over to the Navy, which used it as a station until 1993.

The fog signal was changed in 1934 from a steam whistle to a type C diaphone, with an electric siren serving as a back-up. At this same time, the characteristic of the light was changed from fixed to flashing.

Even with the lights on the nearby bridge, Yerba Buena Lighthouse remains operational to this day. Personnel were removed from the station in 1958 when it was automated. Today, the keepers dwelling is home to a Coast Guard admiral, which is likely why the station is in such excellent condition. The area of the island that served as the lighthouse depot is home to Coast Guard Group San Francisco and Aids to Navigation Team San Francisco.

For a larger map of Yerba Buena Lighthouse, click the lighthouse in the above map.