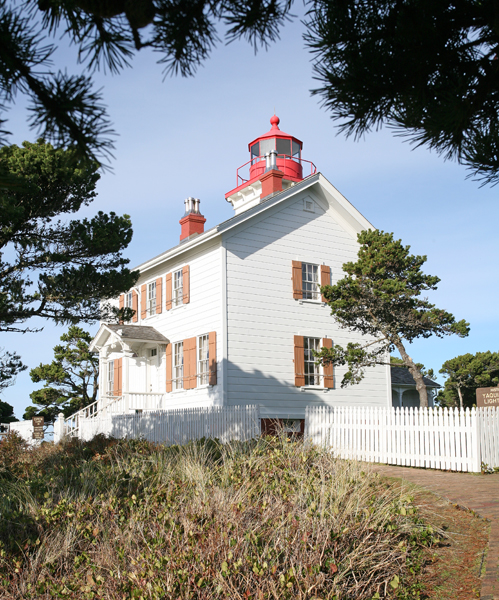 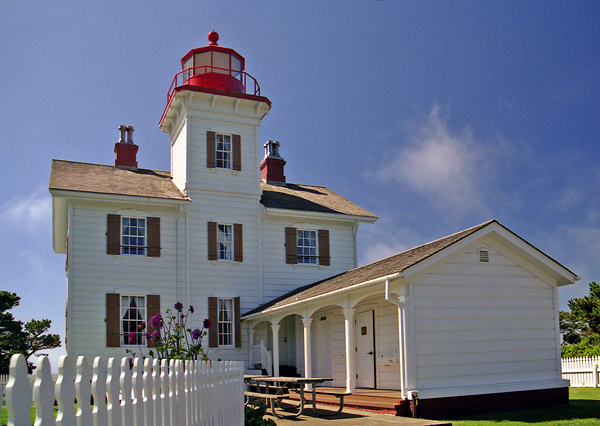 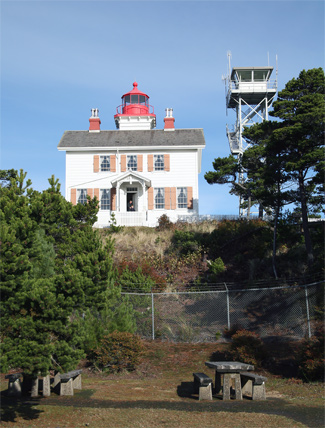 Situated at Yaquina, on the coast of Oregon, is an old, deserted lighthouse. It stands upon a promontory that juts out dividing the bay from the ocean, and is exposed to every wind that blows. Its weather-beaten walls are wrapped in mystery. On an afternoon when the fog comes drifting in from the sea and completely envelopes the lighthouse, and then stops in its course as if its object had been attained, it is the loneliest place in the world.

So begins Lischen Millers story, The Haunted Lighthouse, published in an 1899 issue of Pacific Monthly. Though a fictional account of a girl named Muriel Trevenard, who mysteriously disappeared in the lighthouse after returning to retrieve her handkerchief, the tale has led to a persistent belief that the place is haunted.

Yaquina Bay Lighthouse, a charming two-story clapboard structure, is located on a hill overlooking the northern side of the entrance to Yaquina Bay. It was deserted a mere three years after its light was first lit in 1871, and ever since has been the scene for many a ghostly tale.

The story of the lighthouse begins in February 1869, when Henry W. Corbett presented a memorial from the Oregon legislature to the U.S. Senate, asking for the construction of a lighthouse at the mouth of Yaquina Bay. At this time, Yaquina Bay was a bustling port, the most populated along the West Coast between San Francisco and Puget Sound. The Lighthouse Board determined there was a need for such a lighthouse to guide traffic into the bay, and an appropriation for it was made by Congress in 1870. In April 1871, thirty-six acres were purchased from Lester and Sophrina Baldwin, original homesteaders, for $500 in gold, and construction commenced May 1, 1871.

The lighthouse was quickly built  the tower and dwelling by Ben Simpson of Newport, Oregon, the lantern room by Joseph Bien of San Francisco. Its beacon, produced by an oil lamp within a fifth-order Fresnel lens, shone for the first time on November 3, 1871.

Charles H. Peirce (pronounced Purse), a former Civil War captain in the Union army, brought his wife and six children with him when he started to serve as head keeper at Yaquina Bay Lighthouse. The Peirces ninth child, Kate, was born on March 25, 1872, during the couples first year at the lighthouse.

With increased maritime traffic along the Oregon Coast, the Lighthouse Board decided the area would be better served with a coastal light at Yaquina Head, just four miles to the north. The completion of Yaquina Head Lighthouse in 1873 eliminated the need for Yaquina Bay Lighthouse, and on October 1, 1874, Captain Peirce extinguished the light and moved his family to Cape Blanco, where he would serve as head keeper for ten years.

An effort was made to sell the station in 1877, but the offer received was so small that the property was retained. The following year, the Lighthouse Board noted that the structure was in such wretched condition as to be almost uninhabitable. With the anticipated relighting of the station on the completion of a railroad from Willamette River to Yaquina Bay, the lighthouses roof and outside sheathing were renewed in 1878 to prevent the building from going to ruin. Egenton Hogg had plans to turn Yaquina Bay into a great seaport by making it the terminus of a transcontinental railroad. Hoggs Oregon Pacific Railroad extended from Yaquina Bay to the Cascades before he was forced to declare bankruptcy in 1890.

Yaquina Bay Lighthouse remained empty for fourteen years until the U.S. Army Corps of Engineers used it as a home for John Polhemus, the engineer in charge of the construction of the north jetty, a project that ran from 1888 to 1896. The November 20, 1889 edition of The Morning Oregonian contained the following article entitled The Old Lighthouse Building Struck by Lightning.

Newport, Or. Nov. 17  A severe thunder storm occurred here this morning accompanied by some hail. Lightning struck the old lighthouse building occupied by J.S. Polhemus, government engineer. The building was badly splintered and the furniture demolished. Mrs. Polhemus and child narrowly escaped. They were sitting near the window.

With the lighthouse deserted and in disrepair, ghost stories abounded. Talk circulated of razing the structure, and it likely would have been had the Lincoln County Historical Society not be formed in 1948 to save the lighthouse. For three years, the organization tried in vain to raise the money necessary to preserve the structure. Preparations were again being made to demolish the lighthouse in 1951, when L.E. Warford, an Ohio industrialist raised in Oregon, joined the preservation campaign and spearheaded a movement to get national recognition for the structure. By 1955, the plans for demolition were abandoned, and in 1956, the lighthouse was dedicated as a historical site under the jurisdiction of the Lincoln County Historical Society. For the next eighteen years, the lighthouse served as a county museum despite being in poor condition.

In 1974, Oregon State Parks initiated a year-long, thorough restoration of the lighthouse and had it listed on the National Register of Historic Places. The lighthouse is the only existing wooden lighthouse in Oregon and is believed to be the oldest structure in Newport.

On December 7, 1996, the light was re-lit, using a 250mm modern optic donated by lighthouse historian James Gibbs, who had the privilege of throwing the ceremonial switch. The light is an official U.S. Coast Guard privately maintained aid to navigation and displays a fixed white light visible for six miles.

Friends of Yaquina Lighthouses, formed in 1988, assists the Oregon State Parks Department in managing the lighthouse and offers tours of the house, today in excellent condition and furnished with period pieces. If you take a tour, you will most likely hear a ghost tale or two and may even have your own paranormal experience.

For a larger map of Yaquina Bay Lighthouse, click the lighthouse in the above map.

Take the first exit north of the Yaquina Bay Bridge on Highway 101 in Newport and proceed west into Yaquina Bay State Recreation Site, where Yaquina Bay Lighthouse is located atop a small hill.

Yaquina Bay Lighthouse is open daily, noon to 4 p.m., except for Christmas, New Years, and Thanksgiving. Call (541) 265-5679 to reach the lighthouse. Visitors can climb two flights of stairs to the watchroom, but the lantern room is not open to the public.

The lighthouse is owned by Oregon State Parks and managed by Friends of Yaquina Lighthouses. Grounds/dwelling/tower open.