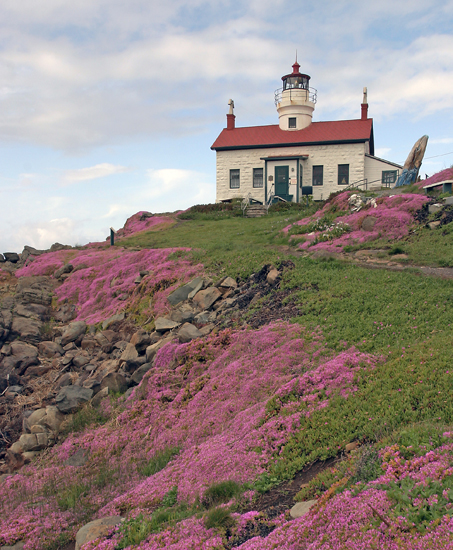 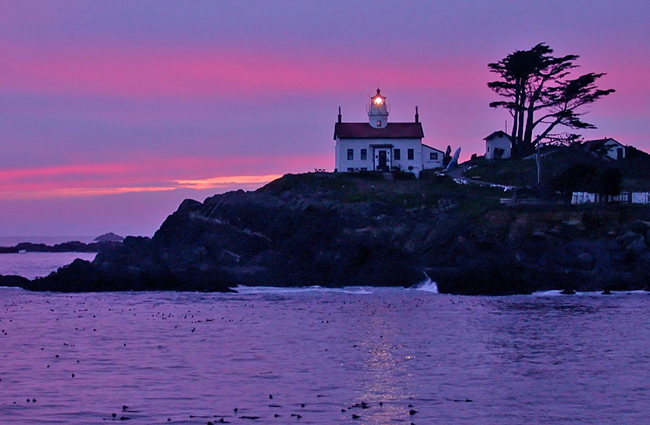 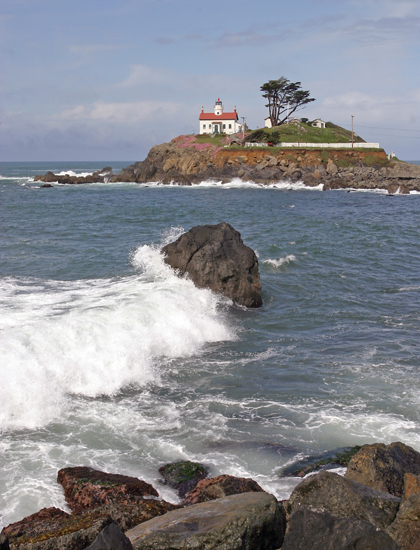 In 1855, the ship America burned in the harbor at Crescent City. Three cannons were salvaged from the wreckage and mounted nearby on the point at the northern side of the harbor's entrance. The cannons, which were often fired during Fourth of July celebrations, resulted in the point being named Battery Point, and although the cannons have since disappeared, the name remains affixed to the point. A second event occurred that same year that would result in another addition to the point. In May 1855, Congress appropriated $15,000 for the construction of a lighthouse on the tiny islet that is connected to Battery Point at low tide by an isthmus.

Although not included in the 1852 contract for the first eight west coast lighthouses, Battery Point Lighthouse was actually lit ten days before Humboldt Harbor Lighthouse, the last of the original eight to become operational. Battery Point Lighthouse, like most of the original eight, was built in a Cape Cod style, with a central brick tower protruding from the roof of a one-and-a-half-story stone keepers dwelling. The fourth-order Fresnel lens in the lantern room first illuminated the night sky at Crescent City on December 10, 1856.

As Theophilus Magruder, the first official keeper, didnt arrive at the lighthouse until fifteen days after it was first lit, a temporary keeper was initially responsible for the light. Magruders starting salary was $1,000 per year, but it was reduced by forty percent on September 1, 1859, prompting Magruders resignation a few weeks later.

Magruder had arrived in Oregon in 1845 with his friend James Marshall, but the pair soon went their separate ways. In January 1848, Marshall was building a sawmill for John Sutter in California when he found a few flakes of gold that triggered the California Gold Rush. Marshalls discovery led to an influx of immigrants that resulted in the establishment of lights along the west coast and the employment of his old friend.

In 1875, the Lighthouse Board published the following on the lighthouse at Crescent City:

This station is in a dilapidated condition, and should be rebuilt if the light is to be continued. The entire wood-work of the keepers stone dwelling must be removed. The ends of many of the lower floor-timbers are entirely gone, and the floor is held up by shores. the light itself is of little consequence. No vessel can enter Crescent City harbor at night, and no vessel bound up or down the coast can, with safety, run near enough to make the light. The rocks off Point St. George are one of the chief dangers to navigation on the coast. A first-order light should be placed there. When that is done the Crescent City station should be discontinued.

With Saint George Reef lying roughly six miles northwest of the harbor, mariners felt that approaching the harbor at night was too risky and typically remained well at sea. A light was established on St. George Reef in 1892, but mariners discovered that the harbor light was still required for safe nighttime navigation.

John Jeffrey became keeper of Battery Point Lighthouse in 1875, during the time when the lighthouses future was uncertain. Jeffrey and his wife Nellie served for nearly forty years at the station, and for part of that time, Nellie was employed as an assistant keeper. They raised four children at the station, and the life must have been somewhat agreeable as their son George also entered the lighthouse service, accepting his first assignment in 1894 as an assistant keeper on nearby St. George Reef Lighthouse. George D. Jeffrey was keeper of Oakland Harbor Lighthouse from 1903 to 1914, which time coincided with the last decade of his fathers service at Crescent City.

In 1879, while Jeffrey was in charge of the lighthouse, a giant wave struck the wooden, lean-to kitchen that had been added to the west side of the lighthouse. The additions chimney was toppled, and the kitchen stove fell to the floor, starting a fire. The Jeffrey family frantically began drawing water with the cisterns pump to fight the fire, but a second wave soon swamped the island, sending enough water down through the chimney hole to douse the flames.

Crescent City Lighthouse was automated in 1953, and a modern 375mm lens replaced the fourth-order Fresnel lens. After automation, the Del Norte Historical Society leased the lighthouse, and the lighthouse eventually became home to a museum and curators.

With its exposed location atop a rocky mound, the lighthouse was often battered by storms and waves. One rogue wave broke three panes of glass in the lantern room and deposited water in the tower.

Remarkably, the lighthouse was not harmed when Crescent City received the worst tsunami damage ever suffered along the west coast of the lower forty-eight states. On March 27, 1964, the strongest earthquake ever recorded in the northern hemisphere struck Alaska near Prince William Sound, generating a series of waves that raced south at a speed of nearly 600 mph. The waves reached Crescent City around midnight with crests of up to twenty feet.

Clarence (Roxey) and Peggy Coons were living as curators in the lighthouse when the waves arrived. Peggy awoke a little before midnight to use the bathroom, and upon looking out the window noted an extremely high tide in the harbor that was illuminated by a nearly full moon. She roused her husband, and they quickly dressed and hurried outside in time to witness the first waves pummel Crescent City.

The following is Peggys account after the third wave had flooded the city:

The water withdrew as if someone had pulled the plug. It receded a distance of three-quarters of a mile from the shore. We were looking down, as though from a high mountain, into a black abyss. It was a mystical labyrinth of caves, canyons, basins, and pits, undreamed of in the wildest of fantasies.

The basin was sucked dryIn the distance, a black wall of water was rapidly building up, evidenced by a flash of white as the edge of the boiling and seething seawater reflected the moonlight.

Then the mammoth wall of water came barreling towards us. It was a terrifying mass, stretching up from the ocean floor and looking much higher than the island. Roxey shouted, Lets head for the tower! - but it was too late. Look out! he yelled, and we both ducked as the water struck, split and swirled over both sides of the island. It struck with such force and speed that we felt we were being carried along with the ocean. It took several minutes before we realized that the island hadnt moved.

When the tsunami assaulted the shore, it was like a violent explosion. A thunderous roar mingled with all the confusion. Everywhere we looked buildings, cars, lumber, and boats shifted around like crazy. The whole beachfront moved, changing before our very eyes. By this time, the fire had spread to the Texaco bulk tanks. They started exploding one after another, lighting up the sky. It was spectacular!

It still seems hard to believe that with all the salvage that floated by us out to sea, the only bit to reach the island was one spool of lavender thread.

Eleven people in Crescent City were killed by the tsunami. Twenty-one boats were destroyed in the harbor, and ninety-one homes in town were damaged. The total cost of all the destruction was in excess of seven million dollars.

The lighthouse survived the ordeal intact, but the following year, the modern beacon that replaced the Fresnel lens in the tower was switched off, and a flashing light at the end of the nearby breakwater served as the harbors navigational aid. On December 10, 1982, the light in the lighthouse tower was lit again, as Battery Point Lighthouse became a private aid to navigation.

For a larger map of Battery Point (Crescent City) Lighthouse, click the lighthouse in the above map.

From Highway 101 in Crescent City, go west on Front Street until it ends at A Street. Turn left onto A Street and follow it to the parking lot at its end. Tides permitting, Battery Point Lighthouse is open between 10 a.m. and 4 p.m., daily April through September and on weekends the remainder of the year. You can call (707) 464-3089 during these hours to learn when the tide permits access to the island. A gift shop and museum, showcasing a fourth-order Fresnel lens used in the tower, are located in the lighthouse. Visitors are permitted to climb to the top of the tower. Note that walking on the breakwater that provides a good view of the lighthouse is not advised. A man was swept off the breakwater by a sneaker wave in December 2008 and drowned.


While in town, you can check out a couple of reminders of the devastating 1964 tsunami. First, between H and K Streets along what was Second Street you will find a memorial plaque at Tsunami Landing listing the names of the eleven people who lost their lives. Along Front Street, you can see a giant tetrapod, over a thousand of which make up the outer breakwater at Crescent City. This tetrapod, which weighs 25 tons, was moved almost three feet by the tsunami.


Definitely worth a day time and sunset picture. Be careful to watch the tide coming back in at the end of the day or you may be spending the night outside of the lighthouse.