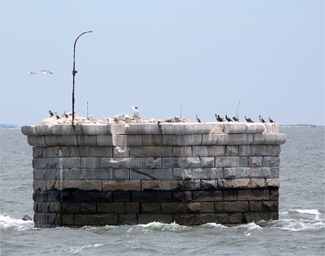 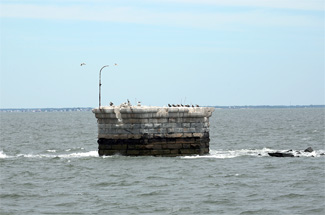 Some people envision the bottom of a lake or bay to be flat or gently sloping like the bottom of a swimming pool. If this were indeed the case, navigating these bodies of water would be much simpler, but, peaks, valleys, ridges, and canyons, features familiar to us land dwellers, are also present in the earths crust that just happens to be presently covered by water.

Roughly twenty-five miles inside the entrance to Delaware Bay, one of these underwater features, a submerged, three-mile-long ridge known as Cross Ledge, lies near the main shipping channel. With a covering in some places of as little as three feet of water, the ledge poses a serious danger to vessels that might stray slightly off course. Starting in 1823, Upper Middle Lightship, appropriately named for its position in the bay, was anchored near the ledge.

Lightships were typically deployed at offshore sites where it was not feasible to construct a lighthouse. These floating lights served well in most conditions, but when ice formed on the water, they usually had to abandon station and seek a safer anchorage. After successfully completing Brandywine Shoal Lighthouse, the countrys first screwpile lighthouse, the Lighthouse Board decided to deploy this same economical design at Cross Ledge and Ship John Shoal also located in Delaware Bay.

Work at Cross Ledge commenced in July 1856, and by the onset of winter the screwpile foundation and an ice-breaker composed of forty-two piles had been set in the shoal. That winter was a severe one, and the entire work was carried away by an ice floe. This loss convinced the board that the screwpile design might be better suited for more temperate climes, and the lightship was able to keep her job.

The Lighthouse Board was still convinced that placing a lighthouse on Cross Ledge remained the best long-term solution, as evidenced in their Annual Report of 1872.

The want of a light-house at Cross Ledge Shoals, in Delaware Bay, is very great, for the reasons, 1st, that the light-ship now stationed there is often driven from her mooring by fields of ice, endangering her own safety and (by absence from her station) the safety of commerce. 2nd, the erection of a light-house to take place of the light-ship, would save the very considerable expense of her crew, and the repairs which from year to year are necessary, and involve much expense. The policy of the board is to replace, in all cases where it is possible, our light-ships by light-houses on the shoals which the former are intended to mark, being more certain in their service and involving much less expense for maintenance.

This reasoning convinced Congress to appropriate $50,000 the following year towards a lighthouse at Cross Ledge. A survey of the lighthouse site was conducted in 1873, and on August 15, 1874, the Governor of New Jersey deeded a circular tract on the shoal, 4.9 acres in size, to the federal government. Work on the foundation for the lighthouse began in the fall of 1874, before the coming of bad weather.

The prudence of replacing Upper Middle Lightship with a more permanent structure was dramatically evidenced during the first part of 1875. The following account involving the lightship is excerpted from the Annual Report of the Lighthouse Board for that year.

On January 14, 1875, she was driven from her station by heavy ice, and took refuge behind Delaware Breakwater. Notwithstanding the great importance of this vessel, she was unable to resume her station until March 26, having been off her station more than two months. On February 11 the ice in the breakwater broke up and dragged a large fleet of vessels at anchor there to sea, and among them the Cross Ledge light-ship. She was carried about five miles to sea, when she was taken in tow by one of the Reading Coal and Iron Companys steamers, and brought in.

During 1875, the foundation pier for Cross Ledge Lighthouse was completed, and a temporary frame structure from which a light could be exhibited was built thereon. The upper two courses of the hexagonal pier are smoothly dressed, each projecting 1 foot beyond the course below and having the lower edge dressed off to a circular arc; the balance of the pier is of rock face masonry, laid in cement, in courses two feet in thickness, and backed with solid masonry. The light on the piers frame tower was activated on December 8, 1875, and the following day the lightship was withdrawn from the station. The temporary tower had been constructed so that the permanent lighthouse could be built around it, without interfering with the operation of the light.

The frame Cross Ledge Lighthouse consisted of a two-story dwelling, painted white with lead-colored trimmings and green shutters. The upper story of the dwelling featured a mansard roof that was topped by a cylindrical watchroom and a black lantern room. Both the first and second floors were divided into four rooms, two on either side of the central hall, through which a stairway passed, and the dwelling was so arranged with closets and other items so that it could be comfortably occupied by a head keeper and two assistants. The lighthouse was effectively two, side-by-side town homes, each with a pantry, kitchen, and living room on the first floor, and two bedrooms on the upper floor. The mansard roof was shingled, with the flat portion being covered with galvanized iron, while the lighthouse was weather-boarded on the outside and lined with vertical tongued-and-grooved boards.

Initially, a fourth-order Barbier & Fenestre Fresnel lens revolved in the lantern room each evening producing a brilliant white flash every fifteen seconds, and a fog bell was tolled every ten seconds during periods of limited visibility. A red panel was placed in the lantern room in 1884 to cover an arc of 192°, and then the following year the whole lighting apparatus was exchanged for one intended for Ludlum Beach Lighthouse, altering the light characteristic to a fixed light for one minute followed during the next minute by four flashes separated by fifteen seconds. On April 10, 1887, the light was changed to fixed white, and then on June 20, 1892, it was changed to a fixed light during periods of seventeen seconds, separated by three-second eclipses.

Cross Ledge Lighthouse wasnt immune to the ravages of ice floes in Delaware Bay. Tons of riprap were dumped around the lighthouse on at least two occasions to replace the protective rocks that had been carried away. The following assessment of the foundation appeared in the Annual Report of the Lighthouse Board for 1894:

The riprap foundation upon which the stone pier which carries the light is built was seriously damaged and rendered unsafe by the gales and ice of the winter of 1892-'93, and an examination disclosed undermined sections of from 10 to 15 feet in length, 5 to 7 feet in width, and 3 to 5 feet in depth, and that nearly all of the heavy face stones covering the riprap had been carried away. The plan of repair carried out was to fill the voids with Portland cement concrete and to surface the riprap foundation with the same material from the base of the pier to low-water mark, a distance of 16 feet, the depth of the concrete being from 10 inches to 2 feet 6 inches above low-water mark and about the same depth below low-water mark. Much of the concrete below low water was laid in bags. As the work could be carried on only at extreme low water and at periods of almost dead calm, it was difficult and subject to frequent delays. Heavy blocks of riprap, weighing from about 2 to 6 tons, are being placed around the station at a distance of about 60 feet from the pier, two approaches to the light being left open.

In the end, it wasnt ice or weather that resulted in the now-vacant pier, but rather, two metal lighthouses , Elbow of Cross Ledge and Miah Maull Shoal, which were built nearby. No longer necessary, Cross Ledge Lighthouse was discontinued in 1910.

The unique lighthouse stood abandoned for decades until the military took an interest in it during World War II. No, it wasnt used as a lookout tower like many other lighthouses, but rather as a target for training missions from the Naval Air Station at Wildwood, New Jersey. During the war, pilots for carrier air groups and fighter-bomber squadrons flew training sorties over Delaware Bay and dropped small practice bombs on the defenseless lighthouse. Amazingly, the lighthouse was still pretty much intact after the war, but the Coast Guard, for safety reasons, reportedly burned what remained in 1962.

Today, the hexagonal base serves as a perch for numerous seabirds, and quite surprisingly the granite pier has no light to warn mariners of this man-made obstacle. What for years functioned as a navigational aid has now become a navigational hazard.

For a larger map of Cross Ledge Lighthouse, click the lighthouse in the above map.

The remains of this lighthouse are best seen from the water. Cape May Whale Watcher and Delaware Bay Lighthouse Keepers & Friends both offer cruises during the summer that pass by Cross Ledge Lighthouse.