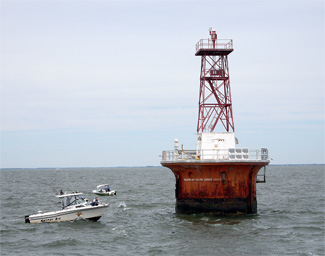 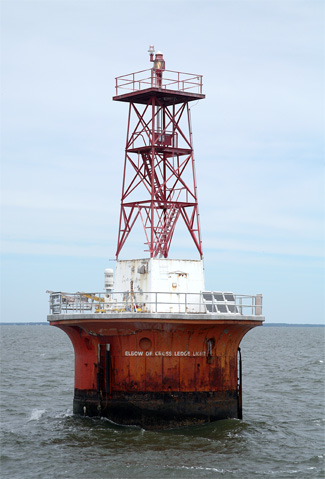 The first lighthouse to mark Cross Ledge was built in the 1870s near the southern end of the submerged navigational hazard. Years later, the Lighthouse Board decided that maritime traffic would be better served with a lighthouse positioned just over two miles northwest of the original Cross Ledge Lighthouse on an elbow of the ledge that protruded toward the main shipping channel, and Congress appropriated $75,000 on April 28, 1904, for a lighthouse and fog signal at Elbow of Cross Ledge.

A test boring sunk to a depth of eight-five feet below the bottom of the bay at the selected site showed that there was a thirty-three-foot layer of hard, compact sand and fine gravel overlying a layer of mud, thirty-six feet thick. Below this, was a stratum of fine stand that was penetrated sixteen feet by the boring. With the boring complete, foundries were invited to submit bids for a cast-iron foundation, but after no satisfactory submissions were received, the project had to be advertised again. The second round of bids was opened on December 18, 1905, resulting in a contract being signed less than two months later with the lowest bidder. Work on the foundation soon began, and the completed metalwork was delivered to the former lighthouse depot on Christiana River near Wilmington, Delaware by January 1907.

To help with construction of the lighthouse, large scows were towed to the site at which a temporary work platform was established. Using the pneumatic process, the bottom edge of the caisson was sunk fifteen feet into the ledge, which lay twenty-four feet below the surface of the bay. Strong currents and rough seas complicated the work, delaying completion of the lighthouse.

A severe storm in September 1907 caught the workers unprepared for such an event. Much of the working platform was swept away, and at least one workman fell into the bay and drowned. One of the scows at the site was torn loose by the storm, and its sole occupant, a government inspector, was finally rescued two days later when a lighthouse tender located the missing scow near Maurice River Cove.

When work stopped in late 1907, the caisson had been filled with concrete up to its fluted upper sections. Portholes in these sections would provide light for the basement of the lighthouse, which would be located within. A temporary, one-story structure, surmounted by a lantern and a fog bell, was placed atop the foundation to mark the incomplete project until work could resume the next year.

Recognizing the remaining funds were insufficient to complete Elbow of Cross Ledge Lighthouse, the Lighthouse Board petitioned Congress for an additional $21,500, which was granted on May 27, 1908. The lighthouse superstructure consisted of a two-story octagonal dwelling built of brick for the keepers, topped by an octagonal, iron watchroom and a circular, helical-bar lantern room. A brass spindle with a platinum tip was put in place as a lightning rod atop the spherical ventilator ball on the lantern room, and a copper ribbon ran from the rod to the iron veranda, which surrounded the first story of the dwelling. The first floor of the lighthouse featured an entrance hall, kitchen, and dining room, while two bedrooms and a bathroom were found on the second floor, and the third story contained a third bedroom and the watchroom.

A fourth-order Barbier, Benard and Turenne Fresnel lens with four panels was installed in the lantern room atop nineteen ball bearings that traveled in a circular v groove. The three keepers from Cross Ledge Lighthouse, Ethan A. Duffield, Julian Bacon, and Harry W. Sheppard, were transferred to Elbow of Cross Ledge Lighthouse, where the official light was first exhibited by them on February 1, 1910.

A 2,000-pound fog bell, cast by the McShane Bell Foundry Co. of Baltimore using 78% copper and 22% tin, was mounted on the deck beneath the veranda, where it was struck every fifteen seconds by a No. 3 fog-bell striker when visibility was limited.

During its first summer of operation, Elbow of Cross Ledge Lighthouse received several visitors from both the Delaware and New Jersey shore. An article in the July 25, 1910 edition of the Bridgeton Evening News noted that twenty people had paid a visit to the lighthouse on the previous day.

Timothy Campbell, with his speedy naphtha boat, the Lillian C., took several from Fortescue out to the light who hailed from Bridgeton and Philadelphia, while a Delaware launch brought out quite a number of visitors. The parties were shown over the light station and expressed their appreciation to the keepers for their courtesies in explaining the house. The keepers at the new Ledge take great pride in showing parties over the house, and the neatness in which the place is kept reflects great credit upon the men in service.

An article in the New Castle News, tells how Head Keeper Julian Bacons lighthouse career nearly ended one Sunday in July 1916, when he departed Elbow of Cross Ledge Lighthouse to enjoy his monthly leave with his family in Laurel, Delaware:

About four miles from the lighthouse his motorboat stalled and started to drift. Although Captain Bacon saw the smoke of steamers several times, he did not get close enough to any vessels to signal for help. The open boat, the hot sun, and the lack of food and water nearly drove the man crazy. Finally, late Wednesday afternoon, he sighted land and swam to the shore, where fishermen found him on the beach.

Keeper Bacon managed to survive for three days and three nights with little water and only enough food for one meal, and he would continue to serve as a lighthouse keeper for another seventeen years before retiring from Cherry Island Rear Range Lighthouse in 1933.

The station was electrified in 1932 through the installation of a duplicate set of 800-watt lighting plants. A 32-volt, 250-watt electric lamp was placed inside the stations fourth-order lens at this time, and a Tyfon air horn replaced the fog bell.

While the keepers may have kept the lighthouse neat, they were not necessarily fond of their place of residence. In an article included the Philadelphia Evening Bulletin, Francis A. Massey, office-in-charge of the Lewes Coast Guard Station, stated the boys on Elbow of Cross Ledge lost plenty of sleep on foggy nights as several vessels had struck the lighthouse with glancing blows while trying to navigate the bay in pea soup fog. The article also contained the following commentary on the keepers life at the Elbow:

It was no laughing matter that the four-man crew of the lighthouse slept in their life jackets, ready to jump into the bay should their hazardous house come tumbling down. When visibility was poor, ships often passed so near the lighthouse that the whole building throbbed and shuddered from the vibrations of the ship engines.

The crew living at the station in 1951 likely donned their life jackets as well when a powerful storm inflicted serious damage to the lighthouse. After the tempest, the Coast Guard decided to automate the lighthouse, and the four-man crew was removed. Power to the lighthouse was subsequently supplied via a submarine cable that was put in place between Fortescue, New Jersey and the lighthouse. A second cable was then run between Elbow of Cross Ledge and Miah Maull Lighthouse to permit the keepers at Miah Maull to control the beacon at the vacant lighthouse.

The frequent fears of the former keepers were finally realized on October 20, 1953. That day, the Steel Apprentice was inbound to Philadelphia from the Middle East. The giant ore ship was operating practically blind as a thick fog blanketed the bay and the vessels radar was out of commission. After passing Miah Maull Lighthouse, the Steel Apprentice set a course toward the elbow, its next turning point. The ship was traveling at a low speed watching for channel markers, when Elbow of Cross Ledge Lighthouse suddenly appeared directly in its path. There wasnt even time to brace for the impact, which toppled the upper two-thirds of the lighthouse into the bay and heavily damaged the caisson. Certainly if keepers had still been stationed at the lighthouse there would have been at least one fatality.

The previously damaged lighthouse was now partially destroyed, and Mack Construction of Cape May was paid $100,000 to complete the demolition and install a skeleton tower atop the caisson foundation. Today, the red tower, which stands on a white base, supports a solar beacon.

The only offshore brick lighthouse ever built on Delaware Bay no longer stands, but thanks in part to the wreckage of the lighthouse that provides shelter for the fish in the surrounding water, Elbow of Cross Ledge now attracts visitors who come for a morning or afternoon of fishing. One or two boats are frequently found at anchor near the lighthouse, right beneath a sign that prohibits anchoring due to the submarine cable that still feeds Miah Maull Shoal. The fishermen have caused the cable to break five times between 1995 and 2004. Its a bit ironic that boaters themselves are disabling the aids established to help them safely navigate Delaware Bay.

For a larger map of Elbow of Cross Ledge Lighthouse, click the lighthouse in the above map.

The lighthouse is best seen from the water. Cape May Whale Watcher and Delaware Bay Lighthouse Keepers & Friends both offer cruises during the summer that pass by Elbow of Cross Ledge Lighthouse.

Find the closest hotels to Elbow of Cross Ledge Lighthouse