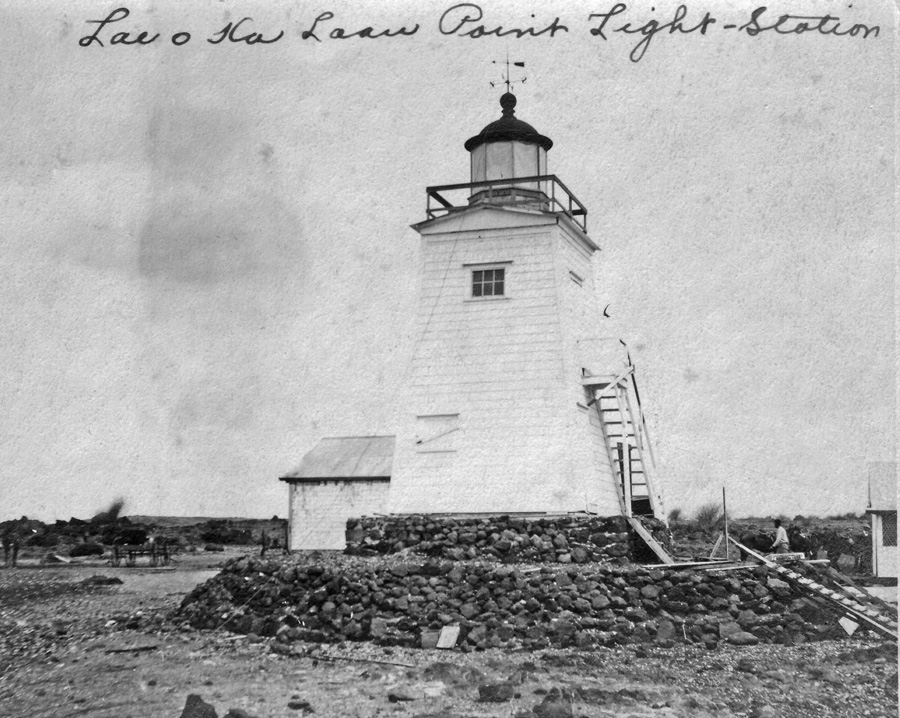 In 1878, the American ship H. V. Carleton ran aground on the western end of Molokai. This shipwreck highlighted the needed for navigational aids to help guide the increasing number of ships entering the twenty-five-mile-wide Kaiwi Channel that leads to Honolulu. Diamond Head Lighthouse marked the Oahu side of the channel but no corresponding light existed on the Moloka`i side of the channel.

In 1880, the Hawaiian Legislature appropriated $2,500 for the construction of a lighthouse on the western side of Moloka`i. Rudolph William Meyer was given the assignment to select the best site, and he chose La`au Point, also known as Kalaeokala Point, the southwesternmost tip of the island. Though the point was remote and barren, Meyer reasoned that this would be the most visible point and also a location to which building materials and supplies could be easily delivered. Writing to H. A. Carter, Minister of the Interior, Meyer enthusiastically reported:

Nature has favored the place with a little projection about 25 ft above the level of the sea and by going 65 ft from the extreme point there is ample room for a structure 25 ft high or even more if desired. This would elevate the light to about 50 ft above sea level and can be distinctly seen from a distance of nearly ten miles. I was there at low tide and could not discover any breakers further out than 400 ft in a westerly direction and 170 ft in a southerly one. Vessels can therefore come very near without danger, thus making a very high structure unnecessary.

Although the Hawaiian governments intention had been to build a stone tower, no readily available materials could be had near the site. Instead, Meyer suggested that a wooden tower be built, which in this locality being an extremely dry one, will stand for many years without repairs. Meyer also identified a good location for landing materials, supplies, and workmen for the project, about one-and-a-quarter miles north of the point.

Meyer planned to build the tower in Honolulu and then ship it to Molokai, where it could be assembled. In the interim, Meyer proposed that a temporary wooden spar, carrying a kerosene lantern, be placed on the site. Meyer also negotiated a lease for the property from its owner, a woman of Royal Hawaiian lineage named Kulikolani.

In 1881, H. Hackfeld and Company of Honolulu received a contract to build the lighthouse structure, which called for a stone tower instead a wooden one. Native workers were hired to gather stones and haul them to the site. By December, the work was completed, and a Notice to Mariners was published to advertise the new light:

KeeperBurrows experienced a life of isolation and difficulty that was revealed through his lengthy correspondence with Meyer, who remained a point of contact for the Moloka'i lighthouse operations. La`au Point was really the first of the light stations in the Hawaiian Islands to be established to serve as a landfall marker for ships entering a channel. All of the others up to that point had been harbor or anchorage lights, such as those at Honolulu or Lahaina or at Pauka`a Point and Kawaihae on the island of Hawaii. Barbers Point lighthouse, which, like La`au Point lighthouse was a landfall marker, would not be completed until 1888; and even then, would not be as isolated as La`au Point.

Throughout his tenure, Burrows faced problems in managing the light. It was sometimes difficult to get supplies, including oil for the lamps, onto the point. A reliable source of water was never found, and the station had to rely on casks of water brought to the point by lighter. Within three years, both Meyer and Burrows admitted that the original lamps worked poorly with the Fresnel lens, never allowing the apparatus to function at full capacity. Two successive lamps delivered in July, 1884 and in August, 1885, performed poorly or leaked and further replacements had to be requested.

Although Burrows salary was increased to seventy-five dollars a month in 1882  in recognition of the problems he faced  even this was rarely sent on time. At times, Burrows faced the problem of no water, having occasionally to transport it himself. The same was true of essential fuel for the lamps, which at times ran out. In July, 1891, after nearly ten years at the station, Burrows wrote the following letter to C N. Spencer, Minister of the Interior:

I have been for nine and one half years Light Keeper at this place at a salary of $75 a month without rations. Out of this sum I have to pay an Assistant $25 per month including his board. I also have to bring all the oil (with the exception of 40 cases landed here) from Kaunakakai 20 miles each way, besides all my own food etc. For this purpose I am obliged to keep a large stock of pack animals. In former years I have been able to raise a few vegetables, which helped me out a little. But of late it has been so dry nothing would grow. My water still remains unfit for use. We are getting water from Haleolono, 10 miles distant. I dont think there is [a] more out of the way, inconvenient place in the Kingdom than this. The landing is never to be depended on from one day to another. In consideration of the above disadvantages and inconveniences I humbly request Your Excellency to increase my Salary to $100 per month from July 1, 1891.

Burrows request was rejected, despite lobbying on his behalf by Meyer. Keeper Burrows later received water filters, and improvements were made in securing the necessary supplies of oil for the lamps. Burrows served as keeper, with his Hawaiian wife and several children, until his death in 1898. John R. Burrows, a young man of twenty-six and well accustomed to life at the isolated station, replaced his father as keeper.

In 1902, La`au Point lighthouse was rebuilt and repainted. Extensive repairs were made at the time as well to the keepers cottage. In 1906, a thirty-five-foot-tall, wood-frame structure, replaced the original stone lighthouse tower. Stones from the old tower were used in the foundation of the new tower.

In 1912, the station, then under the control of the U.S. Lighthouse Service, was automated, and a wood, trestle tower was built on the bluff behind the earlier station. At an elevation of 151 feet above sea level, the new automated light was visible from eleven miles at sea.

In 2022, a flashing white light was being displayed from a pole near the point at an elevation of 151 feet above the surrounding water.

For a larger map of La'au (Kalaeokalaau) Lighthouse, click the lighthouse in the above map.