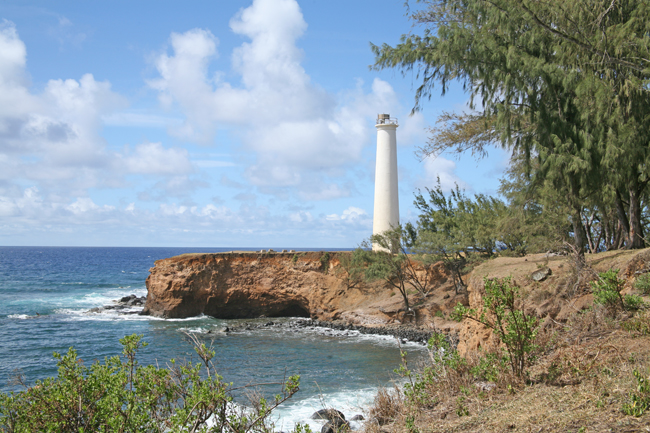 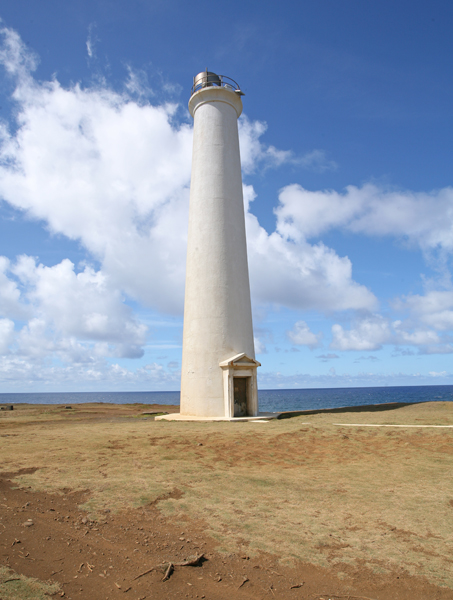 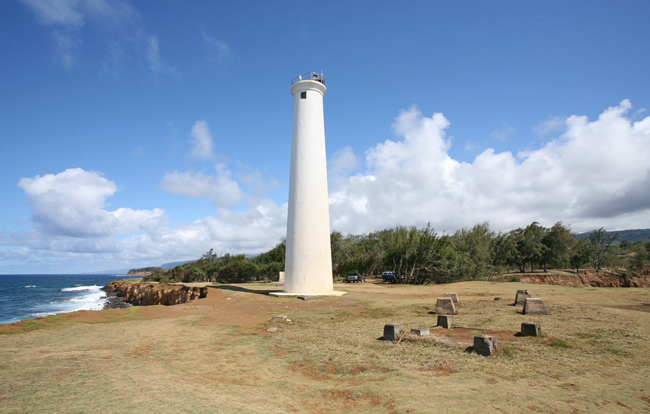 Near the northern tip of the Big Island, Kauhola Point juts out into the Pacific Ocean. Steep cliffs surround the point on either side, and reefs extend from the point for roughly two miles. After several ships wrecked off the point, the Hawaiian Government constructed a wood-frame, forty-foot tower, topped by an enclosed lamp room. A lens and reflector, fabricated by Barbier and Benard of Paris, amplified the light source and sent forth a beam from the lamp rooms bay window that could be seen for ten miles. The light was activated in 1897, one year before Hawai`i became a U.S. territory. In 1904, the Lighthouse Board took control of Hawai`is navigational aids and shortly thereafter issued a report stating that Kauhola Point Light, along with numerous other lights, was in a dilapidated condition. No keepers residence was attached to the station, and when Edward K. Moealoha, who served at the point from 1907 to 1913, was forced to spend the night at the light, his only shelter was a small service shed. After Moealohas resignation, a keepers dwelling was built roughly 475 feet south of the light to help attract a new keeper. The dwelling, completed on January 12, 1914 at a cost of $2,833, was described in the Annual Report of the Department of Commerce:

The dwelling is a one-story frame structure, with plastered interior and asbestos shingled roof and is supported upon a concrete pier foundation. It is approximately 34 by 35 feet in plan, and consists of a living-dining room, kitchen, pantry, two bedrooms, a bath, storeroom, and two closets, and is provided with a veranda off the living room, and complete plumbing.

The dwelling was built over a three-month period by a crew of thirteen men under the direction of Leslie E. Bailey, construction foreman for the lighthouse district.

At some point after 1904, a lens lantern displayed from the top of a thirty-foot mast replaced the old wooden tower on Kauhola Point. This mast light served until a replacement pyramidal, frame tower, capped by a metal lantern room housing a revolving fourth-order Fresnel lens, was built on the point in 1917. The Lighthouse Service had been trying to secure funds for a new tower on the point since at least 1911, and though this new tower was described as a temporary, it was a stout structure. Illuminated by an incandescent oil vapor lamp, the lens produced a white flash every six seconds that could be seen for up to fourteen miles. The new light had a focal plane of sixty-six feet, but the same year it was established, the Lighthouse Service requested funds to erect a concrete tower at this important landfall station that would raise the light to a height of 110 feet above the surrounding water.

John M. Sweeney was in charge of Kauhola Point Lighthouse from 1923 to 1941, and his eighteen-year tenure was longer than any other keeper at the station. Keeper Sweeneys diligent service during 1925 resulted in his receiving the efficiency flag, an award given to the keeper whose station was considered the best kept during the year. During the fall of 1929, the Big Island experienced a seismic crisis, during which two of the strongest earthquakes to shake the island occurred  a magnitude-6.1 earthquake on September 25 followed by a magnitude-6.5 earthquake on October 5. One resident not far from Kauhola Point Lighthouse counted 444 earthquakes during a three-day period. This swarm of earthquakes broke the mantle used in the incandescent oil vapor lamp at Kauhola Point on several occasions.

Though Kauhola Point was somewhat isolated, it became less so through the generous gift of a radio receiving set by A. Atwater Kent, a Philadelphia radio manufacturer who supplied sets to several lighthouse keepers. Keeper Sweeney wrote to the Commissioner of Lighthouses in 1928, relating that thanks to the radio, he and his family could hear radio station broadcasts from New York as clear as a bell.

At 9:45 p.m. on September 25, 1931, a fire, apparently caused by a faulty thermostat, erupted in the lantern room. The intense heat broke all the glass in the lantern room and cracked the top prisms of the lens. Keeper Sweeney managed to quickly extinguish the fire before the tower or clockwork mechanism was damaged, and he quickly set up an emergency lamp, which functioned for the remainder of the night.

After fourteen years of repeated requests for a major light at Kauhola Point, funds were finally allocated in 1933 for the new tower. The plans, which were nearly identical to those used for Nawiliwili Lighthouse built on Kaua`i the previous year, called for an eighty-six-foot, conical structure to be built of reinforced concrete. A 105-step spiral staircase led to the top of the tower, where a trap door had to be slid back to access the beacon. The welded, metal superstructure atop the tower housed two thirty-six-inch airway beacons, one of which was active while the other served as backup. The revolving beacon produced alternating red and green flashes every six seconds. Although this Christmas-like signature was in use elsewhere in the Pacific, it was a first for Hawai`i and was very favorably received and commented on by mariners. The station was supplied with commercial electricity, but generators were housed in the base of the tower in case of a power outage. Alarms would inform the keepers if a generator stopped or if one light failed and the other had to be engaged. The new lighthouse cost $17,495 and was left unpainted for a year to allow the concrete to cure before it was given its white daymark.

Mildred Lehuanui (Lehua) McColgan, one of three daughters of Keeper John Sweeney, has fond memories of the years her family spent at Kauhola Point. With no boys in the family and no assistant keeper assigned to the station, Lehua was given significant responsibilities at the lighthouse. She recalls helping with such duties as cleaning the spark plugs of the three generators in the lighthouse, entering weather conditions, earthquakes and the names of passing ships in the stations logbook, painting wooden structures, and polishing the brass work every Saturday morning. Other tasks included mowing the yard, planting flowers and vegetables, and keeping the area around the lighthouse cleared all the way down to the coastline. The family never knew when an officer would arrive to inspect the station, so everything was always kept in order.

Prior to being assigned to Kauhola Point, Keeper Sweeney served at Makapuu Lighthouse. Each year the family took a short vacation during the summer, while a temporary keeper cared for the station. A frequent destination was South Point Lighthouse, where they would spend a few days and then visit other parts of the island where Keeper Sweeney could find rest and peace. If money were available, a trip to Honolulu was included in the vacation.

After his service at Kauhola Point, Keeper Sweeney was transferred in mid-1941 to Barbers Point, where he was serving when the blackout was imposed on all Hawaiian lights following the bombing of Pearl Harbor. Keeper Sweeneys final assignment before retirement was at Diamond Head Lighthouse. Sidney Estrella served as the final keeper at Kauhola Point, leaving the station upon automation in 1951.

All that remained at the station during my visit in 2007 was the headless concrete tower, whose windows had been cemented over, and the ruins of some of the outbuildings. The cement piers just west of the lighthouse served as the foundation for the 1917 tower.

When originally built, the 1933 lighthouse stood eighty-five feet from the nearest cliff edge, but by 2009, this distance was reduced to just twenty feet. Between 2003 and 2007, the cliff face retreated fifteen feet with six feet being sheared off by an October 2006 earthquake. An engineering report completed in 2007 estimated that the tower would likely collapse within two to five years due to shoreline erosion. Relocating the tower was considered, but after consulting with state historic preservation officials, the Coast Guard decided to demolish the tower and replace it with a monopole light located farther back from the cliff edge. The replacement light was in place by November 2009, and demolition of the 1933 tower, which took three days, started on December 11 of that year.

For a larger map of Kauhola Point Lighthouse, click the lighthouse in the above map.

From the intersection of Highway 250 and 270 in Hawi, near the northernmost point on the big island, proceed east on Highway 270 (Akoni Pule Highway). After roughly two miles, you need to turn left. You will see ATV Outfitters at this intersection, and the road to your right is Maulili Road. As you drive towards the ocean the road will become progressively worse, and there is a gate that may be locked. You will need a vehicle with high clearance to reach the Kauhola Point Lighthouse when the gate is open, or you can park and walk the last mile or so.

ATV Outfitters offers tours that provide a distant view of the lighthouse.


Locating this light was an adventure. Before arriving at the eastern end of Highway 270, we knew we had gone too far, but we wanted to see the Pololu Valley anyway. The lighthouse is actually closer to Kapaau, where you will see a statue of Kamehameha the Great, who was born nearby. This statue is identical to the famous statue on the grounds of the Iolani Palace in Honolulu. The statue in Kapauu was cast in Florence in 1830, but was lost when the ship carrying it went down off the Falkland Islands. A second statue was cast from the original mold and delivered to Honolulu in 1833. The sunken statue was later recovered and brought here to Kamehameha's childhood home.


I would HIGHLY recommend the 4 wheel drive scenario if at all possible. It is a terrible road even with a SUV -- there are pockets where it looks like the land separated from an earthquake, but it is possible with careful driving. If you choose to walk, plan for lots of time and just when I thought we would never find this, we hit success. Walking back away from the light up the coastline a little bit adds to a picturesque view of it. It is a beautiful location and not to be missed.