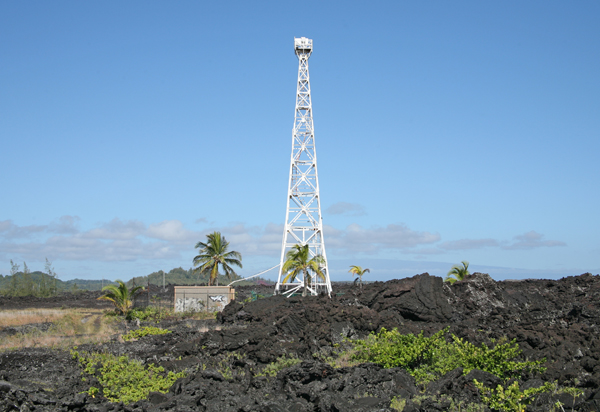 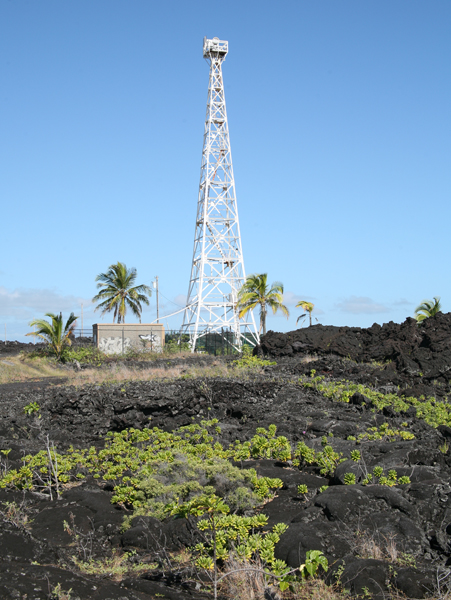 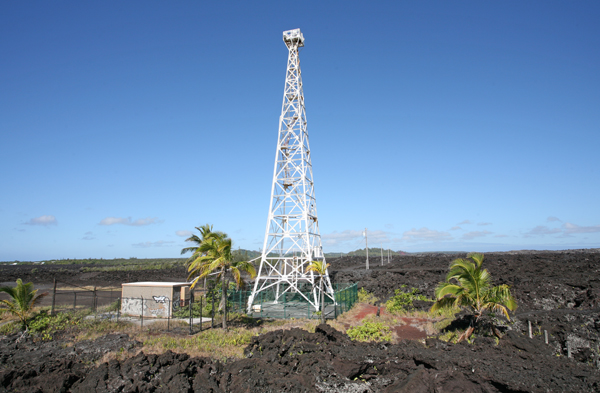 Located on the Big Island, twenty-five miles southeast of Hilo, is Cape Kumukahi, the easternmost point of the Hawaiian Islands. According to Hawaiian mythology, the cape is named after Chief Kumukahi who refused to allow the fire goddess Pele to participate in the playing of royal games. Offended, Pele sent forth a fountain of fire and lava that chased Kumukahi to the beach and continued eastward creating the cape. When the Lighthouse Board assumed control of Hawaiis lighthouses in 1904, it began work on a plan to erect major lights to better mark approaches to the islands. Funds for Makapuu Lighthouse were secured in 1906, money for Molokai lighthouse was obtained in 1907, and Congress made an appropriation for Kilauea Point Lighthouse in 1908. The next major light desired by Captain Tullett and the islands Association of Maters and Pilots was at Cape Kumukahi, and a Congressional Committee had promised Captain Tullet, that it would vote one first order light each year for Hawaii till the points needing such lights were supplied with them. The Lighthouse Board made its first request for a lighthouse at Cape Kumukahi in 1907, backed by the following justification:

There is at present no landfall light for vessels bound to Hawai`i by way of Cape Horn. Several vessels have within recent years gone ashore on Kumukahi Point. This is the first land sighted by vessels from the southward and eastward. The shipping from these directions now merits consideration, and with the improvement of business at Hilo, the necessity for a landfall light on this cape grows more urgent. It is estimated that a light at this point can be established for not exceeding $75,000, and the Board recommends that an appropriation of this amount be made therefor.

The Lighthouse Board repeated its request in 1908, but in 1909, it decided that further study and investigation of conditions should be made before the character and cost of a station could be determined. The sum of $1,500 was thus requested to fund a survey to judge the feasibility and need of a light and fog-signal station. Cape Kumukahi was found to be barren, undulating lava rock, and in order to supply a station there, nearly two miles of road would have to be constructed over the rock, as landing at the cape was impossible at most times. The scope of the proposed station was changed, and just $25,000 was requested for an acetylene light for the cape.

In 1927, after annual petitions had gone unfunded for several years, V.S.K. Houston, the Hawaiian Territorys delegate to Congress, stressed the importance of a light on Cape Kumukahi to aid not only the increase in shipping traffic since the opening of the Panama Canal in 1914, but also planes on transpacific flights. At this time, Hilo was the second largest port in the Hawaiian Territory.

Finally, on December 31, 1928, the U.S. Government purchased fifty-eight acres on Cape Kumukahi from the Hawaiian Trust Company for the sum of $500. During the following year, a thirty-two-foot wooden tower capped with an automatic acetylene gas light was built at the cape for local use  not exactly the powerful landfall light the Lighthouse Board had envisioned years before.

Four years later, sufficient appropriations were at last made for a primary seacoast light for Cape Kumukahi. An asphalt macadam road was built in 1932 at a cost of $10,797 to link the station to the nearest highway, and the following year, two five-room dwellings, water tanks, sidewalks, and a reinforced concrete foundation for the tower were completed. Due to the frequent earthquakes associated with volcanic activity in the area, a unique foundation was designed for the tower. Lava was first excavated and a massive concrete block was installed in the resulting hole. A second concrete block was placed above the first with a thick layer of sand in between. This design allowed the lower block to move with the earth, without transmitting shocks to the tower. The following year, a square, pyramidal, skeleton tower was constructed of galvanized steel, and two, thirty-six-inch airway beacons were placed at its top, roughly 125 feet above the ground. To supply power for the light and keepers dwellings, three engine-generators units were installed in a corrugated powerhouse located at the base of the tower.

With a strength of 1,700,000 candlepower, Cape Kumukahi Light was the strongest in the Hawaiian Islands, and only the concrete Molokai Lighthouse was taller. Just one of the two airway beacons was in operation at any time, with the other unit being reserved as a backup. The signature of the new light was a white flash every six seconds.

Veteran keeper Charles K. Akana, who had served at nearly every major light in the islands, was brought in to take charge of the new station, and William J. Watkins served as the first assistant keeper. Due to the bareness of the landscape, the keepers dwellings were located about three-fifths of a mile from the tower.

In 1938, Joe Pestrella was transferred from the lighthouse tender Kukui to the barren station at Cape Kumukahi. On his own time and at his own expense, Pestrella brought in soil and trees and succeeded in turning a desolate spot into a place of beauty. Included in his orchard were lemon, mango and tangerine trees, and a rare bay leaf tree.

Cape Kumukahi is included in Kilauea Volcanos active east rift zone. In 1955, a lava flow threatened the station, but Pestrella remained on duty at the peril of his life to keep the light running. For his dedicated years of service at the station, he was selected as Civil Servant of the Year for the Hawai`i area in 1956.

On January 13, 1960, a fiery fountain of lava, roughly half a mile long, shot up in a sugar cane field, two miles east of the lighthouse and just north of the town of Kapoho. Bulldozers and fire hoses were used in attempts to divert and harden the flow. On January 21, the flow appeared to be heading north away from the village and the station, however, during the next week, the lava turned south and started to encroach on the station grounds. Pestrellas wife and infant son were evacuated, but Pestrella remained at the station saying, When my backside feels hot, Ill move on. Not till then!!.

When the lava set the stations gate ablaze, Pestrella surely felt the heat, and on January 28, he wisely decided to place the light on emergency power and leave the station. The lava flow swallowed the keepers dwellings and incinerated Pestrellas orchard. That same day, the flow engulfed the town of Kapoho.

On February 2, the heat from the flow caused the generators fuel tanks at the tower to explode, and the light was extinguished. As the river of lava approached within a few feet of the tower, it remarkably divided into two streams that flowed past each side of the structure, leaving the tower unscathed. The Kapoho eruption had covered over ten square kilometers and added two square kilometers of land to the island.

A ten-ton lighted buoy, anchored 510 yards off the cape, served temporarily as the Cape Kumukahi navigational aid until Hilo Electric Company was able to string power lines to the light from the Kapoho Beach lots. After surviving the lava flow, the lighthouse was fully automated, and Pestrella was transferred to Makapu`u Lighthouse on O`ahu.

Mahalo to Liane Pestrella, granddaughter of Keeper Joe Pestrella, for providing historic photographs and documents for this page.

For a larger map of Cape Kumukahi Lighthouse, click the lighthouse in the above map.

From Hilo, take Highway 11 south to Highway 130. Follow Highway 130 for just under twelve miles then turn left onto Kapoho Road (Highway 132). After 2.7 miles on Kapoho Road you will pass Lava Tree State Park on your left. The road takes a sharp turn to the left just after this interesting park, and the Cape Kumukahi Lighthouse is 6.8 miles farther down the road. Before reaching the lighthouse, the road becomes dirt and is quite rough. The road leading to the lighthouse was affected by the erruption of Kilauea volcano in 2018 so access to the lighthouse may not be possible.


When visiting Cape Kumukahi Lighthouse, a stop at nearby Lava Tree State Park is definitely worthwhile. When lava quickly flowed through the area in 1790, it congealed around the moisture-laden trunks of the trees. Today, hollow molds of the tree trunks, some rising over ten feet, can be seen in the park. Another interesting side trip is to Hawai`i Volcanoes National Park, where you can see the Kilauea Caldera, and drive down to the coast, where an active lava flow meets the ocean.

Adjacent to Cape Kumukahi is a monitoring station for ALOHA - Alliance for Long-term Observations of the Hawaiian Atmosphere. A sign at the station reads: "This site at Cape Kumukahi has some of the cleanest air in the northern hemisphere under typical trade wind conditions. This air from over the Central Pacific contains trace amounts of gases and particles that originated from pollution on the continents. By monitoring the variability in these amounts, we can estimate the influence of human activity upon global pollution and the air quality of the Hawaiian Islands. Similar measurements in the upper atmosphere at the top of Mauna Loa provide one of the world's most important data sets on CO2 and the link to human activity, fossil fuel combustion and global warming. This site at Kumukahi will provide similar data for the atmosphere near the ocean surface."