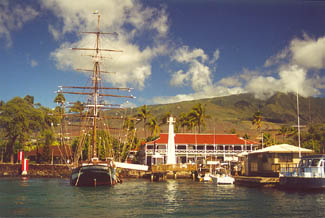 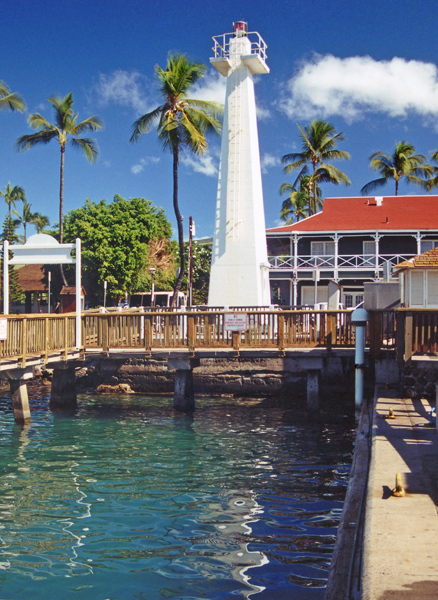 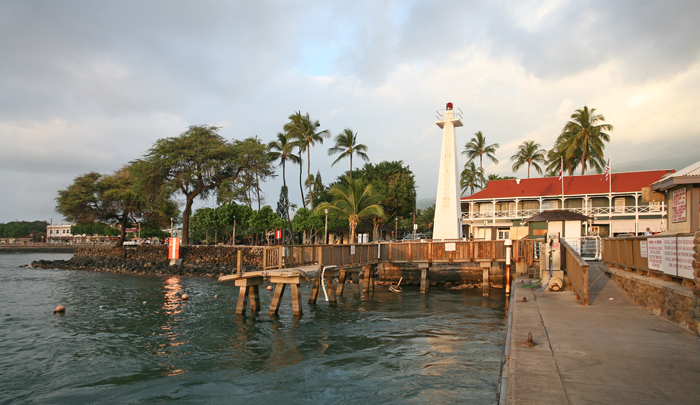 Between 1820 and 1860, Hawai`i was popular with whalers as a stopover point for refitting and reprovisioning, and the high cost of supplies and port charges at Honolulu made Lahaina the port of choice for whale ships. To aid the ships in reaching the port, the first lighthouse in Hawai`i was constructed at Lahaina in 1840. The light was built on a section of waterfront known as Keawaiki that means literally the small passage, referring to a narrow break through the coral reef that led to protected anchorage.

The only existing record of the original lighthouse is a letter written from John Kapena of Lahaina to Paulo Kanoa in Honolulu. In the letter, Kapena describes the original light as a tall looking box-like structure, about nine feet high and one foot wide, so was all sides; built on a suitable position facing the landing. It was positioned so the landing was marked for those vessels, boats, and canoes that may come in port at night; because there were quite a number of boats wrecked by the waves. The lighthouse was first lit on November 4, 1840, and the keeper was paid a salary of $20 per year. The whaling ships using the port were charged $1 for the lighthouse, $10 for anchorage and pilotage, and $3 for water.

In 1866, a third lighthouse was put into operation at Lahaina. Little information exists regarding the second light to serve the port, but some rough details concerning it are given in the following excerpt from the Hawaiian Gazette announcing the establishment of the third light.

The old Light House at this port has been pulled down, and a new one erected on the old site, somewhat enlarged. The old house was 19 feet by 25 feet, the new one is 25 feet by 30 feet, and a light tower built on top, containing a light room and a sleeping room for the light-keeper. The lamps are altered to burn kerosene oil, instead of whale oil.

The storehouse below the light tower was leased to the owners of a sugar plantation at a rate of $96 per year.

Lahaina served as the capital of the Kingdom of Hawai`i from 1820 until 1845, when the capital was moved to Honolulu. A group of armed businessmen overthrew the Hawaiian monarchy in 1893 and established a provincial government. The U.S. government officially annexed Hawai`i on July 7, 1898, but it would not be until 1904 that the government took control of the aids to navigation in the islands.

Captain David Taylor, who served as harbormaster at Lahaina, was given the added responsibility of caring for the light in 1893, after the previous keeper refused to take an oath to support the provincial government. A decade later, George H. Dunn, an agent for the Inter-Island Steam Navigation Company and Wilders Steamship Company, replaced Captain Taylor and served as keeper until 1907, when Samuel Ako was placed in charge of the light.

Upon assuming control of Lahaina Light in 1904, the Lighthouse Board wrote:

This is a fixed white light composed of two ordinary kitchen lamps of small power, with red and green sectors, estimated to be 20 feet above high water. The lights are shown from a white wooden pyramidal tower built on the top of a wooden storehouse. It is difficult to distinguish this light from the lights in the town.

Due to the deficiency of the existing light, a replacement lighthouse was constructed in 1905. Lieutenant John R. Slattery, who graduated fifth in the West Point class of 1900, was sent to Hawai`i in 1904 to oversee the improvement of harbors and aids to navigation. Slattery visited Lahaina in April 1905 and made preparations for the construction of a new lighthouse to serve the wharf where over 500 steamers were calling each year.

The new wooden, pyramidal, skeleton tower was fifty-five feet tall, thirty feet taller than its predecessor, and had an enclosed workroom near the top, just below the lens platform. The lens lantern that replaced the two ordinary reflector lamps had red and white sectors. As long as a mariner remained in the white sector, a safe approach to the port could be made. The Maui News gave the following description of the light, which was placed in operation on May 13, 1905: The superintendent and workmen employed by Lieutenant Slattery have displayed no little skill and energy in the construction of the lighthouse on Lahaina wharf. The structure rises to a height of sixty feet and three inches above high water mark. A splendid lens for the lantern was imported from Paris.

In 1917, the wooden trestle tower was replaced by the current thirty-nine foot, pyramidal, concrete tower at a cost of $1,549, which included improvements to the seawall. A metal ladder leads up one side of the tower to the platform from which a fixed red light is shown. The durability and ease of maintaining such concrete towers led to their wide deployment throughout the islands. A metal plaque placed at the tower in 1984 by the Lahaina Restoration Foundation, the caretakers for the lighthouse, gives a brief history of the towers built at the site, which was originally home to the oldest Pacific lighthouse:

On this site in 1840, King Kamehameha III ordered a nine-foot wooden tower built as an aid to navigation for the whaling ships anchored off Lāhainā. It was equipped with whale-oil lamps kept burning at night by a Hawaiian caretaker who was paid $20 per year.

The tower was increased to 26 feet in 1866, rebuilt in 1905, and the present concrete structure was dedicated by the Coast Guard in 1916. Thus, this light was the first in the Hawaiian Islands and pre-dates any lighthouse on the US Pacific Coast.

In February 1917, Keeper Ako filed suit against the Pioneer Hotel Company for the sum of $10,000. The Pioneer Hotel was built near the wharf at Lahaina in 1901, and Keeper Ako was apparently residing there, as he claimed that the hotel company removed the furniture from the room he and his family were occupying in the Lahaina Hotel, compelling the occupants to sleep on the floor for four days and nights. Perhaps this case prompted Ako to change professions, for the 1930 census for Lahaina lists him as a lawyer.

In 2009, Coast Guard Senior Chief Petty Officer David Garrett and his crew from the Coast Guard Aids to Navigation Team in Honolulu converted Lahaina Lighthouse to solar power, ending years of reliance on Maui Electric Co. This move, made possible by new developments in light-emitting diode (LED) technology, will eliminate power bills and allow the beacon to stay lit during power outages.

For a larger map of Lahaina Lighthouse, click the lighthouse in the above map.

From Kahului, take Highway 380 to Highway 30. Follow Highway 30 around the western lobe of Maui to Lahaina. In Lahaina, turn left onto Prison Street and then right onto Front Street. Lahaina Lighthouse is at the western end of the harbor to your left, behind the Pioneer Inn.

The lighthouse is owned by the Coast Guard and maintained by the Lahaina Restoration Foundation. Grounds open, tower closed.


The port at Lahaina is still busy, but nowadays the whale ships found there pursue the humpback whales not for their blubber, but for the enjoyment of the tourists aboard. The waters off Maui are used as the calving and breeding grounds by humpback whales from mid-December to mid-April.