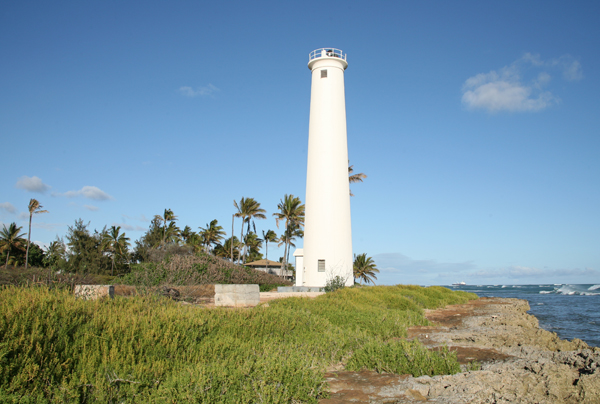 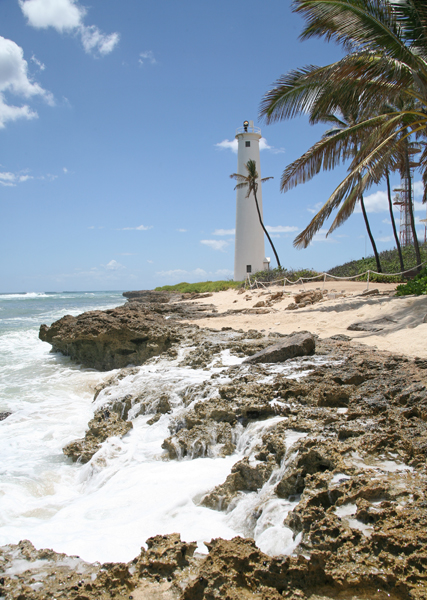 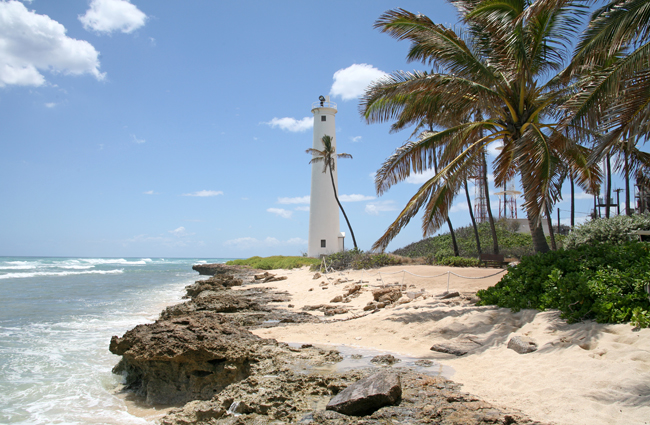 Having a landmark or prominence named after you is typically considered an honor, however, in the case of Barbers Point, it is doubtful that such was the case. On October 31, 1796, the brig Arthur, captained by Henry Barber, was sailing west from Honolulu to Canton with a load of sea otter pelts aboard, when, shortly after leaving Honolulu, it struck a coral reef that extends from the southwest tip of the island of Oahu. Six of the crew of twenty-two along with the ship were lost in the wreck. Since the grounding, the point has been associated with Captain Baber of the ill-fated vessel. In 1968, the U.S. Board of Geographic Names dropped the apostrophe, changing the name from Barber's Point to Barbers Point. Another wreck occurred at the point in 1855 when the French whaleship Marquis de Turenne grounded on the reef after taking on supplies at Honolulu. Remains of this wreck could still be seen when William Alexander, surveyor general of the Hawaiian Government Survey Bureau, made the following report in 1880.

I examined the coast for some miles in the neighborhood of Barbers Point, selected a site for a light house and marked the spot by a pile of stones and a staff with a red and white flag. I also fixed the position by triangulation and corrected our chart of that locality. It is the SW point of Oahu, known as Lae loa where there are several pieces of  the French whaleship Marquis de Turenne, which was wrecked about a mile off the point in 1855. A shoal with only 6 to 10 feet of water on it is said to extend 2 to 3 miles south by west from the point, and it should be sounded. In fact it is a question whether the light house might not be placed on a shallow spot or okohola whales back, as the natives call it, a mile or more offshore.

A sum of $2,500 was appropriated in 1880 for the construction of a light at the point, and soon thereafter the French company of L. Sautter-Lemonnier was contracted to supply a fourth-order Fresnel lens along with the lamps and lantern room for the proposed tower. By the time the lighthouse hardware arrived from France, the lighthouse funds were depleted, and the shipment was placed in storage.

Six years passed before $3,000 was provided to construct the tower on land donated by James Campbell. Peter High submitted the lowest of the six bids received for the project in early February 1888, and he was awarded a contract to construct a stone lighthouse for $1,892 and a keepers dwelling for $309. During the first part of 1888, a forty-two-foot tower was constructed of coral stone laid in a cement mortar, and a frame dwelling was built. Upon completion, the tower was painted white and topped with the red lantern room. The light was exhibited for the first time on March 29, 1888, and William Hatton Aalona was hired as its keeper at an annual salary of $240.

Early in the morning of August 31, 1906, the army transport ship Sheridan ran aground on Barbers Point. Keeper Hatton Aalona was relieved when the transport officers admitted his light was burning. That light never go out one time since I became keeper here nearly twenty years ago, Aalona said. I feel very sorry about the transport, but the light was there all right. When Keeper Aalona saw the transport run aground, he awakened the wireless telegraph boy, who was able to pass the news along to Honolulu.

After having been in charge of the light for nearly twenty years, Keeper Aalona, who was considered to be in good health though he was in his seventies, died in his sleep on February 14, 1907. Local papers publicized the death of Keeper Aalona and noted that he had served as a whaler and captain of inter-island vessels before becoming a lighthouse keeper and that he had become a Mormon convert when George Q. Cannon visited the Hawaiian Islands in the early 1850s.

To make its light more readily distinguishable from the steady plantation lights in the vicinity, the lighthouse was remodeled in 1912 to accommodate a fourth-order, double-flash lens illuminated by an incandescent oil vapor lamp. The new lens revolved once every five seconds to produce two 0.1-second flashes separated by 1.1 seconds and followed by a 3.7-second eclipse. This series of photographs shows the lighthouse in 1912 before, during, and after the major alteration. Note that prior to the remodeling an external set of metal steps led to the top of the lighthouse.

An assistant keeper was assigned to Barbers Point to help with the extra work required by the new illuminating apparatus, and a two-room structure was built to provide temporary housing. A proper second dwelling, built atop concrete piers and equipped with indoor plumbing, was added to the station in 1915 at a cost of $3,199.

Manuel Ferreira was a noted keeper of Barbers Point Lighthouse. In 1919, he helped rescue seven Japanese fisherman whose sixty-foot sampan was crippled on the reef off the point. After helping the men ashore, Ferreira welcomed them to his home where they were fed and given dry clothing. In 1923, the four-masted schooner Bianca was caught in a storm off Barbers Point. With its sails shredded, the paralyzed vessel was slowly dragging its anchors toward the razor-sharp rocks of the reef. Seeing the vessels distress signals and recognizing the grave danger the vessel was in, Ferreira ran over three miles through a jungle of storm-torn algaroba trees to the closest telephone and summoned naval authorities. As a result, a Navy tug was promptly dispatched and towed the Bianaca safely to harbor.

Manuel wasnt the only Ferreira noted for service at Barbers Point for when Manuel and his assistant keeper were stricken with influenza, Caroline Ferreira had to take on their responsibilities. While the men were recuperating in the hospital, she took care of her six-year-old son and her normal domestic responsibilities, and each night minded the temperamental kerosene-vapor lamp in the lantern room. In addition, every three hours she had to wind the clockwork mechanism that powered the revolving lens.

By 1930, the tower was showing signs of deterioration and plans were made to replace the structure. An appropriation of $20,000 was secured in 1933 for erecting a seventy-two-foot, reinforced-concrete, cylindrical tower next to the original one. At the same time, generators were installed at the station to supply electricity to both the lighthouse and the keepers dwellings. The lens was transferred from the old tower to the new one, where it was first lit on December 29, 1933 500-watt bulb. With a crowd of interested spectators looking on, cuts were made in the coral stone on one side of the old tower, causing it to topple over.

Samuel A. Amalu was in charge of the station when the new tower was built, and for his service during the following year, 1934, he was awarded the commissioners efficiency flag. A Lighthouse Service Bulletin in 1935 explained how Keeper Amalu was especially deserving of the honor:

Mr. Amalu deserves special commendation in receiving this award because of the fact that during this period his wife was critically ill, being confined to her bed by an incurable illness which culminated in her death in the latter part of the year. Also Barbers Point Light Station was made a one-keeper station on January 18, 1934, and the station is located on a large reservation. The efficient rendering of his duties under all these conditions by keeper Amalu is worthy of the highest praise.

At 8:00 a.m. many planes were seen overhead, both Japanese and ours. Dog fighting continued for twenty minutes, bullets hitting the ground in bursts. Then all planes headed south, our planes chasing them. Seemed to have come from the windward side, and left the Island on Barbers Point side.

Two parachutists were dropped close to the station; they were confused in the kiawi trees and prowled around the station all Sunday night, the Fort Kam. 55th C.A. boys firing at them with rifles and machine guns. One was wounded, and was later found on the beach, buried by his mate. His feet were sticking out of the sand. The other was later shot by an officer.

When we got the word that the two Japs were located, we felt easy, and Tuesday night was the first night anybody slept.

On April 15, 1964, a thirty-six-inch airway beacon replaced the stations Fresnel lens, and Fred Robins, the last keeper, left the automated lighthouse later that year on December 7. Keeper Robins had three stints of service at the lighthouse. Following in his fathers and grandfathers footsteps, Robins became a lighthouse keeper, and at the age of sixteen was assigned to serve at Barbers Point. After enduring two years of isolation at the lighthouse, the young Robins quit to join the Merchant Marines. However, in 1930 he rejoined the Lighthouse Service and was again assigned to Barbers Point. After three years at Barbers Point, Robins went on to serve at lighthouses on Kaua`I and Moloka`I, before returning to Barbers Point in 1953 for eleven more years of service.

In 1958, Fred Robins adult daughter came to the live at the lighthouse with her husband and three children. As the nearest neighbors were miles away, the Halloween tradition of trick or treating was modified at the lighthouse. The children, dressed in their ghoulish costumes, would climb the spiral staircase in the light tower where a ghost would provide them treats in the lantern room. Next, they would venture down the stairs and knock at the back door of the keepers dwelling where a witch would supply them with additional candy. Finally, the children raced around to the front door of the dwelling where they were invited in for cookies and milk.

The lantern room was likely removed from the Barbers Point Lighthouse when it was automated. In 1985, the airway beacon was replaced by a Double Barreled Rotating Optic Directional Code Beacon (DCB-224), which increased the range of the light to twenty-four nautical miles.

For a larger map of Barbers Point Lighthouse, click the lighthouse in the above map.

From Honolulu, take H1 west to Exit 1 (Campbell Industrial Park). Take Exit 1, loop back over the freeway, and proceed south on Kalaeola Boulevard until it ends at Olai Street. Turn right on Olai Street and follow it to Barbers Point Beach and Barbers Point Lighthouse.


One of Oahu's main luaus, Germaine's Luau, is located right by the lighthouse. The Lonely Planet guide to Hawai`I calls it an "impersonal affair" with "a buffet dinner, drinks, a Polynesian show and related hoopla," but coupled with a visit to the lighthouse and a sunset over the ocean, it could be an enjoyable experience.


This lighthouse's beach surroundings has the "wild abandoned" feel that makes you feel like you have really left it all behind you.