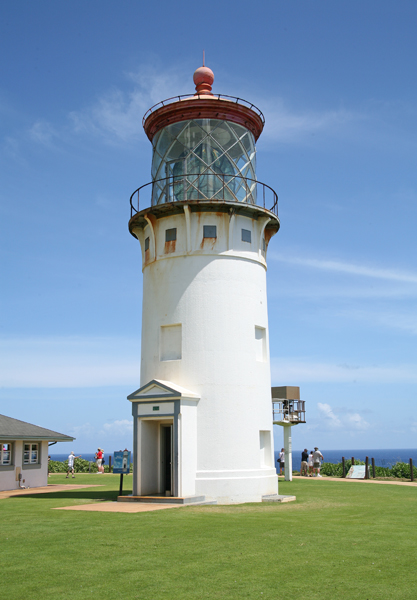 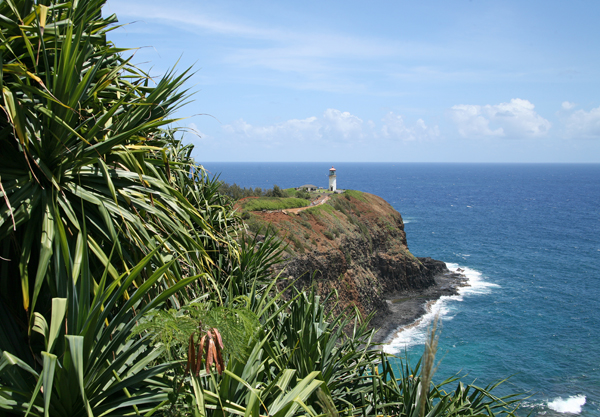 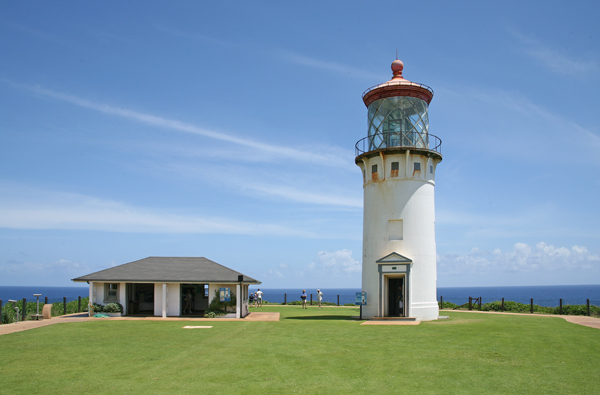 Kaua`i, the Garden Island, has six minor navigational lights and two primary seacoast lights, Kilauea Point Light and Nawiliwili Light, adorning its shoreline. In 1907, the Lighthouse Board asserted that a first-order light at Kilauea Point, the northernmost point of the inhabited Hawaiian Islands, was needed to serve as a landfall light for ship traffic from the Orient. Congress provided the requested $75,000 for its construction on May 14, 1908, and the following year, Kilauea Point, a narrow, lava peninsula protruding from the northern shore of Kaua`i, was purchased from the Kilauea Sugar Plantation Company for the consideration of one dollar. A method for delivering supplies to the remote point had to be developed before construction could begin. Due to the lack of good roads in the area, the decision was made to bring the materials in by sea. The lighthouse tender Kukui would anchor offshore and then dispatch small boats laden with supplies to the cove on the west side of the point. Since there was no beach, the boats would anchor to cleats cemented into the lava rocks at the point. Materials were initially winched up a chute until a boom derrick was constructed on a ledge ninety feet above the water to pluck the supplies from the boats and place them on a loading platform 110 feet above the water.

Work on the fifty-two-foot tower began in August 1912. As excavation got underway at the site, it was soon apparent that the rock was not solid as had been indicated in the original survey. This forced the workers to dig down eleven feet to find solid volcanic rock and led to the tower having a unique feature: a basement.

A rock-crushing plant was set up near the site to produce aggregate for the concrete, but when the local rock was found unsuitable, the plant was abandoned, and rock was purchased from a quarry five miles away.

The Champion Iron Company of Kenton, Ohio produced the ironwork for the towers lantern room and spiral staircase, while the Parisian firm of Barbier, Benard, and Turenne manufactured the second-order, bivalve, Fresnel lens and clockworks at a cost of $12,000. When the lens arrived, it was discovered that the assembly instructions were in French, and an urgent message was sent to Honolulu, requesting help with translation. Fred Edgecomb was dispatched on an interisland ship from Honolulu to Nawiliwili Harbor and then rode twenty miles on horseback to the site. After he had helped translate the instructions, the four-and-a-half-ton lens was assembled in the tower and then floated on a bed of mercury contained in a nine-inch-deep circular trough with an inside diameter of roughly six feet. The revolving lens, which was first illuminated on May 1, 1913, produced a double flash every ten seconds that was visible up to a distance of twenty-one nautical miles.

As part of a day-long celebration that preceded the first lighting, the entire population of Kilauea town was invited for a luau, featuring Kalua pig baked in the ground, sweet potatoes, and poi. Also included in the festivities was a shark shoot. The station derrick was used to lower a cow carcass into the waters at the landing cove, where sharks attracted to the bait could be easily shot.

The May 6, 1913 edition of The Garden Island, Kaua`is newspaper, reported on the lighting ceremony.

From a projecting point of land near Kilauea, and 180 feet above sea level, the Kilauea Point Lighthouse, like the Cyclops of old, which swept the sea with their one fierce eye, burst forth its shining eye of warning to the mariner last Thursday evening while hundreds of country people who had gathered to witness the wonderful sight made the shores and hills ring with astonished delight. Superintendent [Frank C.] Palmer, under whose able direction this excellent piece of construction has come into existence, accompanied by Manager J.R. Myers of Kilauea Plantation and other leading citizens, touched the button which set in motion the 250,000 candlepower lamp which responded as if by magic.

Three keepers dwellings were built several hundred yards south of the tower and oil house that were located near the points extremity. The homes were constructed of blue volcanic rock found on site, and each had a living room, two bedrooms, a bathroom, a kitchen, storeroom, pantry, and a laundry. Reinforced-concrete cisterns were also supplied to collect rainwater from the roofs of the dwellings. The station was ninety-eight percent complete when the original appropriation ran out on June 30, 1914. Another $3,000 was allocated on August 1, 1914 to complete the station, and minor improvements to the grounds and dwellings were wrapped up on February 2, 1915. The total cost of the station was $77,982.

Samuel Apollo Amalu came to the station in 1915 replacing the first head keeper, Harry W. Flint. Amalu, who had joined the Lighthouse Service in 1906 and had previously served at Kawaihae, Barbers Point, and Honolulu Harbor, was known for his swimming ability, and would frequently brave rough water, strong currents, and deadly sharks, to reach Moku`ae`ae Rock, a fair distance offshore from the point. The Lighthouse Service awarded an efficiency flag each year to the best-kept station in each of its districts, and Keeper Amalu was able to fly this banner at Kilauea Point in 1920, 1921, and 1923. After being in charge of the station for ten years, Keeper Amalu was transferred to Makapu`u Lighthouse on Oahu in 1924.

Although the lighthouse certainly aided many a mariner, it is most known for assisting Lieutenants Maitland and Hegenberger, pilot and navigator of The Bird of Paradise, an Army transport plane. Just a month after Lindbergs legendary transatlantic flight, these two lieutenants set off from Oakland on June 28, 1927 on what was to be the Armys first transpacific flight from the west coast to Wheeler Field on Oahu.

A new radiobeacon had been established on Maui and was to guide the plane during the flight, however, 200 miles out of Oakland the planes radio failed, forcing Hegenberger to rely on celestial navigation and dead reckoning. After twenty-six hours of flight, the crew was extremely fatigued. They were low on fuel and should have reached the islands by that time. In this moment of desperation, a flicker of light off the left side of the plane caught Maitlands eye. He banked left and directed the plane towards the light, which was roughly ninety miles to their south. After circling Kilauea Point while waiting for dawn, the plane continued on to Oahu where it touched down at Wheeler Field at 6:30 a.m. on June 29.

The lighthouse had literally saved the lives of the airmen. As Kaua`I is the westernmost of the inhabited Hawaiian Islands, had the flash of light not attracted Maitlands attention, the plane would have missed the islands completely and eventually plunged into the Pacific.

In 1930, two eighty-foot skeletal steel towers were added to the point, and the Kilauea radiobeacon commenced operating in synchronization with one at Makapu`u Point on Oahu. A generating plant was added to the station to provide electricity for the 200-watt radio beacon, allowing the lighthouses light source to be converted from an incandescent-oil-vapor lamp to electricity.

Following the attack on Pearl Harbor, Kilauea Point Lighthouse was darkened for the duration of World War II. The entry in the stations logbook for December 7, 1941 reads: Condition One is in orderKilauea Point light blacked out.

In 1974, the lighthouse became part of the Coast Guards Lighthouse Automation and Modernization Program (LAMP). While preparing the station for automation, complications arose with the mercury flotation system, necessitating the removal of the mercury. With the revolving lens now crippled, a modern rotating beacon was established on a ten-foot pole seaward of the tower and activated in February 1976. The original tower, though inactive, retained its priceless clamshell lens and was placed on the National Register of Historic Places on October 18, 1979.

Kilauea Point and its lighthouse became part of Kilauea Point National Wildlife Refuge, when it was established in 1985, and today there are more bird-watchers than lighthouse enthusiasts who visit the area. Even if you arent an expert on birds, it is thrilling to watch the Great Frigatebird and Laysan Albatross, with their large wingspans, soaring above the lighthouse. If you are lucky, you might even spot a Nene, an endangered Hawaiian goose, roaming the grounds.

In April 2009, a campaign to raise $1 million to restore the Kilauea Lighthouse was kicked off with a ceremony that included a Hawaiian chant and the relighting of the dormant beacon. On hand for the event were U.S. Senator Daniel K. Inouye and State Representative Hermina Morita. In 2012, McMillen, LLC was awarded the phase II construction contract for restoring the lighthouse. As part of this work, closed vents and windows were opened, new windows, corbels and doors were installed, and the towers exterior coating was restored to its historical appearance. The work was completed in time for the May 2013 centennial celebration for the lighthouse, during which it was renamed the Daniel K. Inouye Kilauea Point Lighthouse in honor of the long-serving senator who passed away in December 2012.

For a larger map of Kilauea Point Lighthouse, click the lighthouse in the above map.

Follow Highway 56 to the northern shore of Kaua`i and the town of Kilauea. In Kilauea, turn right onto Kolo Road and then take a quick left onto Kilauea Road which leads to the lighthouse.

Kilauea Point National Wildlife Refuge is open Tuesday through Saturday from 10 a.m. to 4 p.m. and can be reached at (808) 828-1413. The Kilauea Point National History Association has been formed to support the refuge and has set up a fund to restore the lighthouse. The lighthouse is open for climbing on a limited basis, and the lens is illuminated on special occasions.

The lighthouse is owned by the U.S. Fish & Wildlife Service and is part of the Kilauea Point National Wildlife Refuge. Grounds/tower open, dwelling closed.


After a visit to Kilauea Point, be sure to continue west around the northern coast of Kaua`i to where the road ends at the Na Pali Coast. Even if you only have an hour, a quick hike along part of the Na Pali Coast trail is time well spent. The northern coast of Kaua'i has some of the most lush and breathtaking scenery I have ever encountered, making it my favorite island in the Hawaiian chain.

Kilauea Point Lighthouse can be seen in the 2011 movie Soul Surfer.


This is one of my absolute favorite lighthouses. The beauty of the island and the coastline scenery makes this an incredible place to visit. Definitely a destination vacation spot.