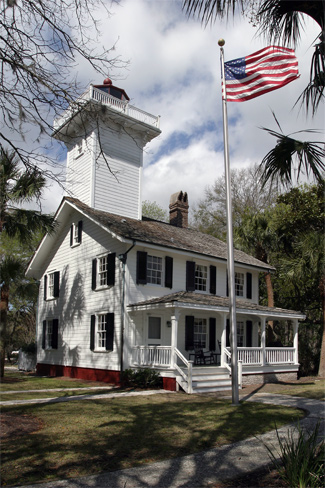 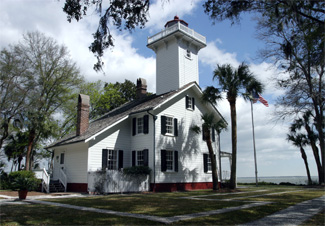 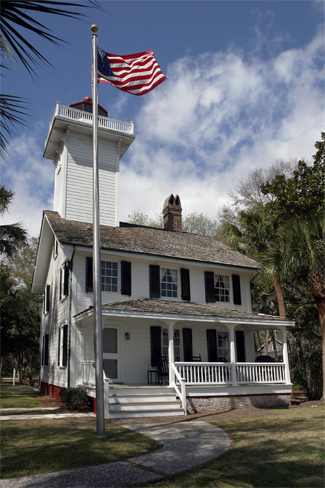 The history of Haig Point, (also known as Hagues Point or Haigs Point) reaches back into the colonial days when George Haig I, a Scottish merchant and Indian trader, purchased property in 1733 on the northern end of Daufuskie Island. The land remained in the Haig family for three generations until George Haig III sold the property around 1810 to the Mongin family. David John Mongin passed away in 1823, and his wife Sarah married Herman Blodgett in 1825. Sarah and Herman had been married for just eight years, when Sarah died in 1833. Herman Blodgett then purchased Haig Point Plantation from the Mongin family, and remarried in 1837, taking Catherine Hall as his second wife. On the northern end of his Haig Point Plantation, Blodgett constructed an impressive tabby mansion. Slave quarters, also built of tabby, were located nearby, and an avenue of live oaks lined the road to the mansion. Blodgett sold Haig Point Plantation in 1850 to Squire Pope, who owned multiple plantations on Hilton Head.

The tranquil plantation life was interrupted forever when Yankees arrived on the Sea Islands in 1861. After the battle of Port Royal ended on November 7, 1861, Union forces pushed south towards Savannah. Passing by Daufuskie Island, they spied Haig Point Mansion and decided its timbers would be useful in creating a road across boggy Jones Island, which lies just south of Daufuskie. The plantation mansion was soon pilfered, and the remains burned.

After the Civil War ended, the government rebuilt and added lights along the South Carolina coast. Calibogue Sound Lightship was established in 1855 to mark the entrance to Calibogue Sound, which runs between Braddock Point, the southern end of Hilton Head Island, and Daufuskie Island. In 1867, Congress appropriated funds for a lighthouse on Braddock Point to replace the lightship, but the Lighthouse Board decided a pair of range lights on Daufuskie Island would be more useful to mariners. As the 1867 appropriation had reverted to the treasury, Congress provided another $15,000 on March 3, 1871 for two small lights on Daufuskie Island, and an aggregate of five acres on Haig Point was acquired from the Pope family for $745. The five acres consisted of a triangular, three-acre parcel on the extreme northern end of the island and a triangular, two-acre tract 750 yards to the south. The Popes also granted certain privileges to the government: a right of way sufficiently wide for the convenient passage of vehicles, wagons, carts, etc., over and across the land lying between the two pieces or parcels of land and the right to cut down any shrubbery bushes or tress that may obstruct the view of the light houses to be erected upon said pieces of land.

In December 1872, James H. Reed of Washington D.C. was contracted to acquire all the material for the two range lights and dwelling, transport the material to the island, and supply the necessary labor to erect the structures all for $7,681. A two-story wooden keepers dwelling, with a tower extending from the eastern end of its pitched roof, was constructed on the foundation of Blodgetts plantation mansion. To the south, the smaller front range light was also built of wood. Work began on site in the spring of 1873, but the completion of the structures was delayed by the workers being ill during the summer. The ranges lights would serve two purposes: to guide vessels into Calibogue Sound and to facilitate safe passage between Port Royal Harbor and the Savannah River.

Patrick Comer was appointed first caretaker of the lights on August 29, 1873, with his wife Bridgett serving as his assistant. A fifth-order Fresnel lens produced a steady white light over an arc of 270 degrees from the rear towers focal plane of sixty-five feet, while a steamer lens illuminated an arc of 90 degrees from the front light. The Comers activated the lights for the first time on October 1, 1873. Ships would align the two range lights, which were separated by 750 yards, to safely enter Calibogue Sound. As the entrance to the sound would move due to shifting sand, the front range light was placed atop a pair of wooden rails so it could be moved to track the sounds entrance.

The government built a boathouse and ramp for the station in 1875, and in 1883 a dock was added so the boat could be used independent of the tide. In 1886, the earthquake that caused such extensive damage in Charleston shook Haig Point Lighthouse. Plaster rained down from the interior walls, which were subsequently covered with bead board that still remains in the lighthouse. Keeper Comer was in the lantern room when the first shock hit on August 31, and reported that the quake came like the roaring of a prairie fire and lasted fully fifty seconds. The stations clock stopped for the first time in thirteen years, noting a time of 9:25 p.m. Patrick Comer passed away in an upstairs bedroom in 1891 after eighteen years at the lighthouse.

Richard Stonebridge served as keeper of Haig Point Lighthouse for thirty-two years, beginning his service in 1891 and retiring on July 1, 1923. A fireproof oil house was constructed just east of the lighthouse in 1892 to store the volatile kerosene that was used in lighthouses during this period. Also, in 1895, a 6,000-gallon cistern was built just west of the lighthouse, replacing an earlier one with a capacity of 4,000 gallons. Rather than collecting water from the metal gutters attached to the eves of the roof, the new cistern was filled with well water. Perhaps the increased capacity of the cistern was what led to the installation of a bathtub in 1914.

Following Stonebridges retirement, Charles L. Sisson was appointed keeper, but a year later the station was discontinued. In 1925, the government sold Haig Point Lighthouse and the surrounding five acres through sealed bids to M.V. Haas of Savannah for $1,499.99. The lighthouse passed through the hands of several owners in quick succession, and then was used in the 1930s as a hunting lodge. Several wild parties were held at the lodge until an intoxicated member made his way to the top of the tower one evening. As he leaned against the wooden railing surrounding the lantern rooms walkway, the structure suddenly gave way. The tipsy hunter plummeted onto the roof of the lighthouse, bringing an end not only to his life, but the life of the parties as well.

Uninhabited during the following years, the lighthouse slowly deteriorated. Shutters and doors sagged from their hinges, the roof leaked, and all of the glass was broken out of the windows and lantern room.

After the government disposed of the lighthouse, Haig Point Plantation and Lighthouse were never owned by the same person until George H. Bostwick purchased Haig Point Plantation in 1961 and Haig Point Lighthouse in 1965. Bostwick set out to repair the neglected lighthouse as recorded in this 1967 account from a Beaufort County newspaper: Once a desolate ruin that gazed from the tip of Daufuskie Island through shattered windows, the structure now boasts fresh white paint, a new roof, refinished floors, modern electrical wiring, screened windows, and other refinements. The glasses in the lamp house have been replaced and the tower is capped with red roof paint.

On October 23, 1984, International Paper Realty Corporation purchased Haig Point with plans to develop a low-key, resort community. One of their first projects was to hire archaeologist Larry Lepinoka and historical architect Colin Brooker to date the tabby slave ruins and find the foundation of Haig Point Mansion. Digging around the lighthouse, they discovered the lighthouses foundation was actually part of the mansions tabby walls, and a fireplace from the original mansion was located underneath the lighthouses kitchen.

The massive foundations discovered at the lighthouse supported one of the largest tabby houses ever built. Rather than bury the foundations, the tops of the walls were capped with a cement similar to tabby, leaving an outline of the mansion tracing through the ground around the lighthouse.

Using the original plans for the dwelling, the lighthouse was meticulously restored under the direction of Bill Phillips. On October 18, 1986, Haig Point Lighthouse was re-lit in a festive ceremony that included a fireworks display and members of the Savannah Symphony playing Stars and Stripes Forever.

Today, the lighthouse is used to accommodate guests of the Haig Point community. A Plexiglas panel near the fireplace in the kitchen permits visitors to view the brick fireplace from the old tabby mansion. Those fortunate enough to spend the night will find a pair of bedrooms upstairs, and a kitchen, dining room, and living room downstairs. The wooden rockers on the front porch provide the perfect place to gaze out over Calibogue Sound as you sip a cool glass of lemonade on a warm southern evening and review the history that has transpired on Daufuskies Haig Point.

For a larger map of Daufuskie Island (Haig Point) Lighthouse, click the lighthouse in the above map.

The lighthouse is owned by the Haig Point Community. Grounds/dwelling/tower closed.