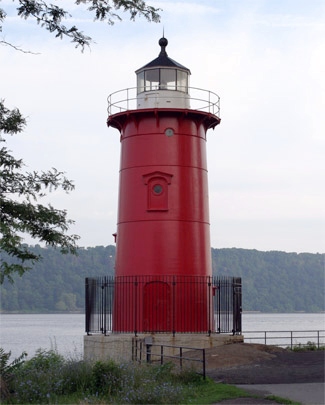 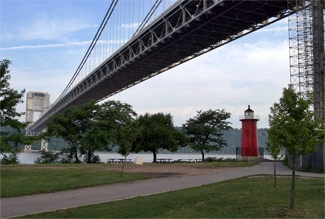 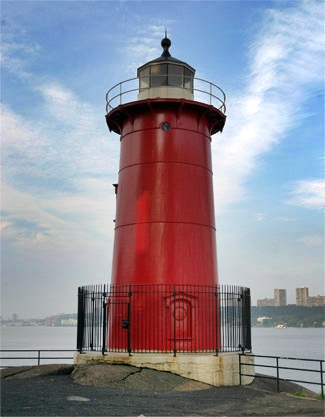 The Little Red Lighthouse stopped being used as a functional lighthouse long ago, but over the years, this forty-foot-high structure has become a beacon of another kind. Located underneath George Washington Bridge along a treacherous section of the Hudson River once known as Jeffreys Hook, this is one of the few surviving lighthouses in New York City and serves as a quaint reminder of the areas history. Long ago, Native Americans known locally as the Wiechquaesgeck, part of the Lenape tribe, inhabited much of upper Manhattan and eastern New Jersey. The Wiechquaesgeck, and later the Dutch and English colonists, fished and hunted along the banks of the Hudson River. The Hudson was also an important route for travel, connecting upstate cities such as Albany to New York City and the Atlantic Ocean. As traffic increased along the river, so did the number of shipwrecks at Jeffreys Hook. In an attempt to reduce accidents, a red pole was placed at Jeffreys Hook jutting out over the river to warn travelers of danger. A tubular-lantern post light was established at Jeffreys Hook on November 1, 1889, and the following year, a stake was sunk into the bank and fitted with two brackets, spaced ten feet apart vertically, from which two red lights were shown instead of one. Much of the land surrounding the lighthouse, including the riverbanks of Jeffreys Hook, was acquired by the city in 1896, and became known as Fort Washington Park.

In its 1895 annual report, the Lighthouse Board noted the need for improved navigational aids at Jeffreys Hook:

A larger light and a fog bell here would be valuable aids to navigation. The point extends well out into the river, with deep water close to its outer end. The usual route of steamers passing up or down the river is close to the point. The present post light should be replaced by a new structure, upon which should be the lantern with the bell below. It is estimated that these could be established on land to be acquired for the purpose for say $3,000, and it is recommended that an appropriation of this amount be made therefor.

The Lighthouse Board received permission from New York Citys department of public parks to occupy a site for the proposed light and fog signal, which reduced the estimated cost to just $1,400. The board repeated its request annually, and then in 1905, raised the amount to $3,400 so a keepers dwelling could be built.

It wasnt until 1921, however, that the Little Red Lighthouse and a fog signal were placed on Jeffreys hook. This cast-iron tower had originally been erected on Sandy Hook, New Jersey in 1880, where it used a 1,000-pound fog bell and flashing red light to guide ships through the night until becoming obsolete and being removed in 1917. Run by a part-time keeper and furnished with an acetylene-powered light that flashed white and a fog bell operated by machinery, the red lighthouse, known as Jeffreys Hook Lighthouse, was an important guide to river travelers for just ten years.

On September 21, 1927, ground was broken for a bridge across the Hudson River that would link West 178th Street in Manhattan to Fort Lee in New Jersey and require the relocation of Jeffreys Hook Lighthouse. As part of the ground breaking ceremonies, bridge authorities were granted permission to install loudspeakers around the deck of the lantern parapet.

George Washington Bridge opened in 1931, and its bright lights again made the lighthouse obsolete. In 1948, the Coast Guard decommissioned the lighthouse, and its lamp was extinguished.

The Coast Guard planned to auction off the lighthouse, but an outpouring of support for the beacon helped save it. The outcry from the public was prompted by the childrens book The Little Red Lighthouse and the Great Gray Bridge, written by Hildegarde Swift, illustrated by Lynd Ward, and published in 1942. In the popular book, the Little Red Lighthouse is happy and content until a great bridge is built over it. In the end, the lighthouse learns that it still has an important job to do and that there is still a place in the world for an old lighthouse. The classic tale captured the imaginations of children and adults, many of whom wrote letters and sent money to help save the icon from the auction block.

On July 23, 1951, the Coast Guard gave the property to the City of New York, and on May 29, 1979, the Little Red Lighthouse was added to the National Register of Historic Places. It did not receive much attention over the years, until City Comptroller Harrison J. Goldin worked with Parks Commissioner Henry J. Stern to find funding for its restoration. In 1986, Parks and Recreation hosted a party in honor of the lighthouses sixty-fifth anniversary and to celebrate a $209,000 renovation to the lighthouse that included reconstruction of the concrete foundation and the installation of new steel doors. In 2000, the lighthouse received a fresh coat of red paint that is true to its original historic color, along with new interior lighting and electric lines. Today, the Little Red Lighthouse remains a stalwart symbol of the areas heritage, lighting the way into the citys past.

An annual festival, held at the lighthouse in September, typically includes celebrity readings of The Little Red Lighthouse and the Great Gray Bridge and other activities geared towards children. Past readers have included such notables as Isabella Rossellini, Dee Dee Conn, and James Earl Jones. The light was reactivated on September 19, 2002, just before the tenth annual festival.

For a larger map of Jeffrey's Hook Lighthouse, click the lighthouse in the above map.

From near the intersection of W. 181st Street and Lafayette Place in Manhattan, take the footbridge over the West Side Highway and follow the cute markers to Jeffrey's Hook Lighthouse. The interior of the lighthouse is open to the public on select days during the summer. Call (212) 304-2365 for more information.