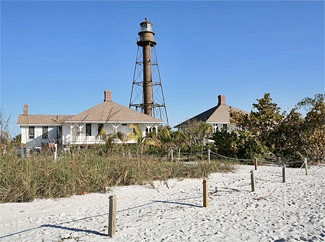 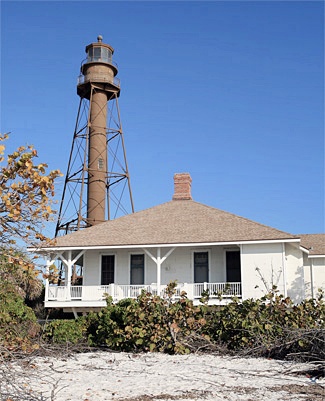 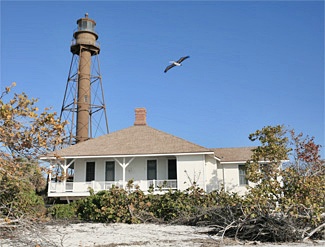 Much of Floridas southwestern coast is shadowed by a string of barrier islands. While most of these slender islands run in a general north-south direction, crescent-shaped Sanibel Island is positioned in more of an east-west direction. The Gulf current here sweeps up the coast from the south, and Sanibel Island, positioned sideways to the flow, scoops up an abundant supply of seashells. Numerous collectors flock to the island, now known worldwide for its shelling, and comb the beaches, hunched over in what is called the Sanibel Stoop, looking for the perfect shell. Traffic and tourists are relatively recent additions to Sanibel Island, as the causeway linking the island to the mainland was not constructed until 1963. Before that time, a ferry transported visitors to the island. Among the more notable ferry passengers were Thomas Edison and Henry Ford, who, during the winter, were next-door neighbors in Fort Myers, located just a short distance up the Caloosahatchee River from Sanibel Island. Long before these innovators arrived on the scene, the first settlement was established on the island in 1833. The small group of settlers petitioned for a lighthouse, but their request was not successful. Neither was their settlement. Due to disease and hardship, the settlement was abandoned in less than five years.

Punta Rassa, located on the mainland across San Carlos Bay from the eastern end of Sanibel Island, soon thereafter became a substantial port as cattle were driven to its docks from across Florida to be loaded onto vessels and transported to Cuba. In 1856, the Lighthouse Board recommended a beacon be established on Sanibel Island to light the port, but no action was taken. After the Civil War, another request for funding for the lighthouse was made in 1878, accompanied by the following justification:

A light on Sanabel [sic] Island would supply a want that has long been felt for a light-house between Key West and Egmont Key. The coastwise trade of Florida is considerable, and increasing. A great number of sailing-vessels, also six steamers, are now plying between Key West and ports on the west coast of Florida; and vessels bound across Florida Bay make their landfall at and take their departure from the southern point of Sanabel Island.

Congress was slow in granting sufficient funds for the project, but all of the needed $50,000 was finally obtained in 1883.

Work on the lighthouse began on the eastern tip of the island in February 1884, while the superstructure was fabricated in the north and shipped to the site. A 162-foot-long, T-head wharf was built on creosoted piles, allowing materials to be landed for the tower and for two square keepers dwellings, topped by hipped roofs and supported by iron pilings. Just two miles from Sanibel Island, the ship carrying the iron work from Jersey City for the towers at both Sanibel Island and Cape San Blas sank. Crews aboard the lighthouse tenders Arbutus and Mignonette, assisted by a diver, were able to fish up all of the pieces save two small gallery brackets, which were subsequently fabricated in New Orleans. Consisting of four iron legs arranged in a pyramidal fashion around a cylindrical central column topped by a lantern room, the lighthouse was ready to be lit by keeper Dudley Richardson on August 20, 1884. A third-order Fresnel lens graced the tower at a height of about ninety-eight feet and produced a fixed white light, punctuated every two minutes by a brilliant flash. Just like its twin at Cape San Blas, the central column of Sanibel Island Lighthouse stops about twenty feet from the ground and must be accessed by an external staircase.

Accompanied by his wife and two sons, Henry Shanahan moved to Sanibel Island from Key West in 1888, and two years later became the assistant keeper at the lighthouse. When Keeper Richardson resigned in 1892, Shanahan applied for the position of head keeper. At first, lighthouse authorities refused to promote him since he was illiterate, but, when he threatened to otherwise resign, they gave him the position. After a few years of living at the lighthouse, Shanahans wife died, leaving him with their seven children. A widow named Irene Rutland happened to also be living on the island raising her five children. Soon, she and Shanahan married, and then together had a son, making a total of thirteen children.

Needless to say, the family helped run the lighthouse. The Shanahans had a pet deer that would race up and down the beach along with a trained cat that would roll over like a dog. Henry passed away in 1913 after twenty-three years at the lighthouse, but his son Eugene, who had served as his fathers assistant for several years, would return in 1924 to carry on the familys connection to the lighthouse. Clarence Rutland, one of Henry Shanahans stepsons, served as an assistant keeper from a stint in the 1920s and again in the 1930s. Rutland left the following description of the daily routine at the lighthouse:

There were two men at the time. We changed watch each night at 12. It was an oil light then, and wed take a five-gallon can up full in the afternoon and pump the light and bring the can down empty in the morning.

The light had clockworks with weights on it and you had to keep that flashing to the second. Somebody had to be with it almost every minute. During the day, we had curtains we hung around every one of those prisms.

The Punta Gorda Herald of June 26, 1919 reported that Jesse W. Lee of Fort Myers had killed Richard T. Barry, assistant keeper of Sanibel Island Lighthouse, a few days earlier after Barry had reportedly insulted Lees wife. Five months later, a jury in Fort Myers acquitted Lee of murder. Lee admitted to killing the assistant keeper but claimed it was in self-defense. Keeper Barry was forty-five years old and was taken to Key West for burial, where he had earlier served as an engineer.

In 1923, the dwellings were modernized, receiving indoor plumbing and bathrooms, and enclosed porches. That same year, the light was converted from kerosene to acetylene gas. Roughly 670 acres were originally reserved for the lighthouse, but by 1923 the boundary of the station property only extended 1,000 feet west of the lighthouse.

Coastguardsman Bob England came to the lighthouse in 1946 with his wife Mae and infant daughter Margaret. The following year, a hurricane caused severe erosion on the island, and left one of the dwellings standing in a foot of water. Due in part to concerns over erosion, the lighthouse was automated in 1949, and England was assigned to the Fort Myers Coast Guard Station, from where he continued to service Sanibel Island Light along other aids to navigation in the area.

The dwellings were not long empty, as they became home later in 1949 to employees of the J. N. Ding Darling National Wildlife Refuge. Charles LeBuff lived in the assistant keepers cottage for twenty-one years, starting in 1958.

The Coast Guard electrified Sanibel Island Lighthouse in 1962 when the causeway was completed and electric conduit pipes were run along it for the island. In the process of electrifying the light, the Coast Guard removed the towers third-order Fresnel lens and installed a 300 millimeter drum lens that had been used on a lightship. A 190 millimeter beacon was placed in the lantern room in the 1980s, and the 300 millimeter lens was loaned to the Sanibel Historical Museum and Village, where it is currently on display.

In 1972, the Coast Guard proposed discontinuing the lighthouse, but feedback provided by local residents and mariners convinced them to keep it lit. The City of Sanibel assumed management of the lighthouse property, except the tower, in 1982, and city personnel were allowed to live in the dwellings rent-free in exchange for helping to maintain and supervise the grounds.

The property was transferred from the Coast Guard to the Bureau of Land Management (BLM) in 2000. The BLM accepted an application from the City of Sanibel for custody of the property in 2004, and after a lengthy delay, the lighthouse was officially transferred to the city during a ceremony held April 21, 2010. Using a $50,000 state historic preservation grant and money from its beach parking fund, Sanibel City Council awarded a $269,563 contract to Razorback LLC in May 2013 to restore the lighthouse. During the summer of 2013, the contractors replaced sections of deteriorated steel on the tower and then sanded and painted the exterior. The City of Sanibel has certainly shown it is committed to preserving the lighthouse property. In 2016, the lighthouse, dwellings were added to the City of Sanibels Register of Historic Sites and Structures.

For a larger map of Sanibel Island Lighthouse, click the lighthouse in the above map.

From Interstate 75 just south of Fort Myers, take Exit 131 (Daniels Parkway) west to Summerlin Road. Follow Summerlin Road to the Sanibel Causeway, which requires a toll. Drive across the causeway onto Sanibel Island. At the four-way stop sign turn left on Periwinkle Way and follow it to the eastern end of the island, where you will find signs to guide you to metered parking for Sanibel Lighthouse.

The lighthouse is owned by the City of Sanibel. Grounds open, tower/dwellings closed.


This "Sanibel Stoop" thing isn't just a catchy phrase; it is for real. During a visit to the island early on a Sunday morning in 2006, we encountered dozens of people patrolling the beach looking for the perfect seashell, and yes, a lot of the time they are bent over at the waist. One guy with a netted sack, apparently made for shell collecting, waded about ten yards offshore and seemed to be having the most success, judging by the fullness of his sack. I was dying to join in the fun, but unfortunately I was attired for church, and soon had to leave for that other form of worship.