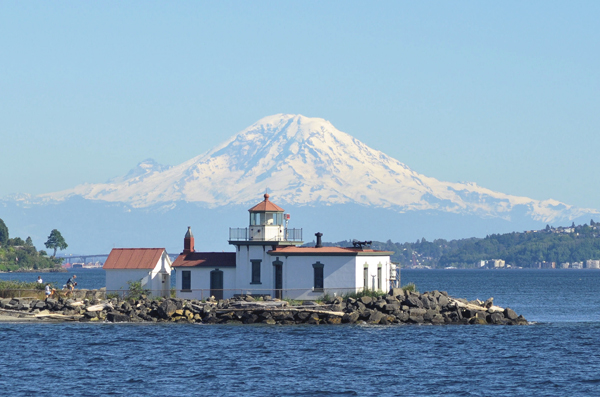 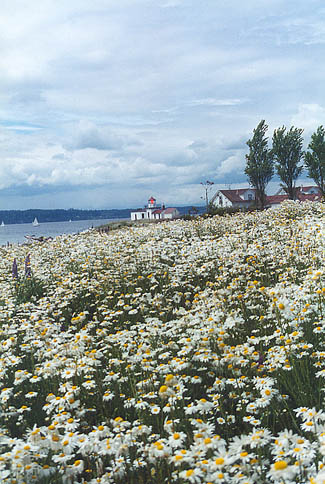 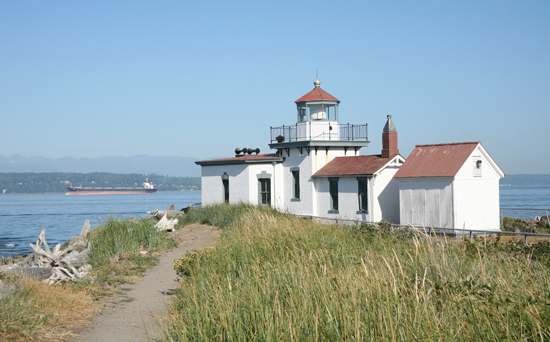 Situated at the end of a low, half-mile-long, sandy point that extends into Puget Sound from the base of Magnolia Bluff, West Point Lighthouse still sends out alternating red and white flashes, but a modern beacon has taken over the function from the historic fourth-order Fresnel lens that is still mounted in the lantern room. Lieutenant Charles T. Wilkes, leader of the United States Exploring Expedition, named the sandy spit West Point in 1841, but it was known to early mariners as Sandy Point and to the Duwamish Indians as Per-co-dus-chule, meaning thrusts far out. In 1879, the Lighthouse Board noted the need for navigational aids in Puget Sound:

There is no aid to navigation in Admiralty Inlet or Pugets Sound established, or proposed to be established, by existing legislation, south of Point-no-Point; and it is highly essential that this magnificent sheet of water, which has not its equal in the world, should be so marked by fog signals as to render its navigation from Cape Flattery to Olympia possible at all times without danger to life and property. Following the inlet south from Point-no-Point, the point or spit which deserves attention is West Point. This is the first prominent point or sand-spit north of the busy town of Seattle, on the east side of the inlet (or Puget's Sound, the dividing line not clearly defined) and nearly opposite the center of Bainbridge Island. A 10-inch fog-whistle is recommended for this station. It will cost $10,000, and an appropriation of that amount is accordingly recommended.

Congress appropriated the requested amount for a fog signal at West Point on June 14, 1880, but another act, passed on March 3, 1881, made the money applicable for the establishment of a lighthouse on the point as well.

After six acres on the tip of the point had been purchased from John Leary, construction of the station commenced on July 6, 1881. A low, square, brick tower, with an attached watch room and oil room, was built at the outer end of the spit, and a pyramidal, frame tower for a fog bell was erected just to the rear of the lighthouse. The 1,600-pound bell used at the station was relocated from Cape Disappointment, where it had been in service since 1856. A five-room, one-and-one-half-story, frame cottage was constructed east of the lighthouse for the keeper.

To provide support for the eleven-foot-square lighthouse, a brick foundation was built atop a grillage of timber that was laid three feet below the surface of the ground. The brick tower is topped by an octagonal, iron lantern room, which makes the height of the lighthouse twenty-one feet, when measured from the ground to the ventilator ball atop the lantern room. A fourth-order Fresnel lens, manufactured in Paris by L. Sautter, Lemonnier, et Cie., was installed in the lantern room. The lens has twelve bulls-eye or flash panels and originally revolved once every two minutes to produce red and white flashes, spaced by ten seconds. Ruby panels, which reduced the visibility of the would-be white beams from nineteen to sixteen miles, were attached to alternate flash panels to create the red flashes. The lens was propelled by a weight that descended through a thirteen-foot drop tube and had to be wound up every two-and-a-half hours.

Since the lighthouse commenced operation on November 15, 1881, it has guided countless vessels into Seattles Elliot Bay, located just south of the point. When the Lake Washington Ship Canal was completed just north of West Point in 1917, the lighthouse also served as a marker to the entrance of this liquid link between Puget Sound and Lake Union and Lake Washington.

In 1886, the Lighthouse Board decided to replace the fog bell by a Daboll trumpet operated by a caloric engine, and as the new fog signal would require more attention than the bell, funds were also provided to construct an additional dwelling. Work on the fog signal building and dwelling began in June and was completed on September 15, 1886. The fog signal machinery arrived in late December, and the Daboll trumpet was placed in commission on February 7, 1887. No longer needed, the fog bell was transferred to its final home at Oregons Warrior Rock Lighthouse.

The fog signal was in operation roughly 350 hours per year, but in 1897, it logged 892 hours and consumed about seven tons of coal. In 1901, the Lighthouse Board decided that the old fog signal was worn out, and work on the brick fog signal building, attached to the west face of the light tower, began that July. The old frame fog signal building, which stood east of the lighthouse, was converted into a storehouse. The new fog signal machinery, which commenced operation on December 29, 1901, consisted of two one-and-a-half-horsepower oil engines that were connected to air compressors for sounding the Daboll trumpet. Interestingly, there have been a varying number of fog trumpets used at West Point Lighthouse. This 1916 photograph shows horns on the north, south, and west sides of the fog signal building, while an inline photograph on this page appears to show a trumpet on just the west side, and this 1944 photograph shows a fog trumpet on the east side of the oil house along with a pole for the stations new radiobeacon. The horn on the oil house was not present in this 1938 photograph.

George T. Fonda, the longest serving keeper at West Point Lighthouse, was brought in from Cape Flattery to replace Alfred Martin in 1883, and John C. Ward was appointed assistant keeper in 1887 when the Daboll fog signal commenced operation. During Fondas watch, the Lighthouse Board issued its first standardized lightkeepers uniform consisting of navy blue trousers, a double-breasted coat with brass buttons, and a billed cap. The uniform was expected to increase the efficiency of the Lighthouse Service and bolster its esprit de corps.

The first keepers were quite isolated on the point, but they were provided a boat and a boathouse so they could row the seven miles to Seattle. In 1883, a half-mile-long horse trail was made up Magnolia Bluff to connect the station to the nearest wagon road. In 1900, Fort Lawton was opened on the bluff overlooking the station to help defend Seattle and Puget Sound.

In late November 1902, Assistant Keeper Sylvenus Shepard discovered the body of his wife on the beach near the lighthouse. A newspaper account of the discovery stated, It is believe that the woman, while despondent, drowned herself. Another tragedy struck the station on December 3, 1913, when Assistant Keeper James E. Shaw fell overboard from an open boat, in which he was returning from Ballard with his family, and drowned.

Louis A. Pettersen was in charge of the lighthouse from 1913 to 1932, after having spent four years as assistant, and received several commendations during his lengthy service. In 1916, a small sailboat capsized off the point in a squall, spilling Harry Christensen into the sound. Keeper Pettersen sprang into action, rescued Christensen from drowning, and then provided him dry clothing. The following year, Pettersen towed the disabled sailboat Mist, which had ran onto rocks near the station, to a nearby marina for repairs. Pettersen must have been a meticulous keeper as he was awarded the efficiency flag on at least two occasions for having the model station in the district. After winning this award, Pettersen was allowed to fly the efficiency flag at West Point during the succeeding fiscal year.

A salt marsh located between the station and the bluff was a breeding ground for swarms of mosquitoes. Roswell Heins lived at West Point Lighthouse when his father, Otto Heins, was an assistant keeper for several years around 1920. Roswell recalls that the marsh was the best mosquito bog Seattle ever had as we had to wear nets around the houses and yards. But what was worse was the raw sewage from Seattle that was dumped on West Point. It wasnt uncommon to have four to six inches of sewage on the beach. We could hardly use the beach on the North side, Roswell recalls. In the summer, when the tide was out we had to keep our doors and windows closed when the wind was north, as the smell was terrible. Things improved when the West Point Treatment Plant, capable of processing 133 million gallons of wastewater per day, was completed east of the lighthouse in 1966.

A diaphragm air horn replaced the Daboll trumpet at West Point in June 1944. This new fog signal sounded a three-second blast every thirty seconds, instead of a five-second blast every thirty seconds. Today, mariners need to key their radio mic five times on channel 81A in order to activate the stations fog horn, which will then remain in operation for thirty minutes.

Chief Boatswains Mate Christian Fritz served at the station during the twentieth century after the Coast Guard became responsible for the lighthouse. The level terrain on the point permitted Fritzs blind wife to freely stroll the stations grounds with the assistance of her Boxer guide dog Cookie.

In 1979, the station was slated for automation, but the wish of Marvin Gerber, the keeper at the time, to have the lighthouse still be manned for its centennial came true when the automation was postponed. On November 15, 1981, Gerber climbed atop the lighthouse and celebrated its centennial by dousing it with a bottle of champagne. Gerber enjoyed his time at the station and even succeeded in adapting his telephone conversations to twenty-seven seconds of talk followed by three seconds of silence to match the signature of the foghorn.

After all the other lighthouses in the State of Washington had been automated, West Point Lighthouse finally succumbed to automation in 1985.

West Point Lighthouse is now part of Discovery Park, Seattles largest city park, which also includes Fort Lawton. In late 2002, West Point Lighthouse was declared surplus by the federal government under the National Historic Lighthouse Preservation Act of 2000. The City of Seattle was awarded ownership of the lighthouse in 2004, and obtained the deed to the property in 2006. Between September 2009 and the following June, lead paint was stripped from the lighthouse, and its exterior was restored.

From Highway 99 north of Seattle, exit onto Western Avenue which will become Elliott Avenue and then 15th Avenue. Drive just over a mile on 15th Avenue and then go west on Dravus Street. Just after the railroad tracks turn right on 20th Avenue, which will become Gilman Avenue. Gilman Avenue will become Government Way, which will take you into Discovery Park. Stop by the visitor center and inquire about the lighthouse. Only handicapped parking and permit parking is allowed at the lighthouse. Permits are available on a first-come, first-served basis at the Discovery Park Environmental Learning Center, Tuesday through Sunday from 8:30 a.m. to 5 p.m. Permits are only for those who otherwise would not be able to get to the beach - families with children under 8, people over 62, and others who are not physically able to walk to the beach due to and injury, illness or some other physical condition. From the Discovery Park Visitor Center it is just under a two-mile walk to the lighthouse. Call (206) 386-4236 for more information.

Another way to view the lighthouse is from the water. Argosy Cruises offers a locks cruise that passes by West Point Lighthouse.

The lighthouse is owned by the City of Seattle. Grounds open, dwellings/tower closed.


Be careful of the driftwood lying on the shores around the point. In addition to picking up some great views of the lighthouse, I also picked up three nail punctures in my foot from climbing on the driftwood. Like a true lighthouse fanatic, I opted to visit another lighthouse or two that day rather than seek medical attention.