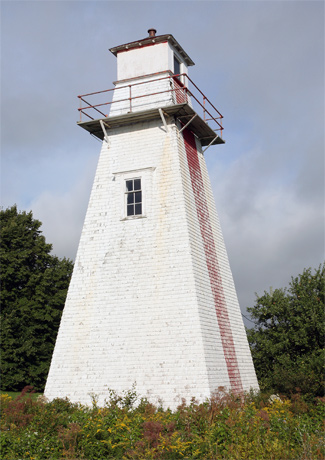 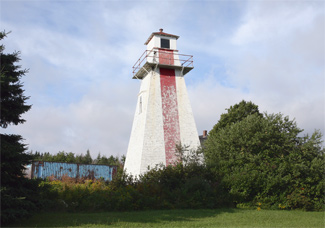 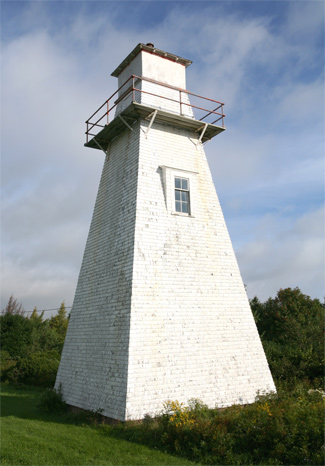 The 1917 edition of the St. Lawrence Pilot carried the following information for mariners sailing between Prince Edward Island and the coasts of New Brunswick and Nova Scotia.

There are few places in which more care is required in navigation than in Northumberland Strait, which is 160 miles in length; and which, at Cape Tormentine, the narrowest part, is but 7 miles from shore to shore.

John Page, Chief Engineer of Public Works for the Dominion of Canada, visited Cape Tormentine during the summer of 1868 to select a site for a lighthouse to guide mariners through this treacherous section of Northumberland Strait. Three locations were considered: 1) Indian Point, the eastern extremity of Cape Tormentine, 2) Cape Jourimain, situated a few miles west of Cape Tormentine, and 3) a point between the first two options. Cape Jourimain was found to be the most eligible position, and a wooden lighthouse was constructed there in 1869.

Year-round steamer service to Prince Edward Island from Pictou, Nova Scotia was initiated by the Northern Light in 1876, but the vessel was often icebound for weeks at a time during the winter. The Stanley replaced the Northern Light in 1888, and after the Minto was added to the island service in 1897, the Stanley initiated winter service between Cape Tormentine and Summerside in 1902. Finally, in 1917, ferry terminals were completed at Cape Tormentine and Borden-Carleton on Prince Edward Island, and the railcar ferry Prince Edward Island began serving this short route. Though originally designed to carry only railcars, an automobile deck was later added to the Prince Edward Island, which remained in service until 1969. Besides this ferry, another ten vessels serviced this route through the years.

The front and back towers of the Cape Tormentine Entrance Range were both enclosed, square, pyramidal, wooden towers, topped by square wooden lanterns. The front tower was 7.9 metres (26 feet) tall, and the back tower, situated 303 metres (331 yards) from the front light, was 12.8 metres (42 feet) tall. Both towers were painted white.

In 1955, another set of range lights was built on Indian Point, just east of the ferry landing at Cape Tormentine. Dana Allen served as keeper of the Indian Point Range from 1955 until the lights were electrified in 1962.

For a larger map of Indian Point Range Rear Lighthouse, click the lighthouse in the above map.

From Highway 16 traveling from Port Elgin towards Prince Edward Island, take the next-to-the-last exit before Confederation Bridge (Exit 47) and drive east on Route 955 towards Bayfield and Cape Tormentine. After roughly 4.8 km (3 miles), you will pass Cape Tormentine Campground at the intersection with Immigrant Road. From this point, continue east on Route 960 for 2.7 km (1.7 miles) and you will see an unpaved road (Vista Drive, though it might not be signed) on your left that leads to a collection of cottages near the shore. Indian Point Rear Range Lighthouse is visible down the next unpaved road just beyond Vista Drive.