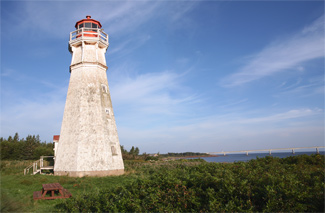 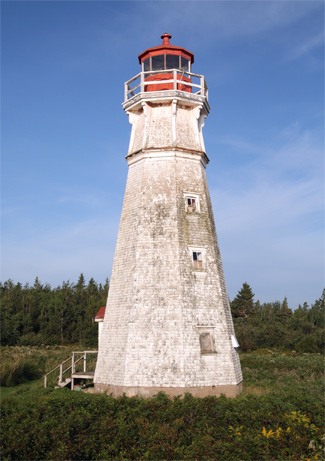 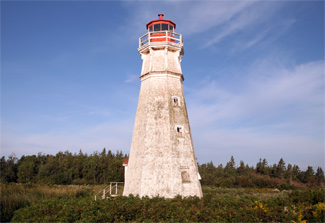 Cape Jourimain is defined as the northern extremity of the Jourimain Islands, which are situated a few kilometers northwest of Cape Tormentine. The islands are linked together and with the mainland by sand bars and were considered navigational hazards being located at the narrowest part of Northumberland Strait, which separates New Brunswick and Prince Edward Island.

In August of 1868, John Page, Chief Engineer of Public Works, proceeded to Northumberland Strait and examined Indian Point, Cape Tormentine and Cape Jourimain to select the most advantageous spot for a lighthouse. Page determined that Cape Jourimain was the best position, "it being the extreme point of land to vessels passing in either direction through the strait; whilst those in the ordinary track from the eastwards by bearing directly for it, would fully clear the dangerous Tormentine reefs, and could proceed westwards, within a mile and a half of the light with safety." The Chief Engineer recommended that a forty-foot-tall tower and detached keepers dwelling be constructed, with the tower preferably being built of non-combustible materials. If stone were used for the tower, the projected cost for the pair of structures was $8,500, while if a wooden frame tower was selected instead, the cost was estimated at $3,500.

The less expensive plan was evidently selected, as Parliament approved the expenditure of $3,500 for the construction of a lighthouse on Cape Jourimain in Westmorland County, and a contract was entered into with the Department of Public Works in New Brunswick to build a keepers dwelling and a tower for $2,974. Work on the structures was completed during 1869 with the exception of the installation of the lighting apparatus, which still had not arrived by the end of the year. John Bent was appointed keeper of Cape Jourimain Lighthouse at an annual salary of $200, and on May 15th, 1870 he first exhibited a temporary light consisting of three lamps, which was used until the intended lighting apparatus, three lamps set in twenty-three-inch reflectors, was installed on June 7th.

Lewis Wells was paid twenty dollars for watching over the buildings from the time they were completed in December of 1869 until John Bent was appointed keeper on April 1, 1870. A well for fresh water and a landing were not provided when the lighthouse commenced operation, but seventy dollars was requested so that they could be built. Purchasing land for and obtaining a right-of-way to the lighthouse also took additional time, but they were finally obtained at an expense of $200 from M. Allen. Work on a turnpike road to connect the lighthouse to the public road was commenced in 1872 under a $100 contract to George Allan.

On June 14, 1875, Keeper John Bent and three others drowned while returning to the lighthouse in the station's sailboat from Summerside on Prince Edward Island. Silas Ross, who had a family of four at the time, filled in as a temporary keeper until Arthur W. Bent was hired. The station's boat was recovered, but the cost of repairing it was too much, so a boat formerly used at Quaco Lighthouse was provided to Cape Jourimain along with a marine telescope and flag.

The original lantern room, which had a diameter of just four-and-a-half feet, was always considered too confining as it prevented the keeper from passing around the lights and made it difficult for him to trim the lamps. A new lantern room was installed in 1876, and the light source was upgraded to circular-wick lamps set in three twenty-four-inch reflectors and four twenty-two-inch reflectors. The characteristic of the light remained fixed white. The seven lamps were soon found to be too many, as the excessive heat broke a number of glass panes in the lantern room, so the number was reduced to five.

On June 15,1878 the characteristic of the light was changed from fixed white to flashing white through the installation of a revolving apparatus equipped with four lamps, each backed by a reflector. The apparatus made one revolution every forty seconds, producing a white flash every ten seconds. The salary for Keeper Arthur W. Bent was raised from $250 to $300 owing to the increased labor required in attending the revolving light.

The following work was done at the station in 1895 by Milton Walsh, foreman for the Marine Department on Prince Edward Island.

The old sills of the tower were removed and replaced with new sills. The lower floor was taken up and replaced with new sleepers and new plank. The foundations were rebuilt, use being made of the stone in the old foundation. The support braces were taken down and iron anchor posts were attached to each of the octagonal posts of the tower and secured in the foundation, being firmly screwed down by nuts at their attachment to posts.

The walls of the lean-to or kitchen attached to the dwelling have been shingled and a well sunk in the kitchen.

The fence around the grounds has been repaired by placing twelve new stone posts, as also new boards and rails where found necessary, and a new gate was placed at the entrance of the grounds. A new door was also put in the dwelling. A new fence six feet high has been erected around the garden.

In 1910, Cape Jourimain Lighthouse was moved to a new site by day labour under the direction of B.W. Allen at a cost of $400.54. The illuminating apparatus was improved in 1914 through the installation of a fourth-order dioptric lens.

Cape Jourimain Lighthouse was automated in 1970, and then was decommissioned in 1997 with the opening of the Confederation Bridge. The wooden, octagonal lighthouse was designated a Federal Heritage Building in 1991 due, in part, to classically inspired details such as the elongated bracketed cornice, the use of belt courses and crown trims and the prominent gallery guardrail.

Cape Jourimain, an important stopover for migrating birds, was designated for protection by the Canadian Wildlife Service in 1980. The communities near Cape Jourimain were hit hard by the closure of the Cape Tormentine  Borden ferry service and declines in the fisheries, but the opening of Cape Jourimain Nature Centre in 2001 has provided new jobs and tourism.

Although Cape Jourimain Lighthouse is now surrounded by the Nature Centre, the Coast Guard remains responsible for the tower. In 2010, Greg Fallon, executive director of the centre, noted that his organization would love to assume ownership of the tower, which desperately needs to be moved away from an eroding shoreline, but the group cant afford to maintain the historic structure. Cape Jourimain Lighthouse is one of the most picturesque and historic lighthouses in New Brunswick and certainly merits special consideration.

After a major facelift, Cape Jourimain Lighthouse was opened to the public in July 2019. All the windows and doors along with the exterior shingles were replaced. A series of picture panels on the first floor of the lighthouse tell its history.

Located on the northeast tip of Jourimain Island, near the southern end of the Confederation Bridge.
Latitude: 46.15723, Longitude: -63.80714

For a larger map of Cape Jourimain Lighthouse, click the lighthouse in the above map.

From Highway 16 traveling from Port Elgin towards Prince Edward Island, take the last exit before Confederation Bridge to arrive at Cape Jourimain Nature Centre. An entrance fee is necessary to access the trail system, which includes a 1.8 km Lighthouse Trail loop that passes by Cape Jourimain Lighthouse. Starting in 2019, the lighthouse is open to the public. Click here for hours.