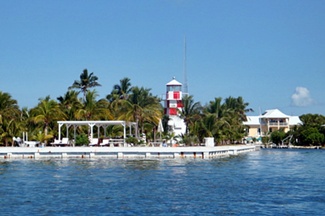 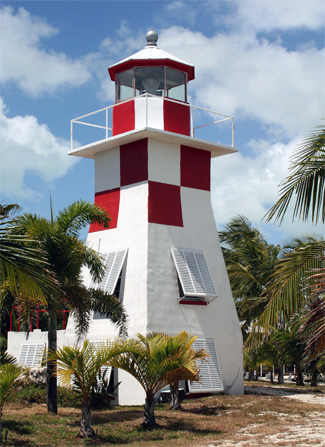 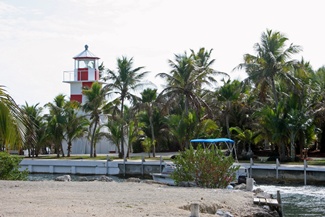 Thanks to the interest in and research by the owners of the lighthouse, David and Mariana McGraw, and work done by others, the history of this interesting lighthouse can now finally be pieced together. Part of the two-acre Key Largo Lighthouse and Marina property in the Florida Keys, this lighthouse has far more significance than your typical faux lighthouse, for it incorporates the only known surviving piece of the famous but long-gone Rebecca Shoal Lighthouse. The first attempt to mark Rebecca Shoal was in the 1850s, when Lt. George G. Meade examined the shoal in 1853 and then prepared and submitted plans for a day beacon later that year. The Lighthouse Board sanctioned the work on January 10, 1854, and the necessary materials were shipped to Key West in May of that year. Due to a failure to procure mangrove piles for the platform and the lack of sufficient funds to complete the project, erection of the beacon had to be postponed until 1855.

Work at the site commenced during the last week of April in 1855, and three weeks later, the platform, built on trestles, was nearly completed, when a violent gale forced the work party to seek refuge at Dry Tortugas. When they returned three days later, there was no trace of the platform. After new materials were obtained, work on a second platform began, but it was lost when the trestle foundation settled unevenly in the sand. The seabed, which was thought to have been mainly coral, turned out to be quite sandy, and it was determined that piles would have to be driven. A pile driver was set up on the deck of a vessel, but after waiting three weeks in the vicinity of the shoal for calm seas, the eight-month term of service to which the work party was committed expired, and they could not be persuaded to remain on site.

Another work party was assembled and taken out to the shoal in early August, but after six weeks of rough weather, they were unable to initiate the work, and the project was abandoned for the season. George Meade summarized the status of the work for the Lighthouse Board.

In reporting this failure, which no one can regret more than myself, I feel it proper to observe, 1st, that this result was not unlooked for; indeed, in my special report, submitting a design, it was distinctly alluded to as extremely probable. I believed then, and am satisfied now, that no light-house structure of any kind has been erected, either in this country or in Europe, at a position more exposed and offering greater obstacles than the Rebecca shoal. 2d. Notwithstanding the want of success attending the attempt here reported, I feel confident that everything was done that existing circumstances permitted, and the failure is to be attributed entirely to the unfavorable character of the season.

Though Meade requested additional funds to continue the efforts to erect a lighthouse on Rebecca Shoal, a simple iron screw-pile day beacon was placed on the shoal in 1858 instead. A screwpile lighthouse to mark the Northwest Passage, which Meade also submitted plans for in 1853, was successfully completed in 1855, but it was located just seven miles northwest of Key West, not forty-eight miles west of Key West like Rebecca Shoal.

In 1883, the Lighthouse Board again requested funds for a light on Rebecca Shoal to illuminate the dark space between the lights at Sand Key and Dry Tortugas. The establishment of this light, the Board wrote, will complete the plan for the proper lighting of these reefs, which was formulated by the preliminary commission of 1851, and which has been kept steadily in view by the Light-House Board. Its importance is shown by the number of wrecks which have taken place in this unlighted space, and by the large number of vessels constantly passing in this vicinity. The district engineer estimates that a proper structure superimposed upon the 12-inch wrought-iron piles now upholding Rebecca Shoal day-beacon, with perhaps other piles added, will cost but $20,000; this, however, is doubted by some members of the Board, but $20,000 is all that is asked for expenditure on this work during the coming year.

The ironwork for the lighthouse was delivered to Key West in 1885, and the superstructure was framed and stored at the same place until the spring of 1886, when work began on the shoal. Divers had to move large rocks so that iron disks for supporting the lighthouse could be properly placed on the seafloor. The one-and-a-half-story wooden lighthouse, with a hipped roof interrupted by dormer windows and topped by the lantern room, commenced operation on November 1, 1886, showing alternately red and white flashes. In 1893, a red sector was introduced so that only red flashes were shown over a portion of the lights arc of visibility.

In August 1914, Head Keeper Thomas M. Kelly and his two assistants, Joseph P. Roberts, Jr. and Thomas L. Kelly, were commended by the Secretary of Commerce for rendering assistance to the steamship Nordvahlen, which went aground near Rebecca Shoal. The two assistants set off in the stations boat to secure the services of a wrecking schooner, which, with the help of the keepers, succeeded in floating the Nordvahlen in short time.

In 1918, Professor S.C. Ball of the Massachusetts Agricultural College spent a month at the lighthouse, which was twelve miles from the Dry Tortugas, the nearest land, to find out just how far mosquitoes could fly. Ball captured and counted mosquitoes and found that they arrived in the greatest quantity when the wind blew from the north or south. When a strong wind started to blow from the south, Ball discovered that mosquitoes would arrive about ten hours later. As Cuba was the nearest land mass in that direction, Ball deduced that the pesky insects could travel about ten miles per hour, since Cuba was distant ninety-five miles. When the winds came from the north, more time elapsed before the arrival of the mosquitoes, leading Ball to conclude that they had come from Tampa, nearly 150 miles away. Balls findings showed that communities wanting to eliminate mosquitoes would have to be concerned about stagnant water over a much larger area than previously thought necessary.

On August 1, 1925, Rebecca Shoal Lighthouse was automated through the installation of an acetylene gas system, and keepers no longer had to risk their lives living at the remote station. The new light, consisting of a triple flasher set in a fourth-order fixed lens, replaced an oil lamp set in a fourth-order revolving lens, and could be more easily seen by the keepers at Loggerhead Key Lighthouse. The cost of automating the light was $1,175, but it resulted in an annual saving of $3,570.

Deterioration and vandalism gradually took their toll on the unmanned structure. In 1953, the house was removed, and the iron lantern room was taken down and sold for scrap. Somehow, the lantern room survived and eventually found its way to a scrap iron dealer in Ocala, Florida.

In 1959, a previous owner of the Key Largo Lighthouse and Marina property was interested in building a lighthouse at the end of his property where a canal enters the Atlantic Ocean. Having heard about the original Rebecca Shoal Lighthouse lantern room, which was being offered for sale by the junk dealer in Ocala, Florida, he sent a crew to recover the lantern and bring it down to Key Largo for installation on the top of his new lighthouse. Contactor Ralph Smith, who was in the process of also building the surrounding subdivision at that time, built the concrete base and tower of the lighthouse.

By the time the McGraws purchased the property in 2001, the lighthouse had badly deteriorated. David McGraw, however, was fascinated by the old lighthouse and wisely decided to restore it. The lighthouse, painted with a white and red checkerboard daymark, and its historic lantern are in excellent condition. McGraw set up two guest rooms and a restroom inside the structure for people who might like to stay in a lighthouse while visiting. These guests would truly be amazed if that original lantern could tell of the adventures it saw during a period of sixty-seven years atop Rebecca Shoal Lighthouse.

In 2014, the sixty-six-foot-tall light tower that had been marking Rebecca Shoal for many years was judged unstable and unsafe. The Coast Guard deactivated the light and replaced it with a nearby lighted buoy but left the abandoned tower standing.

In 2020, the compound that includes Key Largo Lighthouse was placed on the market for $7.9 million.

For a larger map of Key Largo Lighthouse, click the lighthouse in the above map.

From Highway 1 in Key Largo, go south on South Ocean Bay Drive and then turn left onto Seagate Boulevard. Just before the end of Seagate, turn right onto Beach Road. A view of the lighthouse, located across a channel, was possible in 2010 from a vacant lot on Beach Road. This view will likely no longer be possible after construction on the lot is completed.


There is a "lighthouse" located off Key Largo known as Molasses Reef Lighthouse. This structure was never manned but did display a light to warn mariners away from the dangerous reef. You can view the tower aboard a glass bottom boat ride out of John Pennecamp Coral Reef State Park (located at mile marker 102.5 in Key Largo).