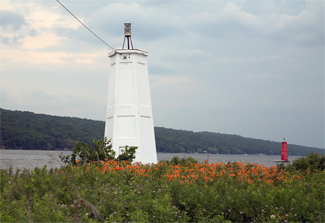 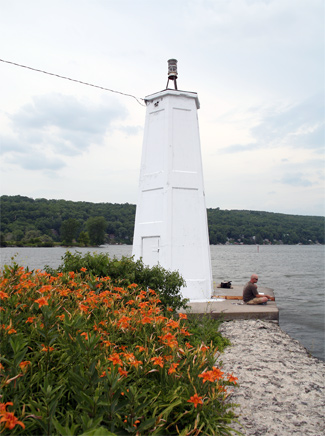 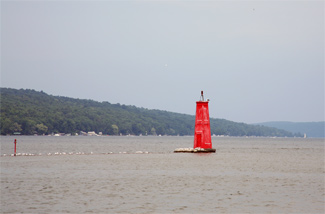 With a length of thirty-eight miles, Cayuga Lake is the longest of the collection of lakes in Upstate New York known as the Finger Lakes. Neighboring Seneca Lake is just slightly shorter in length, but has more surface area. These two lakes are by far the largest of the Finger Lakes, and in the early 1800s the economic advantages of a navigable link between the two bodies of water was being actively promoted. The Seneca River connected the northern end of the two lakes, but two obstacles, Seneca Falls and Schauyes Rapids, prevented navigation on the river.

In 1813, Seneca Lock Navigation was incorporated, and work was begun that same year on a canal, which was to be at least forty feet wide and four feet deep, to connect the two lakes. Eight locks were constructed along the route to provide the necessary change in elevation. Originally slated for completion in 1818, the nine-mile-long canal was finally opened for inter-lake traffic in 1821.

The Erie Canal, which would have such a remarkable impact on the State of New York and indeed the entire nation, was completed four years later in 1825. On April 20th of that year, the New York State Legislature authorized the construction of the Cayuga and Seneca Canal, which would connect the Erie Canal at Montezuma with Lake Seneca and Lake Cayuga. This link cost $160,396.78 to construct plus $53,603.53 paid to Seneca Lock Navigation for its rights and was opened on November 15, 1828. A towpath was built adjacent to the canal to permit barges to be pulled by mules or horses. Previously, pole pikes had been used to slowly propel the barges between the two lakes.

The advent of railroads in the late 1800s seriously threatened the Erie Canal and its tributary canals, and in 1903, the State of New York presented voters with a referendum that would replace the antiquated Erie Canal with the New York State Barge Canal. This new canal would have a depth of twelve feet and enable the passage of vessels with a capacity thirty-three times greater than those used on the old canal. A second referendum was approved in 1909 that provided for upgrades to the Cayuga and Seneca Canal that would make it compatible with the barge canal. Both of the new canals became operational in 1918.

Coinciding with the improvements to the Cayuga and Seneca Canal was the construction of Cayuga Inlet Lighthouse in 1917 on the west side of the juncture of Cayuga Creek with the southern end of Cayuga Lake. A decade later, under Contract H of the Department of Transportation, the light was relocated to the eastern bank of Cayuga Creek and a marina, now Allan H. Treman State Marine Park, was built where the tower had formerly stood. Also in 1927, a breakwater was constructed along the western side of the channel leading to the marina, and its northern terminus was marked with a tower identical in shape and style to the new Cayuga Inlet Lighthouse. Known as Cayuga Inlet Breakwater Lighthouse, this tower is appropriately painted red and displays a red light, as it is on the right side of the channel as boaters return to the marina. Cayuga Inlet Lighthouse is painted white and displays a white light.

For a larger map of Cayuga Inlet Lighthouse, click the lighthouse in the above map.

Good views of the lights can also be had from Allan H. Treman State Marine Park, which is accessible from Highway 89 just north of Ithaca. This may be the preferred option as in 2011 there was a breach in the breakwater leading to the light.


A more modern lighthouse, complete with a lantern room, was constructed ten miles north of the Cayuga Inlet Lights in 1998 at Myers Park near Lansing. Known as Myers Point Lighthouse, it was built by volunteers using over 3,000 bricks and was outfitted with a white light in 2002.