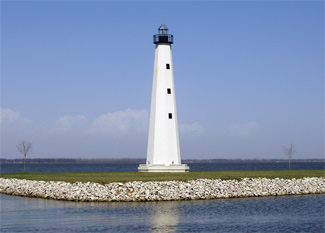 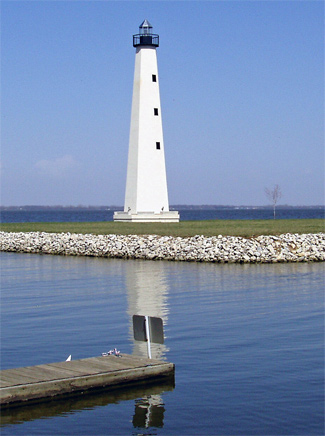 In the late 1990s, Glenn Cobb, manager of Grand Lake St. Marys State Park, mentioned that he would like to see a lighthouse on all four sides of the lake. This sounded like a good idea to Stan Grimm, co-owner of Behms Landing and Restaurant, located on the southern shore of the lake, opposite Northwood Lighthouse. If youve been on the lake, you recognize the need for some bearing of some sort because everything looks the same at night, Grimm said.

After years of planning, Behms Lighthouse, an octagonal, forty-eight-foot-tall lighthouse sitting on a small offshore island, was dedicated on April 19, 2003 to the memory of Stanley Mike Grimm, who was killed in an auto accident on April 25, 1997.

The steel frame for the lighthouse was designed by Mark Severt of St. Marys and assembled by Lefeld Welding before being moved to the island. The lighthouse, which has a diameter of twelve feet at its base and five feet at its top, is covered in stucco-like material and has an interior stairway for servicing the beacon, which was purchased from a company in Texas.

Now just the lakes east shore is missing a lighthouse.

For a larger map of Behm's (Grimm Memorial) Lighthouse, click the lighthouse in the above map.

From Highway 219 on the southern shore of Grand Lake St. Marys, turn north on Behm Road and follow it north to Behm's Landing where you will see Behm Lighthouse.