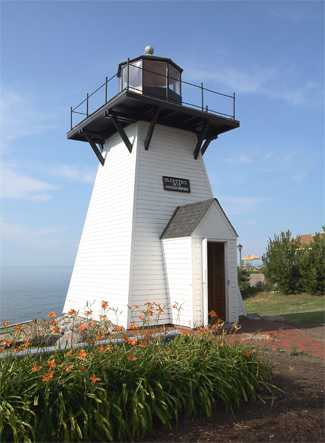 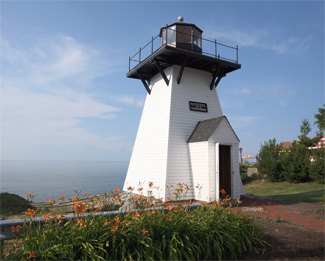 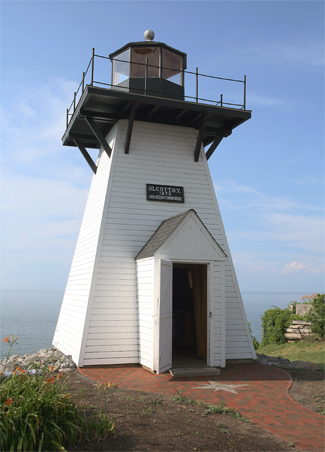 Olcott Harbor is located on the southern shore of Lake Ontario at the mouth of Eighteen Mile Creek, eighteen miles east of the Niagara River. Work on improving the harbor began in 1867, after Congress appropriated $60,000 on March 2nd of that year for constructing two parallel piers from the mouth of the creek out to the eleven-foot contour in Lake Ontario. When finished, the piers extended 880 feet out into the lake, and in 1873 a wooden, square, pyramidal tower was erected on the outer end of the west pier. This lighthouse stood thirty-two-and-a-half feet tall and was topped by a decagonal lantern from which a fixed white light was first shown on the evening of November 1, 1873. The bottom half of the tower was black, and the upper portion white. Richard Mathews was appointed the first keeper of the pierhead light and served in this capacity for thirty-six years, until just a few months before his passing in 1910 at the age of eighty-seven. Known for always wearing his uniform while on duty, Keeper Mathews initially earned an annual salary of $450 and was making $560 toward the end of his career. No dwelling was ever built by the government for the keeper of Olcott Lighthouse.

During Keeper Mathews service, a new lens was installed in the tower in 1881 to replace an inefficient one, and in 1891, the entire elevated walk that led out to the tower was rebuilt. In 1901, a foundation of four concrete piers was built in the stone-filled crib at the outer end of the west pier by Contractor Sherrill, and the lighthouse was anchored to bolts embedded in the concrete. A square iron oil house, with a capacity of 540 gallons, was placed on a concrete foundation on the pier, fifty feet south of the lighthouse, in 1906.

On a Saturday afternoon in late February 1887, John Pilkington went out on Lake Ontario from Wilson to take up his fishing net and was overcome by a fierce storm. A strong west wind drove Pilkington down the lake, and his mother, fearing for his safety, called Keeper Mathews and asked him to light the lamp at Olcott. Mathews complied, and the young man was able to reach Olcott Harbor late that evening, suffering greatly from exposure. A grateful Pilkington credited his mothers call to the keeper with saving his life.

Due to the disproportion between the amount of commerce and the cost of maintenance, Olcott Harbor was abandoned by the federal government in 1896. While no dredging or repairs to the piers were performed after this, the lighthouse remained active. Around 1900, an electric railway was extended from Buffalo to Lockport and then north to Olcott, providing an easy way for the wealthy residents of Buffalo to reach the beaches at Olcott. This dramatically changed the prospects of Olcott Harbor, which had the potential to become a port for the thriving manufacturing city of Lockport, but upgrades to the harbor were still slow in coming.

In 1906, Joseph A. Garant resigned his position as mate aboard the steamer Henry W. Oliver to become assistant keeper at Galloo Island Lighthouse. After three years on the island, Keeper Garant was transferred to Olcott to replace Richard Mathews.

On June 29, 1921, acetylene was introduced as the illuminant in Olcott Lighthouse, changing the lights characteristic from fixed to flashing white and eliminating the need for the daily service of a keeper. Electricity replaced the acetylene gas on November 14, 1929, and the characteristic of the light was changed to fixed red.

On July 1, 1930, the function of Olcott Lighthouse was taken over by a red, steel post mounted fifteen feet from the outer end of the west pier. This position was twenty-six feet north of the old lighthouse, which was removed on July third from the pier that had just received a new concrete cap. The new light had a focal plane of twenty-eight feet above Lake Ontario.

Minus its lantern room, which was removed for use elsewhere, the old wooden lighthouse was relocated to the grounds of the Olcott Yacht Club at the shore end of the west pier. Under the direction of Harry A. Shaeffer, a club official, the lighthouse was refurbished and a new steel and glass light chamber was built and placed atop the tower, which the club planned to use as an observation post during its regattas. The lighthouse remained standing until 1963, when the club decided the tower could not be restored and dismantled it.

The story of Olcott Lighthouse would have ended there if not for a group of citizens, known as the Olcott Lighthouse Society, who were determined to bring a lighthouse back to the community. Jump-started by a $1,000 donation from the local Lions Club, the group was able to raise roughly $6,000, and in 2003 work on an accurate, full-scale reproduction began. As no blueprints or architectural drawings of the original lighthouse were available, a collection of historic photographs was used to develop plans for the replica lighthouse. The tower was constructed of white pine in a Dutch Lap style of overlapping boards.

Olcott, once a popular lakeside resort, is experiencing a rebirth, and the lighthouse was not the only historic icon to return to the city in 2003. A separate group had spent three years raising funds to purchase and refurbish a 1928 Herschell-Spillman carousel to replace one that was part of the former Olcott Amusement Park. Besides the carousel, vintage rocket-ship, boat, car, and fighter-plane rides were also operational in 2004 as part of the childrens Olcott Beach Carousel Park. Rides on the carousel are only a quarter and are enjoyed both by children and the young at heart.

Located at the intersection of Ontario Street and Lockport-Olcott Road along the waterfront in Olcott.
Latitude: 43.33874, Longitude: -78.71512

For a larger map of Olcott (Replica) Lighthouse, click the lighthouse in the above map.

From the intersection of Highway 18 and Highway 78 just south of Olcott, turn north on Highway 78 (Lockport-Olcott Road) and continue until it ends where you will see the lighthouse. The lighthouse is open to the public Thursday through Sunday from noon to 6 p.m.

The lighthouse is owned by the Town of Olcott. Grounds/tower open.