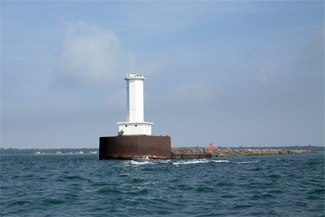 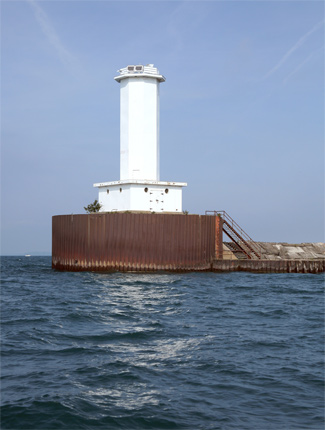 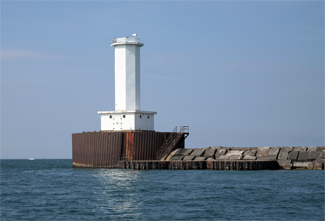 In its early days as a port of entry, Buffalos experience with lighthouses was to build them and then begin to ponder replacing them within a few years. This was true of the initial 1818 tower, which was quickly obscured by the smoke of the village and resulted in an appropriation for a better beacon by 1826. The replacement tower of 1833, while still standing to this day, was quickly judged by some as merely a good stationary light, but one which must be augmented by a more powerful beacon. The reason these two towers failed to provide for Buffalos maritime needs was the explosive growth of the city on the heels of the opening of the Erie Canal in 1825. The waterway had its western terminus in Buffalo, which led to a fourfold increase in the citys population by 1832.

In 1838, Lieutenant Charles T. Platt noted in an inspection report that while Buffalos stone tower was currently adequate for the bustling ship traffic, what was a problem was the insufficiency of the present entrance to the harbor. The report describes how Buffalos harbor was an elongated shape, being defined by the narrow but deep Buffalo Creek. The 1833 tower was erected on a substantial pier near the harbors entrance, but at this juncture the crowd of vessels was noted to be of serious inconvenience.

Despite these noted deficiencies, it wasn't until 1868 that definitive action was taken. In this year, work commenced on a planned 4,000-foot-long, detached breakwater located 2,500 feet out in the lake. This structures purpose was to increase the size of the harbor and allow ships more room for docking and maneuvering. In 1870, a $30,000 appropriation was made for two lights to be placed near the new breakwaters extremities. As the breakwater would be difficult to reach in certain seasons, it was felt that the light near the northern end should include integrated quarters for the keepers. However, the small appropriation would not admit of a very elaborate structure, and even this would have to be made of timber.

On May 18, 1871, a forty-foot-square crib was sunk twenty feet behind, and twenty-three feet from the northern end of the breakwater. After the framing was extended to the surface of the water, work was halted until June 15 to permit the crib to settle into the lake bottom, after which six extra courses were added. Work on the lighthouse was suspended on September 9 and was not continued until the following spring due to the continued and irregular settling of the pier.

Once stable, the pier was elevated twelve feet above the water level, and the superstructure was supported by heavy upright oak timbers securely framed into the pier, the oak timber being firmly held by adjustable wrought iron rods. The lighthouse consisted of a square keepers quarters, with a short octagonal tower rising from the center of its hipped roof. The stations light was produced by a fixed, fourth-order Fresnel lens, at a focal plane of thirty-seven feet above the lake. A fog bell, positioned twenty-four feet above the water on the western side of the lighthouse, was struck three times in rapid succession every thirty seconds as needed. Underscoring the importance of the new breakwater light, this fog bell was transferred from the old 1833 stone tower now sitting a fair distance from the harbor entrance.

The Annual Report of the Lighthouse Board of 1890, recorded that the timbers and foundation beneath both the fog bell and the keepers quarters were replaced. Also noted, was that the fog bell was ineffective and needed to be replaced by a steam fog signal at an estimated cost of $4,300. After repeated requests, funding was made available in August 1892, and a ten-inch, steam-powered fog whistle was completed at the station and ready for operation on September 30, 1893. To make room for the fog signal house, the lighthouse was moved from the center of the crib to its northwest corner. The fog signal originally made a three-second blast every thirty seconds, but in 1895 this was changed to a single blast per minute after the signal was deemed an annoyance to the people of Buffalo. In addition, a concave structure constructed somewhat on the principle of a parabolic reflector was placed behind the whistle to divert the sound waves from the city and toward the lake.

According to the 1899 Annual Report of the Lighthouse Board, the towers lantern was raised twelve feet to provide greater visibility. At this time, a watchroom was added below the lantern, and the oil room and fog bell machinery were relocated beneath the keepers quarters. A new smokestack was also supplied for the fog signal boilers, which were themselves replaced in 1900. Despite these improvements, the breakwater station was subjected to numerous collisions during these years, including an incident with a tugboat in 1899, a barge in 1900, a freighter in 1909, and the steamer Norseman in 1910.

In 1908, the Lighthouse Board reported that the fog signal house was settling, and the lighthouse was leaking and too much decayed for economical repairs. An appropriation was therefore recommended for rebuilding the station. This request was repeated annually until Congress allocated $60,000 on March 4, 1911 for rebuilding the Buffalo Breakwater North End Light Station.

The old lighthouse was demolished, and its crib and foundation were removed to a level four feet below the surface of the lake. A crane was then used to place concrete blocks in the form of a hollow square and then additional blocks were placed inside to form small pockets. These pockets were then filled with cement until a solid foundation was created. A tall cement pier was then built atop the foundation to provide an elevated base for the new lighthouse.

By July 1913, the work was around sixty percent complete, with the brickwork for the superstructure having been laid up to the second story and $16,790.79 having been spent. To assist mariners during the construction, a a temporary lantern and fog bell were installed atop the nearby breakwater. The contractors tasks were completed on April 25, 1914, and the new lighthouses fog signal was activated on July 15, and its third-order Fresnel lens, relocated from the 1833 Buffalo Lighthouse, followed suit a month later. The lighthouses fog signal was the first installation of a diaphone in the United States.

Rectangular in shape, the new lighthouse was constructed of vitrified cream colored brick, with trim of Westerly granite, and outfitted with a tile roof, and gutters and flashings made of tin-coated copper. Three bedrooms were located on the second floor along with the living room, pantry, and a lavatory. The first story contained the storeroom, engine room, office, and an additional lavatory. The interior walls of the lighthouse were finished with enameled brick. The floors in the bathroom and halls were ceramic tile, while the flooring for the living room, office, and bedrooms was maple.

The stations four-panel Fresnel lens turned on a combination mercury pot and ball bearing support, producing a white flash every five seconds. The light, whose source was an oil vapor lamp, had a strength of 180,000 candlepower and a range of 15 ¾ miles. Twin, twenty-two horsepower engines ran the air compressor for the fog signal. A stored air reserve could be employed both for starting the engines and for operating the signal itself, if there were a delay in powering up the compressors. A pump that drew from either the lake or the cistern in the cellar furnished water for the station. The cellar also held a coal bin, oil tanks, air receivers, and a paint room.

A year after the new lighthouse and its diaphone fog signal were placed in operation, a sound deflector, as described in the following paragraph from the Lighthouse Service Bulletin was placed around the fog trumpets:

A sound deflector was installed at the Buffalo Light Station, N.Y., to diminish the sound from the fog signal from spreading back over the city of Buffalo. The deflector is about 14 feet in diameter. As first installed it consisted only of steel plating, saucer shaped, placed immediately back of the horns and securely fastened to the building structure. With a view to reducing the vibration, it was afterwards lined on the Lake face with asbestos board. For sound-deadening purposes, the 4-inch space between the asbestos lining and the steel was filled with mineral wool, after proper treatment of metal surfaces, to minimize or prevent corrosion of the steel from the sulphur impurities of the mineral wool. The deflector was proved effective in minimizing the sound of the signal in the city.

A submarine electric cable was laid in a trench between the breakwater and the nearby south pier in 1921, allowing the light and fog signal compressors to be electrified the following year. After the cable was damaged by vessels anchoring near the station, a green light was placed at a point 1,200 feet south of the north end of the breakwater, and vessels were required to anchor south of the light.

A radiobeacon was established at the breakwater station on April 15, 1927, and in 1929, the exterior walls of the lighthouse were covered with steel.

In July 1958, disaster befell the Buffalo Harbor Breakwater Lighthouse when the giant Great Lakes freighter Frontenac set too wide a course out of the Buffalo River. George Harrington, who was tending the light at the time, raced down three flights of stairs and scampered over to the breakwater, when he realized that even dropping its anchors could not prevent the Frontenac from striking the station. The lighthouse was driven backwards almost twenty feet and was left with a list of fifteen degrees. A temporary light tower had to be hastily erected to replace the crippled lighthouse. Newspapers throughout the country ran a picture of the leaning lighthouse with the caption: Lighthouse Looks 'lit'.

In 1961, a new light structure, a white, seventy-one-foot automated tower, was built at the end of a breakwater located even farther out in the lake During that same year, the Pittsburgh-based American Demolition Company tore down the 1914 Buffalo Breakwater Lighthouse, that had become known as Buffalos leaning lighthouse. The only remnant of the old breakwater station that marked the harbor entrance is an old metal oil house located a short distance from a modern, solar-powered beacon.

For a larger map of Buffalo Harbor Lighthouse, click the lighthouse in the above map.

This lighthouse is best viewed from the water, but can be seen from Buffalo Main Lighthouse.