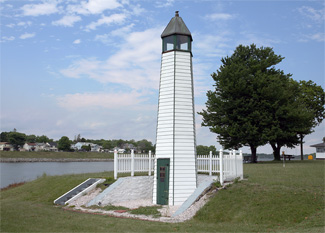 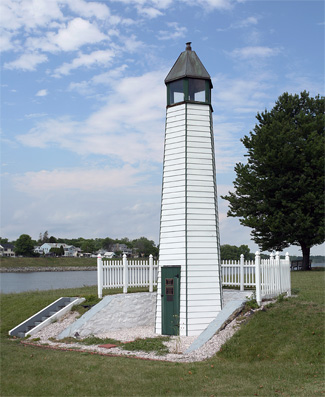 Bethel Bridge Lighthouse was one of about a half-dozen beacons situated at various points along the Chesapeake and Delaware (C&D) Canal to warn ships of the numerous locks and bridges along the fourteen-mile-long channel. Originally equipped with an oil lamp, the thirty-foot wooden tower exhibited a red signal.

The C&D Canals history extends far back into pre-colonial days when Dutch cartographer and envoy, Augustine Herman, first proposed digging the waterway across a slender piece of land in the mid-1600s to link two important bodies of water, the Chesapeake Bay and the Delaware River. The economic implications of the canal were apparent early on, for it would cut the travel distance from Philadelphia to Baltimore by almost 300 miles.

This grand idea was slow to become a reality, however, and the land in question was explored by surveys a number of times over the next century and a half. In 1788, a number of prominent business leaders, including the influential Philadelphia figures of Benjamin Franklin and Benjamin Rush, promoted the plan. Decrees by the Pennsylvania, Maryland and Delaware state houses in 1802 led to the incorporation of the C&D Canal Company. The new firm undertook more surveys and began construction in 1804. The first version of the canal was complex, involving fourteen locks that would connect the Elk River in Maryland with the Christina River in Delaware. The C&D Canal company grossly underestimated the resources needed to complete the project, however, and had to stop construction in 1806 when they ran out of money.

It wasnt until 1822 that a second incarnation of the C&D Canal Company was formed, and it was quickly determined that $2 million would be required to finish the job. Stock purchases by Pennsylvania, Maryland and Delaware, and funding from the federal government totaled $625,000, and the rest was raised by a public offering.

The old canal route was scrapped, and between 1823-24 the U.S. Army Corps of Engineers put two senior engineering officers at the disposal of the canal company. They, along with two civilian professionals, determined that a new four-lock route between Delaware City and Marylands Elk River was the best way to go. Work began in April 1824 and involved 2,600 laborers. These men worked with simple pick and shovel for only seventy-five cents a day, and were often plagued with mudslides due to the swampy consistency of the land. They finished their task in 1829, at a cost of nearly $2.5 million.

The canal was fourteen miles in length and provided a channel that was ten feet deep and thirty-six feet wide. Four wooden bridges traversed the canal, including a covered one at Summit, Delaware, and three swing bridges. One of the swinging bridges was the Bethel Bridge, the site of the lighthouse. The waterway had two locks in Delaware, at Delaware City and St. Georges, and two in Maryland, both at Chesapeake City. All of these locks, which were originally 100 feet long and twenty-two feet wide, were marked with lighthouses similar to the Bethel Bridge beacon.

The venture proved very profitable at first, as vessels carrying all manner of items including lumber, cotton, coal, grain, and passengers were pulled along the channel by teams of horses and mules. The year 1872 saw a peak in cargo tonnage, when over 1.3 million tons of goods were brought through the waterway.

Inevitably there were problems with such a complex transportation arrangement. From the beginning, the use of locks caused water to be lost from the canals higher portion to its lower. Various measures were taken to combat this issue, such as a steam operated pump purchased in 1837. Between 1852-54, two steam engines and a wooden waterwheel were placed at the Chesapeake City pumphouse (now home to the Canal Museum). This wheel had twelve troughs to scoop up water and deposit it at the higher canal level, and measured thirty-nine feet in diameter and ten feet across. The 150-horsepower steam engines burned through eight tons of coal each day and were capable of driving the water wheel to elevate 170 tons of water per minute.

Another persistent difficulty with the canal was the ever-increasing size of ships. Steam technology made possible larger boats that possessed a deeper draft, and these could not transit the shallow locks. For this reason, the canal missed out on a lot of ship traffic. The substantial operating and repair cost cut into the companys bottom line as it saw many vessels bypass the canal.

Deepening and widening the existing waterway would have seemed the logical way to solve this problem, but instead there were concerted efforts to find an entirely new route. Though numerous companies and committees were formed to study alternate paths, they could not agree on a solution. In 1906, Teddy Roosevelt decided to take a fresh look at the C&D Canal, and he established a committee to evaluate the possibility of converting the lock-laden canal to a free and open waterway.

Roosevelts suggestion ultimately led to the federal government buying the canal in 1919 for $2.5 million. The six existing bridges and railroad span were replaced by four vertical lift spans and a new bridge for rail traffic. Initially, the Army Corps of Engineers at Wilmington, Delaware was charged with operating and upgrading the canal. By 1927, they had moved the eastern canal entrance at Delaware City several miles south to Reedy Point, Delaware, enlarged the channel, and made the canal a completely sea-level affair. All this was accomplished at a cost of $10 million.

In 1933, the canal was reassigned to the Philadelphia Army Engineers, and they undertook the improvements that have given the C&D Canal its modern dimensions. From 1935-38, $13 million was spent on expanding the channel to 27 feet deep and 250 feet wide. Throughout the 1960s and 70s, the waterway was further extended to 450 feet wide and 35 feet deep. This change was enacted partially in response to the number of ships that collided with bridges along the canal; there were eight such incidents between 1938 and 1950. New bridges were constructed as the canal dimensions increased, including tall highway spans for car and truck traffic at St. Georges and Chesapeake City.

The canal today is a busy, electronically monitored conduit used for ferrying 40% of the cargo traffic into and out of Baltimore. Tankers, barges, tugboats and cargo ships join numerous private recreational boats in this thriving waterway. The C&D Canal has produced a strong job market for U.S. Coast Guard certified pilots, which are required to be aboard any vessel involved in foreign trade. A ship entering the canal from the east will usually have a Delaware River pilot board and guide it through the Delaware Bay. At Chesapeake City, a Maryland pilot skilled in the nuances of the Chesapeake Bay will then take over. The two pilots have an interesting way of embarking and disembarking at Chesapeake City: a small skiff comes alongside a ship, and the pilots enter and exit via the gangway or Jacobs ladder while the cargo vessel continues to plow along.

Besides being one of only two U.S. sea-level canals of commercial importance, the C&D is also on the National Register of Historic Places. A Canal Museum is operated by the Army Corps of Engineers at the old pumphouse in Chesapeake City to interpret the waterway that has been designated a Mechanical Engineering Landmark. The museum is free and contains the original waterwheel and pumping engines installed in the 1800s. Also included are interactive videos on the history of the canal, as well as a closed-circuit TV link from which visitors can ascertain the precise position of ships traversing the channel.

Near the museum is a thirty-foot wooden replica of the original Bethel Bridge Lighthouse, which was rendered unnecessary when the C&D Canal was upgraded in 1927. The modern lighthouse was donated by the Chesapeake City Lions Club in 1996.

For a larger map of Bethel Bridge Lighthouse, click the lighthouse in the above map.

From Highway 213 in Chesapeake City, just south of the bridge over the Chesapeake and Delaware Canal, exit and follow George Street to the waterfront area. Turn right onto Second Street and follow it along the mooring basin, and then turn left onto Bethel Road, which leads to a parking area near the lighthouse.