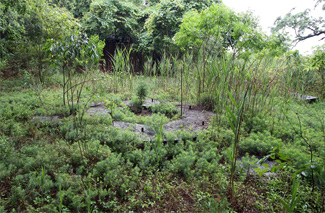 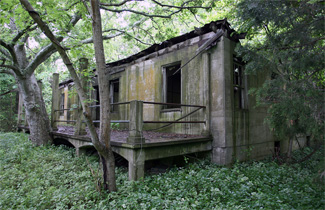 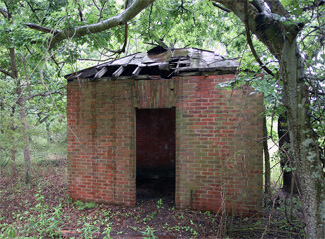 Situated roughly two miles north of Lewes, at the end of Pilottown Road and just beyond a modern Coast Guard station, are the remains of Delaware Breakwater Rear Range Lighthouse. Known to locals as Green Hill Light, though the land is elevated just a few feet above the surrounding marsh and would hardly qualify as a hill even to the most imaginative, the beacon was abandoned decades ago. Years of untamed growth by the surrounding vegetation keeps the site hidden to the casual observer and has caused it to be all but forgotten. Thankfully, a few determined individuals hope to changes this situation, and plans have been proposed to incorporate the property into a greenway. On June 16, 1880, Congress appropriated $20,000 for the erection of a tower near Lewes to serve as a rear range light to the existing lighthouse on the west end of Delaware Breakwater. The breakwater was built to provide a safe harbor for vessels transiting the Atlantic Coast or Delaware Bay in times of storm. When completed, it was the second longest stone breakwater in the world  only one in France was longer. Construction on the breakwater began in 1829 and would span more than four decades, including the turbulent years of the Civil War. Originally intended to have a length of 3,600 feet, the breakwater ended up being 2,586 feet long, although 1,350 feet to the west of the structure was a 1,400-foot-long stone breakwater that served as an icebreaker.

The lighthouse built on the west end of the breakwater in 1849 was not its first, as a light had been exhibited starting around 1838 from the roof of the dwelling constructed on the breakwater to house the projects superintendent. The 1849 lighthouse was situated adjacent to the superintendents dwelling and consisted of a one-and-a-half-story dwelling with a lantern room centered atop its pitched roof. Brick arches elevated the lighthouse, allowing the sea to pass over the breakwater and under the lighthouse. Six lamps set in fourteen-inch spherical reflectors originally produced the light, but a Fresnel lens manufactured by Sautter & Cie was later installed.

Such was the state of the lighthouse on the west end of Delaware Breakwater when construction began on its onshore companion located just over three miles to the southwest. A ten-acre site at Green Hill was purchased in December 1880, and three months later the Phoenix Iron Company of Trenton, New Jersey was awarded a contract to fabricate the iron tower, while John C. Kelley of Philadelphia was awarded a contract to construct the keepers dwelling, build the necessary stone foundations, and line the tower.

Work progressed rapidly on the station for the tower was completed and accepted on August 6, 1881, and the dwelling and lining of the tower followed suit on September 8. The tower stood 100 feet tall from its base to the focal plane of the lantern room, while the dwelling was a two-story affair most likely built of wood. Thomas Wright was the first keeper of Delaware Breakwater Rear Range Lighthouse, and he activated the light on November 1, 1881 in accordance with a published notice to mariners. Paired with the light on the west end of Delaware Breakwater, the rear range light helped define a line that guided mariners safely into Delaware Bay.

On October 1, 1884, the characteristic of the rear light was changed from red to white to prevent it from interfering with the red sector in Cape Henlopen Light. A dark angle of about ninety degrees was added to the light in November 1887 to mark a dangerous shoal known as The Shears. In 1899, the southerly edge of the dark sector was shifted south to cover the entire site of the Harbor of Refuge Breakwater that was being built near The Shears.

The Annual Report of the Lighthouse Board for 1898 mentions the construction of the stations brick oil house, which remains standing today, along with the addition of a kitchen to the dwelling and the installation of a galvanized iron hand rail in the towers stairway. The grounds received a major sprucing up in 1901 when 600 ornamental trees and shrubs were planted and about 650 square feet of brick walkways, with brick-on-end borders, were laid out between the dwelling, tower, oil house, and barn.

A second dwelling was completed at the rear range station in February 1910. The need for a second assistant was probably justified by this keeper spending a portion of his time working at the Lighthouse Depot in Lewes. Being built of concrete, this dwelling was meant to last. A few years later, the original dwelling was sold, relocated, used as housing for workers at a chicken farm, and then burned to the ground around 1970.

The buildup of sand at the tip of Cape Henlopen led to Delaware Breakwater Range being discontinued in 1918. The lens from the rear tower was removed and shipped to San Francisco for use in that area, and the next year another lighthouse district expressed interest in using the iron structure in Florida. The tower was disassembled in August and September of 1919 by William Rodney Robinson, but funds for relocating the lighthouse were not immediately available, so the move was delayed until adequate money was obtained in 1921. At that time, the pieces of the tower were shipped on a train from Lewes to Miami, and the tower eventually made its way to Floridas Gulf Coast where it was re-erected in 1927 on Gasparilla Island. The transplanted tower remains active to this day, helping guide vessels into Port Boca Grande.

A preliminary plan with four possible levels of commitment was introduced by the Lewes Greenways and Trails Committee in September 2002 for restoring and interpreting the site of Delaware Breakwater Rear Range Lighthouse. The first level called for the constructing a trail, erecting signage, and leaving just the shell of the concrete dwelling for a cost of $124,000. Level two included level one but would restore the shells of the oil house and dwelling and cost $250,000. The third level added the rebuilding of the tower at a cost of $642,400, while level four included the complete restoration of the keepers dwelling for a total cost of $946,000.

The committee reportedly opted for an enhanced version of level two that would cost $294,000, but during a visit to the site in 2006 it was apparent that no work has started. (Conditions had not changed in 2013 according to another visitor.) Hopefully the project has just been delayed and Lewes will soon have yet another lighthouse destination to add to its already remarkable list.

For a larger map of Delaware Breakwater Rear Range (Green Hill) Lighthouse, click the lighthouse in the above map.

From Business Route 9 (Savannah Road) in Lewes on the south side of the bridge crossing the Lewes-Rehoboth Canal, turn west on Front Street. After a couple of blocks, Front Street will become Pilottown Road. Follow Pilottown Road until you cross over Canary Creek, where you will see a Coast Guard station on your right. Park here and walk a little farther down Pilottown Road, and you should see an old road branching off to your left (there should be an osprey stand just a short distance down this old road). Follow this road into the trees, and you will see the remains of Green Hill Lighthouse. A visitor to this site in 2017 reported that the road is overgrown, and when he asked some guys at the nearby marina about getting to the old site, he was told he would be covered with so many tick, chigger and mosquito bits that he would be miserable for a week. Better to go in the winter time after a freeze has killed all the bugs.

The remains are owned by the City of Lewes. Grounds open.


We visited this station on an overcast day after a night of abundant rainfall. Traipsing through the thick undergrowth to find the foundation of the tower and to examine the other remaining structures left us soaked to the knees. A quick trip to the nearest Payless had to be added to our itinerary to acquire some dry footwear for our flight back home.