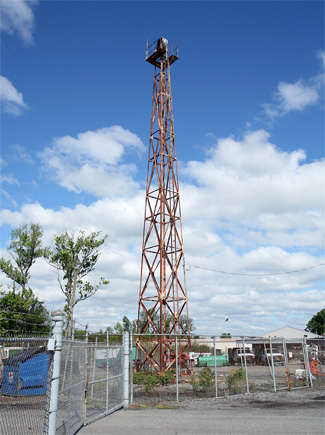 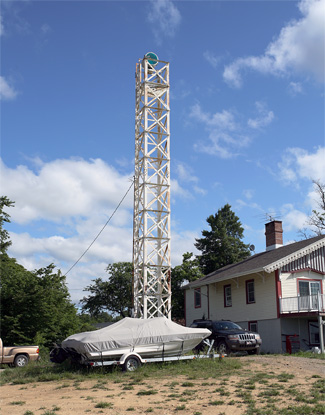 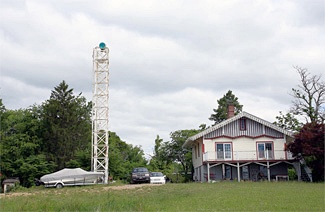 New Castle Range Lights, named after the nearest town (New Castle, Delaware), were established to help mariners avoid Bulkhead Shoal, located in the Delaware River just north of Pea Patch Island. Before constructing the lights, the government acquired a 4.07-acre parcel along the western bank of the river from L. Taylor Dickson for $6,000 and a one-acre parcel, located a half-mile inland, from Joseph I. Taggert for $2,500. Lieutenant Colonel William F. Raynolds, of the U.S. Army Corps of Engineers, was responsible for erecting the buildings for both the front and rear lights. The Description of the Lighthouse Sites of the Fourth Lighthouse District, printed in 1878, provides the following information on the keepers dwelling at the front range.

The dwelling is two stories in height, with tin roof, weather-boarded on outside and lathed and plastered inside. The first story is of brick, cement-washed on outside, and is divided into four rooms, one of which is used as a kitchen, one as cellar, containing cistern of a capacity of 2,000 gallons, the others as work-room and store-room. The second story is divided into four rooms, with porch on front and side, level with second floor. Outside steps lead from the porch to the ground, the entrance to the lantern room being from this porch.

A ten-foot-square tower with a height of thirty-eight feet was attached to the southern end of the dwelling. The first and third stories of the tower were originally used as storerooms, while the front range light was displayed from a bay window on the second story. A fancy, iron finial, standing three feet tall, capped off this rather unique lighthouse.

At the rear range, the light was displayed from atop a square tower, that was attached to the keepers dwelling and stood fifty feet tall from its base to the focal plane of the light. The dwelling was described as being two stories in height, with shingle roof, double weather-boarded on outside and lathed and plastered on inside. The first story is divided into three rooms, with hall and stairway to second floor in the tower, and stairway to cellar out of kitchen. The cellar contained a cistern for storing the rainwater collected from the roof of the dwelling.

The front and rear lights, both of which consisted of a twenty-four-inch range lens, a silvered reflector, and a Funck lamp, were first exhibited on November 15, 1876. A small gallery was built in front of the front towers lantern in 1880 to facilitate the cleaning of the outside surface of the glass. A large clump of trees that limited the rage of visibility of the rear light was cut down in 1884 with the land-owners consent, and the following years wells were sunk at both the front and rear light to provide an ample supply of drinking water. In 1886, the tower for the front light was detached from the keepers dwelling and moved thirty feet west so the range line would be farther removed from shoals off Finns Point. An elevated, enclosed passageway was built at this time to connect the tower and dwelling, and a detached frame oil house was erected.

The characteristic of the front range light was changed in October 1894 from fixed white, to fixed white during periods of 2 seconds, separated by eclipses of 1 seconds duration. A cylindrical sleeve, raised and lowered by a clockwork mechanism at prescribed intervals, produced the eclipsing effect.

The land at the front and rear stations was described respectively as a fine variety of potters clay and as being of a clayey nature, but this did not stop Keeper Alexander Jarrell from attempting to cultivate crops at the front light. As recorded in the station logbook on April 17, 1877, Jarrell went to New Castle to see about manure, found that none could be had at any price. The Annual Report of the Lighthouse Board for 1900 noted that 800 square feet of sod had been placed on the grounds of the front range station and that 96 ornamental trees and shrubs had been planted. At the same time, the rear station received 76 ornamental trees and shrubs. Most of these plantings seemed to have survived as seven years later a report on the front station noted that about the grounds were 44 Norway spruces, 2 arborvitae, 16 maples and 9 cherry trees, poplars, and California privets.

Besides his own comings and goings, Keeper Jarrell also made notes on river traffic and shipwrecks near his station as exemplified by the following entries in the station logbook:

From May 3, 1898 to July 26, 1898, New Castle Range Lights were temporarily discontinued, likely as a precautionary measure during the Spanish-American War.

The Lighthouse Service Bulletin for October 1923 provides the following account of the electrification of the front range light:

Electricity has recently been installed at New Castle Range Front Light Station, Del., with satisfactory results. The plant consists of a small 1 ¼-kilowatt generator, with a 160-ampere, 32-volt storage battery, located in the lower story of the tower, and supplies sufficient current for the two sets of illuminating apparatus in the tower, and for lighting the keepers dwelling. The keeper operates the plant for about 2 ½ hours per day in charging batteries and uses about 1 5/8 gallons of commercial kerosene and a small quantity of gasoline when starting and stopping the engine. There are two installations of illuminating apparatus in the tower, as stated above, a locomotive headlight equipped with a 100-watt concentrated G 25 electric light in the upper part of the tower marking the range, and a standard lens lantern equipped with a similar type of electric lamp, located in a lower story below the locomotive headlight, lighting four sets of sectors, two each way, marking obstructions and safe water in the vicinity of New Castle and Delaware City and along a part of Bulkhead Shoal Channel. A careful estimate places the cost of current per kilowatt hour at 10.29 cents and the cost per day at 27.92 cents. Previous to the installation of the generator, kerosene was in use at the station at a cost of 33.35 cents per day. There is a saving of about 20 per cent in the illuminant, with a great increase in candlepower of the range light and in the sectors mentioned above.

Following the automation of New Castle Front Range Lighthouse sometime in the early 1930s, Arthur W. Hopkins, the last keeper of the light, continued to live in the dwelling rent-free as a custodian until at least 1940. Lidie and Bill Brown occupied the dwelling during World War II, and when the Coast Guard put the property on the auction block in 1953, the Browns were the high bidders at $5,000, an amount less than what the government had paid decades before just for the land.

In the 1960s, the Coast Guard tore down the original front tower and replaced it with an automated steel tower, which displays its light from fifty-six feet above mean high water. Since the Browns purchased the property, five generations of the family have occupied the dwelling. The Browns daughter Jeanette moved in with her husband William Cross shortly after the purchase, and in 1985, the Cross daughter, Jeanne Butler, along with her husband Wayne, moved into the dwelling to help care for her parents. The Butlers have completed a two-story addition to the back of the dwelling and built a deck on the front that resembles an original one. In 2007, the Butlers shared the commodious residence with their son and his family. Besides the dwelling, a historic well, privy, and brick oil house remain standing on the property.

After New Castle Rear Range Lighthouse was replaced by an automated beacon atop a 110-foot, skeleton tower, the combination tower and dwelling was declared excess and sold to the public. The new owner of the lighthouse turned the handsome structure into a rental property. Sometime later, the lighthouse also served as a meeting hall. Following years of neglect and a fire that reportedly damaged the buildings roof, the lighthouse was condemned. The owner hired the Goodwill Fire Company of New Castle to burn the structure to the ground in November 1982.

Though the original elegant towers have been gone for years, modern New Castle Range Lights continue to mark a clear channel for vessels transiting this area of the Delaware River.

For a larger map of New Castle Range Lighthouse, click the lighthouse in the above map.

From New Castle, drive south on Highway 9 for just under two miles to Grantham Lane. Turning right on Grantham Lane will take you to the tower at the site of the former rear range light. To reach the front range light, turn left on Grantham Lane from Highway 9, then make a right turn and follow the road through an industrial site. Please note that New Castle Front Range Light is adjacent to a private residence.

The towers are owned by the Coast Guard but surrounded by private property. Grounds/dwelling/tower closed.


As seen in this photograph, the front range light was located adjacent to Deemer Beach, which besides having a bathing beach also offered a sky-swing, dance hall, and picnic area.