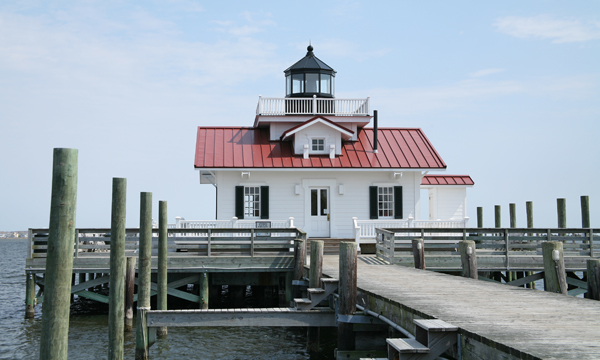 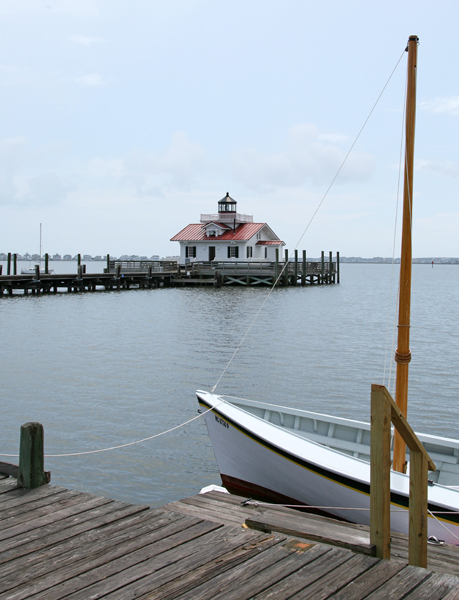 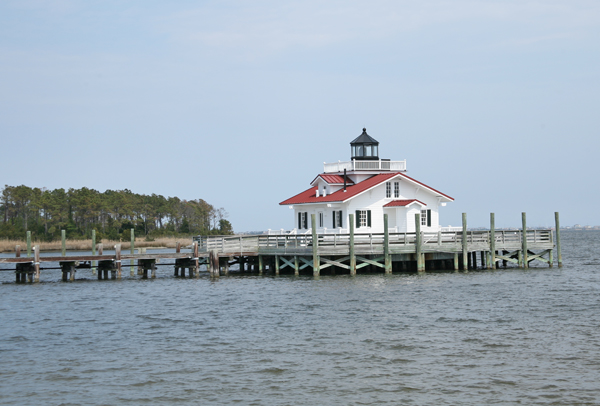 In the late 1800s, there was a system of twelve screwpile lighthouses that helped mariners navigate the complex system of sounds and waterways that lie between the Outer Banks and the North Carolina mainland. Of these, not one remains on its original station, and only one is still intact. Fortunately, a replica of one of these important beacons, the Roanoke Marshes Lighthouse, has been reconstructed and placed atop pilings just offshore from the town of Manteo on Roanoke Island, where it is easily accessible via a short pier. The actual Roanoke Marshes Lighthouse was not reached so easily as it stood offshore between the southern end of Roanoke Island and the mainland, where it served to mark the southern entrance to Croatan Sound from Pamlico Sound.

The replica lighthouse is actually the fourth to carry the name of Roanoke Marshes, as three different structures were used at the station in Croatan Sound. The first lighthouse was built by Lucius Lyon of Michigan and went into service in 1831 with Littlejohn Pugh as its keeper. After just eight years, the tower and dwelling were abandoned as they were in need of extensive repairs. In addition, a Mr. Van Pelt claimed title to the land on which the lighthouse had been constructed and demanded an exorbitant amount for it.

In 1853, L.D. Starke, Superintendent of Lights at Elizabeth City, sent a petition for a lighthouse at Roanoke Marshes to the Lighthouse Board along with a letter stating that the site of the first light could now be purchased at a moderate price. Congress appropriated $10,000 for the lighthouse on August 3, 1854, but work on it did not commence until 1857. This second incarnation consisted of a hexagonal dwelling surmounted by a lantern room and supported by seven piles that were anchored in the seabed. Joseph M. Daniel and Stephen B. Casey were respectively the first principal and assistant keeper at the second Roanoke Marshes Lighthouse. On April 15, 1858, they lit the lamp inside the stations fourth-order Fresnel lens for the first time.

Roanoke Marshes Lighthouse was taken out of service by Confederates shortly after the outbreak of the Civil War, but the light was reactivated in 1863. By 1872, the marsh beneath the lighthouse had washed away, leaving the structure standing in ten feet of water. The wooden support piles had been covered by cast-iron sleeves where they were originally exposed to water, but erosion left the wooden piles exposed and vulnerable to shipworms. A trio of coppered piles was placed beneath each corner of the lighthouse to provide additional support, but the Lighthouse Board felt it would be cheaper to build a new lighthouse than to render the current one safe.

Congress appropriated $15,000 on March 3, 1875 for a third Roanoke Marshes Lighthouse, but due to the difficulties of building on the exposed site, work had to be postponed until an additional $5,000 was provided in July 1876. Construction of the replacement lighthouse, which would serve as the model for the replica lighthouse, began in October 1877 at a location 200 feet to the south-southeast.

The third lighthouse was a white, square structure, supported by seven screw piles. When the lighthouse was finished in November 1877, the lens, fog bell machinery, and boats were transferred from the old lighthouse, which was then dismantled. On July 30, 1891, the characteristic of the light was changed from fixed red to fixed white with a red sector to mark obstructions in Croatan Sound. This change was effected by installing plates of ruby glass in the lantern room.

The stations fog bell, which was badly cracked, was replaced in 1899. On July 1, 1901, a blower siren, operated by an oil engine, was established at the station. The siren averaged about 200 hours of operation each year while consuming around sixty gallons of mineral oil.

On April 14, 1903, thirty-four-year-old Assistant Keeper George Scarborough was returning to the lighthouse from home in a small rowboat, when he was overtaken by a sudden wind and rain squall that lasted about twenty minutes. When the skies cleared, the rowboat was seen upside down about a mile from shore. Efforts to recover the keepers body proved fruitless. Some people had reportedly urged him to not attempt the journey, but Scarborough insisted on venturing out.

In January 1918, during the final year of World War I, the waters around Roanoke Marshes Lighthouse froze, making it impossible for supplies to be delivered to the station for a number of weeks. Knowing that Keeper Charles Pugh might be running low on supplies, William B. Gray, a cook in the U.S. Navy reserve, bravely ventured out to the lighthouse with supplies in a ship to which runners had been attached. Secretary of the Navy Josephus Daniels commended William Gray for his bravery and skill in making the trip.

Charles Pugh served as assistant keeper of the lighthouse from 1898 to 1901, and then returned in 1907 to replace Ephraim H. Riggs as head keeper. In his many years at the station, Keeper Pugh kept a watchful eye on the waters surrounding the lighthouse and was repeatedly recognized for his efforts in helping mariners in distress. In 1913, he piloted the disabled yacht Captain Lew II into harbor, and in 1918, he helped free the steamer E.F. Daniels from ice and towed it to shore. In 1920, Keeper Pugh transported those aboard the U.S. naval seaplane NC-2 to shore so they could find lodging and then returned them to the seaplane the following morning.

Unaka B. Jennette minded a light on Cape Hatteras for twenty years. The first seventeen were at Cape Hatteras Lighthouse, and the last three were at a skeleton tower that was constructed nearby when Cape Hatteras Lighthouse was threatened by erosion. When the Coast Guard assumed control of all U.S. lighthouses in 1939, Jennette chose to remain a civilian employee and was transferred at that time from Cape Hatteras to Roanoke Marshes Lighthouse. Keeper Jennette served at the screwpile light for four years until his retirement in 1943.

When Roanoke Marshes Lighthouse was decommissioned by the Coast Guard in 1955, it was suggested that the town of Manteo purchase the lighthouse and relocate it to the Manteo waterfront. Before the town acted, a private citizen named Elijah Tate acquired the lighthouse along with two other screwpile lighthouses in the area. The structure was cut from its foundation and placed on a barge to be transported to its new home. Not far from its original site, rough seas caused the lighthouse to topple off the barge and sink into the sound. The effort to retrieve the submerged lighthouse was deemed too great, and the structure was abandoned.

Decades later the town of Manteo decided to build a replica of the lighthouse as the bricks and mortar component of their 1999 centennial celebration. Funding delays, objections by the U.S. Army Corps of Engineers, and Hurricane Isabel all contributed to push the completion date well beyond the centennial year. Finally, on September 25, 2004, the replica was dedicated, along with the George Washington Creef Boathouse, and opened to the public. The lighthouse, which stands where the towns wastewater treatment plant formerly stood, is a great addition to the waterfront and helps remind Manteo residents of the towns proud maritime heritage. To add a crowning touch of authenticity to the lighthouse, the Coast Guard has loaned a historic fourth-order Fresnel lens for display in the lantern room. The Roanoke Island Maritime Museum operates the lighthouse as part of its facilities.

For a larger map of Roanoke Marshes (Replica) Lighthouse, click the lighthouse in the above map.

From Nags Head, take Highway 64 west over Roanoke Sound and turn right into Manteo. After 1.6 miles, turn right on Agona Street and follow it to its end where you will find Roanoke Marshes Lighthouse. There is limited parking on the street, and a short boardwalk leads to the lighthouse.

The replica is owned by the Town of Manteo. Grounds open, lighthouse open in season.