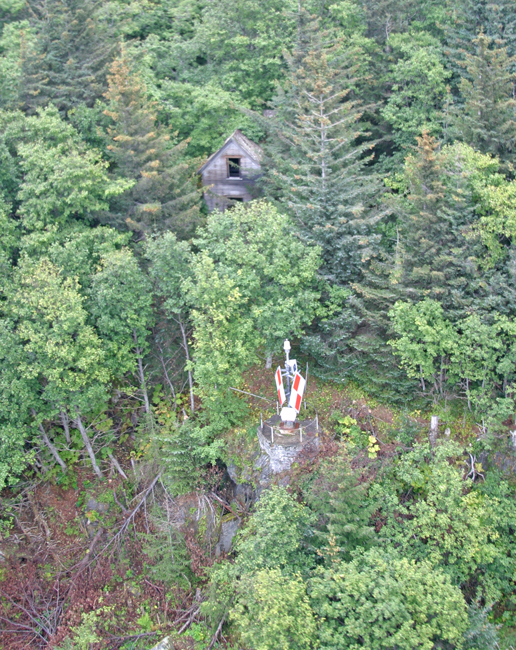 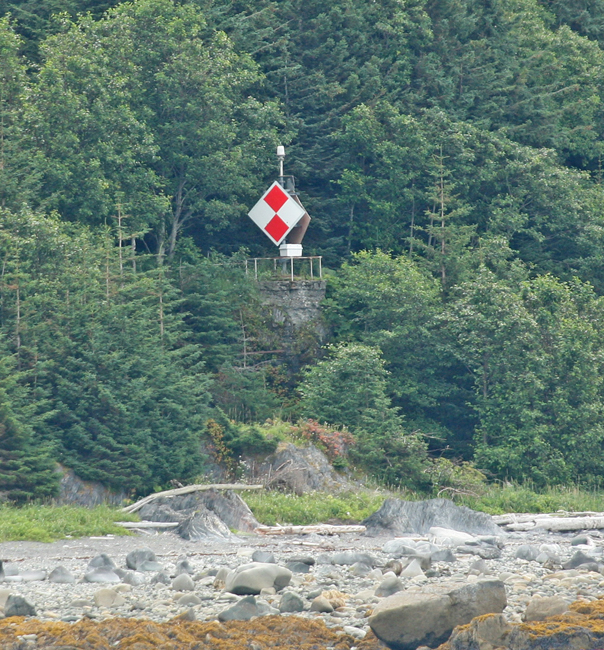 Captain Richard W. Meade, a graduate of the U.S. Naval Academy, served as a Union commander in the Civil War, and then in 1868, was placed in charge of the U.S.S. Saginaw and sent to the recently acquired Alaskan Territory. While sailing along Lynn Canal, Meade named a point of land on the east side of the canal, situated roughly midway between Juneau and Skagway, Point Sherman, after the Civil War Union General William Techumseh Sherman. Point Sherman Light Station was constructed during the summer of 1904 using hired labor and was first lit on October 18 of that year, making it the eleventh lighthouse built by the United States in Alaska. The light was similar to ones constructed on Fairway Island and Point Retreat and was displayed from a black hexagonal lantern room situated atop a white, hexagonal tower, six feet in height. A one-and-one-half story keepers dwelling and a boathouse were located just east of the light.

Andrew Jackson, the first keeper of the light, must have been a fine lighthouse keeper if he devoted as much attention to the light as he did to his garden. On November 10, 1907, he submitted the following report on the seeds and plants he had been supplied from an experiment station.

The choice selection of garden seeds and the nursery stock which you kindly sent this station were duly received in excellent condition, and were planted. The apple trees made a growth of 10 to 20 inches in the season. The plum tree withered, but the balance of the trees are doing nicely. Red currants made an average growth of about 10 inches, with some fruit; the plants look well and strong. White currants took root and are doing well, but no fruit. Raspberries are doing nicely. The mint looks fine and horse-radish is doing nicely. The basket willows are growing slowly. The greater number of the hardy vegetables have done fairly well and I have found the seeds of good quality. The flower seeds did not germinate, although planted in boxes and kept in a good warm place. My greatest success has been with potatoes, and I was informed by Mr. P. J. Werlich, light-house inspector, that I had the largest potato tops that he had ever seen in Alaska. Some of these potato tops measured over 5 feet in height, so there is some reason to believe that his statement is well founded. Some of the potato hills contained from 20 to 40 potatoes, weighing from 6 to 8 pounds to the hill. The largest potato weighed 1 1/2 pounds. The potatoes from 20 hills would more than fill a sack, and those from 3 to 4 hills would fill a good-sized water pail. But all my potatoes were not like this, for some were small and not of good shape. This was where the ground had not received the proper amount of the right kind of fertilizer. Where no fertilizer was used the potatoes were no better than last year, although this was a more favorable summer than last year. This proves that the condition of the soil is of more importance than the weather. It will be a cold summer, indeed, when potatoes fail to grow in Lynn Canal, provided the soil is in proper condition. I succeeded in getting a fairly good stand of orchard grass, also white clover, which is still green and growing at this late date. The apple trees received in the spring of 1906 were almost destroyed by the snow last winter, which stripped off all of the branches. The raspberries made a growth of new stalks from 30 to 50 inches, but there were only a few berries this summer. Red and white currants are growing slowly and are in good condition, but there is no fruit this year.

On September 1, 1911, the original fixed white oil light was replaced by an acetylene light that produced a white flash every three seconds and raised the lights focal plane from thirty-eight to forty-two feet above high water. With this change, the light was automated, and its final keeper withdrawn. Point Shermans sister lights at Point Retreat and Fairway Island were also converted to acetylene lights and automated at the same time.

In 1932, the station was transferred to the Forest Service and replaced by a nearby buoy. A dayboard and a light were placed on the site of the original light in 1981.

For a larger map of Point Sherman Lighthouse, click the lighthouse in the above map.

Point Sherman Lighthouse, though a bit hidden, is visible from cruise ships and ferries that pass through Lynn Canal to and from Haines and Skagway. Specific options include the Alaska Marine Highway ferries and Alaska Fjordlines, Inc..

The lighthouse can also be seen from small planes that regularly fly between Juneau and Haines/Skagway.

The lighthouse is owned by the Coast Guard. Grounds/dwelling closed.