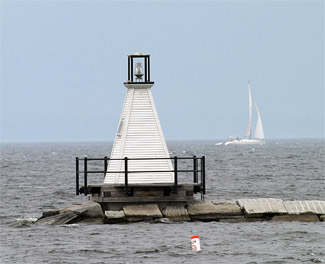 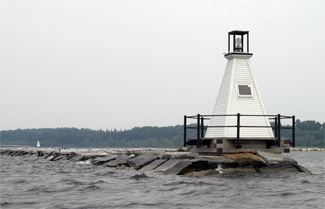 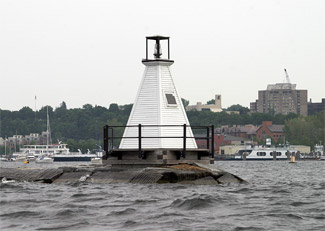 In 1823, the forty-six-mile-long Champlain Canal was completed, linking Lake Champlain to the Hudson River and the New York City market, and twenty years later, the twelve-mile-long Chambly Canal was constructed in Quebec, bypassing the Richelieu River rapids and allowing cheap Canadian lumber to flow from the St. Lawrence River to Lake Champlain. These two canals led to the growth of the port at Burlington, and by 1873, Burlington had become the third largest lumber port in the country. The harbor at Burlington, exposed to winds from the south and the northwest, offered little protection for vessels until work on a federally funded breakwater began in 1837. Completed in 1854 at a cost of $28,727, the V-shaped breakwater was 1,000 feet in length but was subsequently lengthened as wharf construction continued to grow along the Burlington waterfront.

Wooden lighthouses were first placed on the ends of the breakwater in 1857 to mark the entrances to the harbor, after Congress provided $2,000 for their construction on August 3, 1854, and as the breakwater grew, the lights were relocated. The wooden towers were exposed to wind, ice, and even fire  the northern tower burned in 1870, and in 1876 the southern light was knocked over in a storm. The original towers exhibited fixed white lights at a height of twenty-one feet above the water using sixth-order lenses.

In 1870, the Lighthouse Board requested funds to build a keepers dwelling on the pier after providing the following justification:

In the spring and fall these beacons are reached by the keeper with great difficulty, not to say sometimes at the risk of his life. To fail to light them at any time would be a very serious business for those navigating the lake, but especially so when the weather is such as to render it hazardous to go to the breakwater by boat. It is therefore deemed of considerable importance to provide a dwelling for the keeper on the spot.

After Congress provided $7,500 on March 3, 1871, the Lighthouse Board had planned to build a dwelling with a light atop it at the end of the northern extension to the breakwater, but when the extension was delayed, a temporary beacon was used to mark the limit of the work, and the dwelling was built between the two beacons in 1875. Keeper James Wakefield apparently preferred to live in the city with his family and row out to the breakwater to tend the lights, and after the dwelling had sat unoccupied on the pier for a decade, it was sold at public auction and then moved to Burlington to be used as a private residence. In December 1876, the ninety-foot-long wooden schooner General Butler, captained by James Montgomery, left Isle La Motte bound for Burlington loaded with thirty tons of marble. Captain Montgomery had a deckhand on board plus his sixteen-year-old daughter and her girlfriend and an injured quarry worker headed for the hospital in Burlington. During the journey, a storm blew up, and a mountainous wave struck the vessel, tearing its wheel from the rudder post. An anchor was tossed overboard to hold the schooner in place until means for steering the vessel could be jerry-rigged. This improvised tiller, however, proved ineffective, and the uncontrollable schooner struck the Burlington Breakwater. Captain Montgomery succeeded in getting those aboard the General Butler safely onto the breakwater, where they then faced the prospect of dying from exposure.

A crowd had gathered on shore to witness the schooners attempt to reach the protected waters behind the breakwater, and from this number, Keeper James Wakefield, stepped forward and bravely rowed his skiff out to the breakwater and rescued the stranded quintet from certain death.

On October 21, 1907, a bell, struck a double-blow by machinery every twelve seconds during thick or foggy weather, was established on the lighthouse at the south end of the breakwater.

On the evening in 1938 when the lights were manually lit for the last time, Keeper Rolla W. Hill was ceremoniously accompanied back to shore by a small flotilla of twelve boats carrying seventy-five people.

In 1999, Vermont Senator Patrick Leahy secured $1.3 million for stabilizing Burlington Breakwater, and an additional $2.5 million was added to the repair work by another bill in 2001. The Burlington waterfront is a hub of commercial and recreational activity and the breakwater is a major reason why, said Leahy. Without that barrier, the waters would be too rough to enjoy the safe harbor we have now.

Given the historic significance of the breakwater, Burlingtons Mayor Peter Clavelle came up with the idea of replicating the original lighthouse structures and approached Senator Patrick Leahys office for funding. Leahy was able to obtain $250,000 for the project through a transportation bill in 2001.

The lighthouses were built on the Burlington waterfront by Atlantic Mechanical, Inc. of Wiscasset, Maine, so the public could view the construction process. Nearby, a kiosk, staffed with a historical interpreter, provided information about the Burlington breakwater and the lighthouse project.

When the original lighthouse plans could not be located, Art Cohn, director of the Lake Champlain Maritime Museum, stepped in to help. What we did, he says, was use photographic evidence to create a set of plans that from the outside seem historically correct, and of course we chose two different time periods to represent  the smaller, southern light tower, which is circa 1857, and the larger, northern light tower which is circa 1890. We worked with the photographs and other historical images to ensure that people seeing the towers today would be actually viewing the same façade that they would have seen during those time periods. The northern light has a focal plane of thirty-five feet above the water, while the south lights focal plane is just twelve feet.

The two lighthouses are designed to withstand the environmental challenges that destroyed earlier versions. The lower portion of the northern lighthouse consists of heavy steel members capable of resisting forces approaching 400 pounds per square inch. The steel frame was covered with wooden panels, the bottom six feet of which are designed to break away in the event of a major catastrophic ice event, leaving the steel frame and the remainder of the structure intact.

The south lighthouse was activated on September 12, 2004, when the assembled crowd reached its terminal count at 7:35 p.m. Seconds later, a flare lit the sky about the northern lighthouse, and it too began to flash. Speaking at the lighting ceremony, Senator Leahy remarked: I love Lake Champlain, and I always thought its beauty could never be improved. But these distinctive new lighthouses proved me wrong. They bring an historical context to the rebirth of the Burlington waterfront. They are beacons that beckon us to enjoy and appreciate our lake. They welcome and guide pleasure boats, tourists and Vermonters looking for a picturesque place to relax and to enjoy the magnificent views. Lighthouse lovers everywhere are really going to enjoy seeing them.

The north lighthouse lost its lower skirting in 2011 when Lake Champlain experienced extremely high water levels, and it had not been replaced as of 2014.

For a larger map of Burlington Breakwater South Lighthouse, click the lighthouse in the above map.

The lighthouse can be viewed from the Main Wastewater Treatment Facility in Burlington. Follow Battery Street, which parallels the waterfront, south until it ends. Turn right onto Maple and then left onto Valley Lane that will lead to the treatment facility.

Good views of the lighthouse should be possible from cruises aboard Spirit of Ethan Allen.

The lighthouse is owned by the City of Burlington. Tower closed.