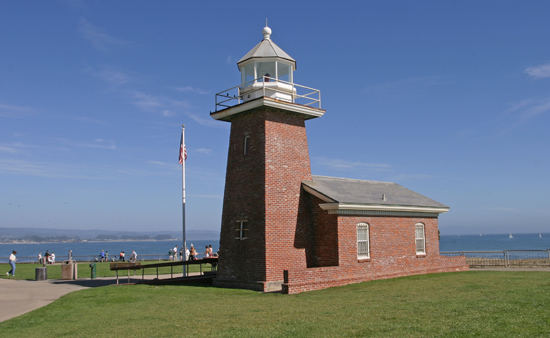 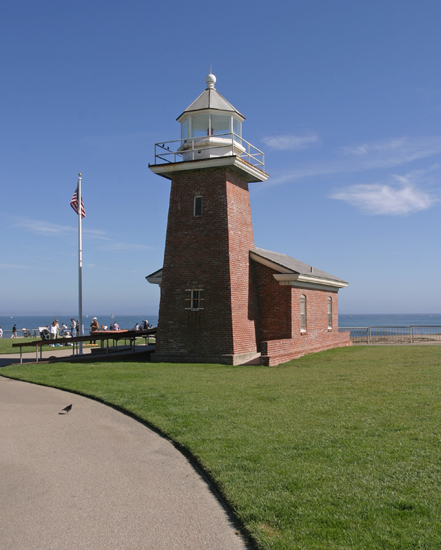 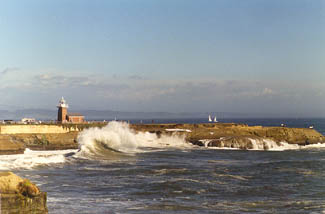 Santa Cruz, located on the northern side of Monterey Bay, was home to a busy port in the mid-1800s, with ships dropping anchor in the harbor to take on loads of redwood, lime, and various agricultural products. Authorities felt a lighthouse was needed to guide traffic into the harbor, and Congress set aside a sum of $30,000 on August 31, 1852 for the erection of Santa Cruz Lighthouse. Point Santa Cruz, which forms the western boundary of Santa Cruzs harbor was selected as the desired location for the beacon, however, years were spent trying to determine the rightful owner of the prized property, and the majority of the original $30,000 appropriation was returned to the U.S. Treasury. Lighthouse construction virtually came to a halt during the Civil War, but efforts to procure a lighthouse for Santa Cruz were restarted in 1865. Congress allotted $10,000 for the lighthouse on March 2, 1867, and in April 1868, a ruling by the California Supreme Court brought to an end the long-standing dispute over the property. The following month, ten acres on Point Santa Cruz were purchased from the now lawful owner for $2,400 in gold coin.

The construction plans used for the original Ediz Hook Lighthouse in the Territory of Washington were recycled at Santa Cruz. The lighthouse was to be just that  a one-and-a-half-story house with a pitched roof surmounted by a square light tower. Work on the wooden structure, which would rest on a brick foundation, began in the summer of 1869 and was completed in just a couple of months at a contract price of $4,350. Meanwhile, the octagonal lantern room was fabricated at the lighthouse depot on New Yorks Staten Island and then shipped to California. A fifth-order Fresnel lens and a lard-oil lamp were installed in the lantern room after its delayed arrival, and the lighthouse was ready for its first lighting on January 1, 1870. Santa Cruz Lighthouse entered service as the twelfth beacon along the California coast.

Only three head keepers served at Santa Cruz Lighthouse. Adna A. Hecox, a former clergyman and politician in Santa Cruz, moved into the lighthouse in 1870 with his wife Margaret, fourteen-year-old daughter Laura, and ten-year-old son Orville. Adna crossed the plains and Rocky Mountains with his wife and three children in 1846, and shortly thereafter settled near Santa Cruz. Margaret did not find the lengthy trek to be too pleasant an experience, stating I have been often asked if I did not find many things to enjoy in our journey across the Plains, and I have been obliged to answer no. Adna and Margaret must have found at least a few enjoyable things at the lighthouse, as they would remain there for the rest of their lives. To help provide for the family, a large garden was kept on the lighthouse reservation along with a horse, a cow, and numerous chickens.

When Adna Hecox assumed responsibility for the lighthouse, it was situated some 300 feet from the points extremity. By 1878, it was feared that sea caves, which extended deep into the cliffs on both sides of Point Santa Cruz, were starting to jeopardize the lighthouse. Orders to relocate the structure were received in 1879, and the wooden lighthouse was jacked up off its foundation, placed on wooden rollers, and pulled about three hundred feet north by a team of horses. Local house mover Joseph Roberts was paid $750 for the work, which also included the construction of a foundation and brick cistern at the new site. (The original brick foundation can be seen today along the edge of the point. The cluster of cypress trees on the north side of Cliff Drive stood next to the lighthouse at its second location.) Further change came to the lighthouse in on January 1, 1881, when the lights signature was changed to fixed red by replacing the lamps clear, glass chimney with a red one.

Adna Hecox died at the lighthouse in 1883 at the age of seventy-seven. For years, Laura Hecox had helped her father care for the light, and she was soon officially promoted to keeper. As a child, Laura had suffered a bad fall, resulting in the paralysis of one side of her body. Though she largely recovered from the incident, it seems some form of disability remained with her throughout her life. One visitor to the lighthouse wrote many a child would have been soured by her fate, but she soon began to take pleasure in the study of shells, until she is quite an authority on this coast. When Laura was not tending the light, she would scour the coastline looking for shells or venture inland in search of fossils and animal life. Laura quickly developed an expansive collection of artifacts that were displayed at the lighthouse in cherry wood cases built by her father. Eventually, the collection even spilled onto the lighthouse grounds where a whale rib and vertebrae were exhibited.

Lauras hobby brought her wide recognition, and she frequently corresponded with professors and experts around the country. A new variety of banana slug along with a new species of fossil spindle shell were named in her honor by two of her long-distance acquaintances, an impressive honor for a full-time lightkeeper and part-time conchologist. When the Santa Cruz public library was built in 1904, Laura was asked to deed a portion of her collection for a museum in the librarys basement. Remnants of Lauras collection can be found today in the Santa Cruz Museum of Natural History.

In 1913, the original, fifth-order lens was replaced with a more powerful, L. Sautter fourth-order lens. City lights were starting to compete with the lighthouse so its signature was changed to occulting at this time. Since the new lens produced a constant light, an eclipser was installed inside the stationary lens to produce a blinking pattern. Powered by a 130-pound weight suspended below the lantern, a pair of vertical screens revolved around the lamp, producing 3.5 seconds of light, followed by 1.5 seconds of darkness.

Various family members lived with Laura during her years of service at the lighthouse. Laura helped care for her mother until her passing in 1908, and Lauras sister and brother-in-law, Alwilda and Thomas Organ, both ministers, resided at the lighthouse for a time. When Laura finally retired on July 1, 1916, she and her brother moved out of the lighthouse into a tiny cottage east of Santa Cruz. Laura would visit the lighthouse regularly, and her final trip was just two days before her death on August 18, 1919.

Arthur Anderson began his service as the third and final head keeper on October 10, 1916. He had previously served as a lighthouse inspector, but poor health forced him to accept the less strenuous position of keeper of Santa Cruz Lighthouse. Electricity arrived at the lighthouse about six months after Anderson, further simplifying his job. Life as a keeper at Santa Cruz must have agreed with Anderson, as he served until his retirement in November 1940, the year after the Coast Guard assumed responsibility for the nations lighthouses. In February 1941, the Coast Guard built a twenty-six-foot-tall, wooden framework tower 200 feet seaward of the lighthouse. The light from the lens lantern atop the tower, though dimmer than that produced by the lighthouses Fresnel lens, became the stations official beacon, and the lighthouse was deactivated.

The City of Santa Cruz signed an agreement with the Coast Guard to lease the inactive lighthouse and surrounding grounds for use as a park. However, fear was rapidly growing that the country would soon become involved in World War II, and the government decided to retain the strategic property. A caretaker was hired to live in the lighthouse, maintain the property, and keep an eye on the light. Nicholas Dowell, a foreman for the local electric company, was well suited for the job, and he moved into the lighthouse with his wife, daughter and grandson. The family didnt have too much privacy in their new home, but that was a price they were willing to pay for their rent-free accommodations. Coastguardsmen lived upstairs in the lighthouse and used the tower as a lookout. In April 1942, the area surrounding the lighthouse, now known as Lighthouse Field, became home to the 54th Coast Artillery Regiment, an all-black unit assigned to protect the nearby coastline.

The Dowells vacated the lighthouse a couple years after the war, and in 1948 the Coast Guard placed the lighthouse on the auction block, with the stipulation that it be removed from the property. There was talk of turning the lighthouse into a museum, but when the sealed bids were opened, Austin Furlow, a local carpenter, had himself a lighthouse. On May 20, 1948, Furlow and his son, Kenneth, arrived at the lighthouse, and rather than move the structure, they dismantled it and used the lumber for other projects. Santa Cruz had lost its lighthouse, but years later through a familys loss, a new lighthouse would return to Point Santa Cruz.

On February 28, 1965, eighteen-year-old Mark Abbott drowned while bodysurfing in the waters near Pleasure Point, three miles east of Point Santa Cruz. Marks parents, Chuck and Esther Abbott, had purchased a life insurance policy for their sons eighteenth birthday, and shortly after the accident they received a $20,000 payment. Remembering that Mark had enjoyed the lighthouses seen during their family vacation along the Oregon coast, the Abbotts decided to use the insurance money to donate a lighthouse to the city in honor of their son.

Five years earlier, the city had purchased all of the lighthouse property except for the area immediately around the still active wooden Coast Guard tower. In 1967, the redbrick Mark Abbott Memorial Lighthouse was built adjacent to the wooden tower that it would replace. The lantern room from the decommissioned Oakland Harbor Lighthouse was used atop the new lighthouse, and Marks ashes were buried at the base of the tower. (Badly corroded, the lantern room was replaced in 1996.) Since 1986, the small lighthouse has been home to the Santa Cruz Surfing Museum, and now once again, Santa Cruz is home to a lighthouse filled with display pieces that can readily be seen in the waters surrounding the point.

In December 2008, facing a budget crisis, the Santa Cruz City Council voted to close the Surfing Museum. Not wanting to lose this iconic museum, the Santa Cruz Surfing Club Preservation Society quickly stepped in and raised $10,000 to keep the lighthouse open through June 30, the end of the fiscal year. When local icon Jack ONeill, inventor of the wet suit and founder of ONeill wet suits, donated $4,000 for the cause, several other individuals pitched in to help the society rescue the museum. The City of Santa Cruz has approved a plan for the society to assume responsibility for the museum in perpetuity.

For a larger map of Santa Cruz Lighthouse, click the lighthouse in the above map.

From Highway 1 in Santa Cruz, go south on Bay Street until it ends at West Cliff Drive. Turn right on West Cliff Drive and proceed for almost a mile to the lighthouse. The Santa Cruz Surfing Museum, which is housed in the lighthouse, can be reached at (831) 420-6289. During the summer, the museum is open Thursday through Tuesday from 10 a.m. to 5 p.m. The rest of the year, museum hours are noon to 4 p.m., Thursday through Monday.

The lighthouse is owned by the City of Santa Cruz. Grounds open, lighthouse open during museum hours, tower closed.


I've been told that there is an aerial view of the Mark Abott Memorial Lighthouse in the opening scenes of the movie Lost Boys.