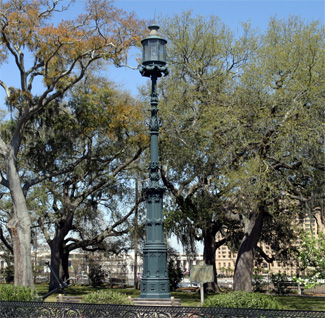 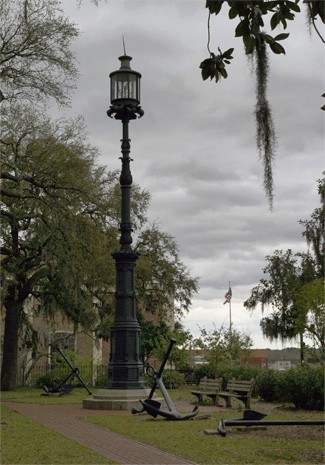 Bay Street runs along the river in Savannah, and for a few blocks the historic redbrick buildings that line the north side of the street are two stories facing Bay Street, but in the rear, they extend four stories down to the wharf. In the 1800s, being on the Bay, was a sign of a business prestige.

In October 1855, J.F. Gilmer, Captain of Engineers, sent the following to the Lighthouse Board recommending the erection of a harbor beacon on the bay, city of Savannah, as an aid to vessels approaching the city at night.

I would propose the erection of a cast iron column 25 feet high, surmounted with a lantern similar to the street lanterns of a city, but much larger, and with red lights. The column should be enclosed with a suitable railing, for protection. The cost would be about $2,000. If desired by the board, the mayor of Savannah will make application at once to the legislature of Georgia for the grant of jurisdiction, &c, and the city will give the land necessary for the purpose.

On August 18, 1856, Congress appropriated $2,000 for a small light to be erected on the bay, in the city of Savannah, to guide vessels from Fig Island light-house, and during 1857 and 1858, $1,969.12 was expended in completing the light. The beacons gas light shone from a focal plane of seventy-seven feet as an aid to ships entering Savannahs harbor. The harbor beacon was referred to as The Bay on Light Lists and by the Lighthouse Board, and the Savannah City Gas Company was paid $150 annually to care for the light.

In conjunction with Fig Island Lighthouse, The Bay served as a range light to guide incoming vessels past six Revolutionary War ships intentionally scuttled by the British in 1779 to keep French ships out of the harbor. The Lighthouse Board noted the following for The Bay in 1869: This beacon-light being no longer a range, has been discontinued.

Known today as the Old Harbor Light, the ornamented cast-iron shaft that served as The Bay is now flanked by several large ship anchors and stands in Emmet Park overlooking the Savannah River.

In 1958, the centennial year of the erection of the Old Harbor Light, the Trustees Garden Club developed the portion of Emmet Park where the beacon now stands. Years of salty humidity slowly ate away at the twenty-five-foot, cast-iron post, and in the late 1990s, the structure was found to be unstable. Cables were put in place to stabilize the beacon, and the lamp was extinguished.

Restoration of the beacon was planned as part of a $3 million-plus effort to clean and repair Savannahs forty-three historic monuments, which draw tourists from all parts to the historic city. The cost of restoring the beacon range light was projected to be $200,000, and the Savannah Morning News and CSX Corp. each graciously donated $62,500 towards the effort. During the first week of August 2000, the range light was disassembled into six parts, and a crane then hoisted the parts onto a flatbed truck, which carried them to a fabrication shop for the needed repairs.

Rust was removed. Repairs to the corroded iron were made. The lenses were cleaned, and on January 11, 2001, the restored Old Harbor Light was relit in Emmet Park.

For a larger map of Savannah Harbor Light (The Bay) Lighthouse, click the lighthouse in the above map.

Follow Savannah's cobbled River Street east along the river. As you make the U-turn at its eastern end and climb up to East Bay Street, the Old Harbor Light will be on your right in Emmet Park.

The lighthouse is owned by the City of Savannah. Grounds open.