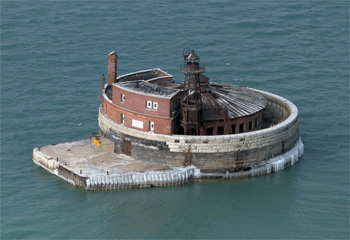 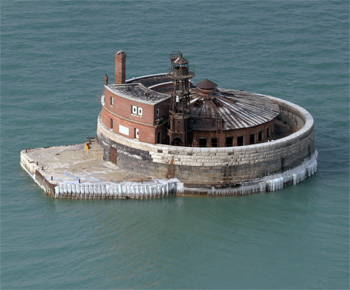 
This crib, the second built to supply water for Chicago, was built farther out in the lake to avoid contaminants fed into Lake Michigan by the Chicago River. Completed in 1891, the stone and brick crib alone cost $472,890.93, but the total cost of the system, which included two six-foot-diameter tunnels connected to pumping stations at Park arrow and Indiana Avenue, came to $1,526,143.68.

Four Mile Crib was equipped with a steam heating plant in 1898 that kept the temperature inside the cribs well room at 70° and eliminated the need for extra keepers during the winter to keep the formation of ice in check. A red skeletal iron tower topped by a silver lantern was mounted atop the crib, where it displayed a white flash every three seconds at a focal plane of sixty-six feet. In 1932, the Bureau of Lighthouses noted that a submarine cable had been laid from Chicago Harbor Lighthouse to Four Mile Crib to power its light, and a two-room addition had been constructed on the crib.

For a larger map of Four Mile Crib Lighthouse, click the lighthouse in the above map.

Four Mile Crib Light can be see distantly from Chicago's Navy Pier, but the best views would come from a boat or plane.