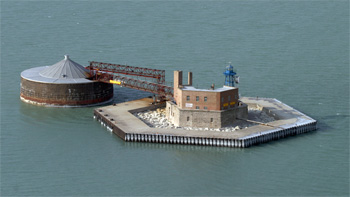 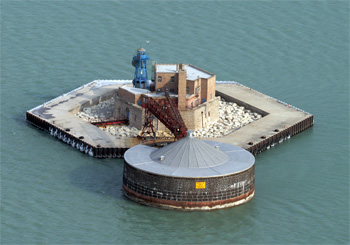 Built in 1892, the 68th Street Crib is so named because it lies offshore from the eastern end of 68th Street. The intake crib originally supplied two tunnels. One with a diameter of twenty feet, that fed the Jardine Water purification plant, the largest purification plant in the world at that time, and a second tunnel, with a diameter of ten feet, which fed the South water purification plant. The warning light for the crib was exhibited from a four-sided pyramidal skeletal tower topped by a lantern room, and a fog bell was tolled every twelve seconds when needed.

In 1908, work started on a second crib attached to the 68th Street tunnel system to increase the inflow to the city. On January 30, 1909, a fire broke out on this crib, known as the Intermediate Crib, which claimed the lives of seventy of the one hundred men that were working on it. The intermediate crib was replaced by the Edward F. Dunne Crib.

Built in 1909, fifty feet from the 68th Street Crib, the Edward F. Dunne Crib is named after Edward Fitzsimmons Dunne who was Mayor of Chicago when the plans for the structure were approved. The circular crib has a diameter of 110 feet and stands in thirty-two feet of water. The interior well has a diameter of sixty feet and was connected to a pair of new tunnels.

A steel footbridge linked the Dunne Crib to the older 68th Street Crib, allowing one set of keepers to service both cribs. The navigational aids on the 68th Street Crib, which were electrified in 1923, were deemed sufficient for both structures.

The following is a newspaper article from the December 20, 1964 edition of the Chicago Tribune:

Robert Melone, who is in charge of the Dunne crib, situated in Lake Michigan 2 ½ miles off East 68th street, said they would have a large Christmas dinner the same as you would have at home. He said the dinner would probably be a lot like the Thanksgiving dinner which he and his crew ate.

There usually are two or three men in the crew, depending on the weather, Melone said. They are brought out to the crib on a Monday and spend every other week there. Melones crew was lucky enough to catch both Thanksgiving and Christmas, but theyll miss New Years

Were all family men, Melone said. Two of us have grandchildren. After a thoughtful pause, he added, Thats what Ill miss most.

The crib crews must keep a constant watch on huge intakes to prevent them from being clogged. In the summer the trouble is with fish. In the winter, its ice.

They keep ice clear with pike poles, or, if the ice begins to collect too rapidly, dynamite.

For a larger map of 68th Street Crib (Dunne Crib) Lighthouse, click the lighthouse in the above map.

A distant view of the 68th Street Crib Light is possible from Jackson Park Beach, but the best views would come from a boat or plane.