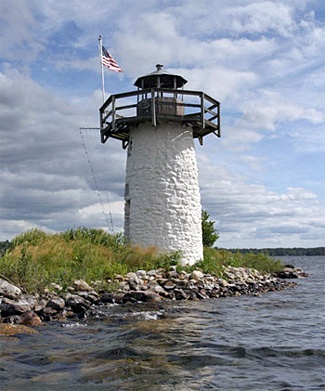 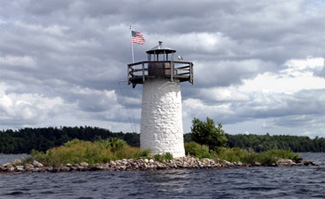 Lake Cobbosseecontee, located just a few miles west of Augusta, Maines capital, is nearly nine miles long and has an average width of roughly a mile. The lakes interesting name is believed to be an Abenaki Indian word that means the place of many sturgeon. While sturgeon arent caught today, the lake is known for its outstanding bass fishing.

In 1904, the Augusta, Winthrop, and Gardiner Street Railway leased the majority of eight-acre Island Park, situated near the northern end of the lake, and built a theater and an open air dancing pavilion. People would take a trolley to Winthrop, cross a bridge to the island, and spend the day swimming and picnicking. At night, they could dance to big band music or take in a play. On a summer weekend, as many as 1,200 people would flock to the island.

Hotel Pines was also located on Island Park, just one of the numerous hotels, inns, and sporting camps that sprung up along the shores of the lake. Steamboats circled the lake in about five hours, dropping off and picking up passengers along the way. As there was no restroom on board, the steamer would call at a small island, about a mile south of Island Park, where the ladies could make a comfort stop. According to local legend, this is why the islet is known as Ladies Delight.

While Ladies Delight may have been a relief to some, it posed a serious threat to mariners, especially at night. Daniel Robinson organized the Cobbosseecontee Yacht Club (CYC) in 1904, and just a few years later he hired Frank Morse, a Boston architect, to design a lighthouse to mark Ladies Delight. In 1908, the yacht club erected the sixteen-foot-tall stone lighthouse, with the help of two oxen that were transported to the island. In 1913, a tablet was mounted on the lighthouse in memory of Daniel C. Robinson.

Kerosene lanterns served as the towers original light source, with a volunteer from the yacht club visiting the island each evening to service the light. For a period in the 1930s, a wind-powered generator ran an electric light in the lantern room, but the lighthouse now receives its power from a submarine cable.

The Cobbosseecontee Yacht Club initiated a restoration of Ladies Delight Lighthouse in 2001. That year, a severe list that had developed in the tower was corrected. In 2005, welder Mark Newcomb fabricated a new lantern room for the lighthouse using marine grade aluminum to replace a wooden one that had been in service for about fifteen years. The aluminum lantern room was anchored to the tower by stainless steel rods and given a protective coating used in truck beds. CYC Commodore Hugh Stephens dedicated the refurbished lighthouse on July 16, 2005, as a large crowd watched from boats of all shapes and sizes.

A bronze plaque, listing the generous corporations and individuals who contributed either $5,000 or $1,000 to the restoration effort between 2001 and 2005, was installed on the tower in 2008, the hundredth anniversary of the lighthouse. The tower was power washed and refinished in 2011, leaving it gleaming white once again.

For a larger map of Ladies Delight Lighthouse, click the lighthouse in the above map.

The lighthouse can be seen distantly from various points along the shoreline, but a boat is really needed to get a good view of the lighthouse. Boats can be rented from Lakeside Motel and Cabins, near the northern end of the lake.

The lighthouse is maintained by Cobbosseecontee Yacht Club. Grounds/tower closed.


We stayed at Lakeside Motel and Cabins, just off Highway 202 near the northern end of the lake. The lakefront motel has pedal boats and canoes, which guests are welcome to use. We procured one of the canoes and paddled out to the lighthouse - a unique method for visiting a lighthouse.