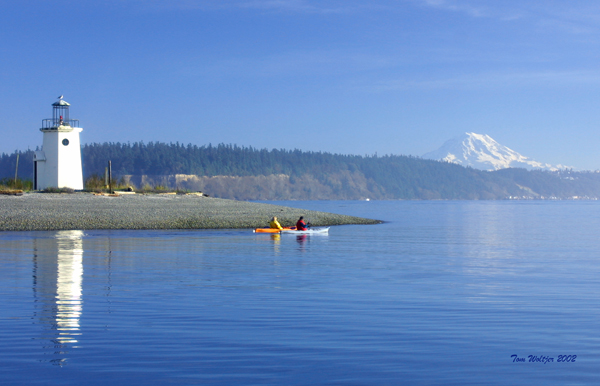 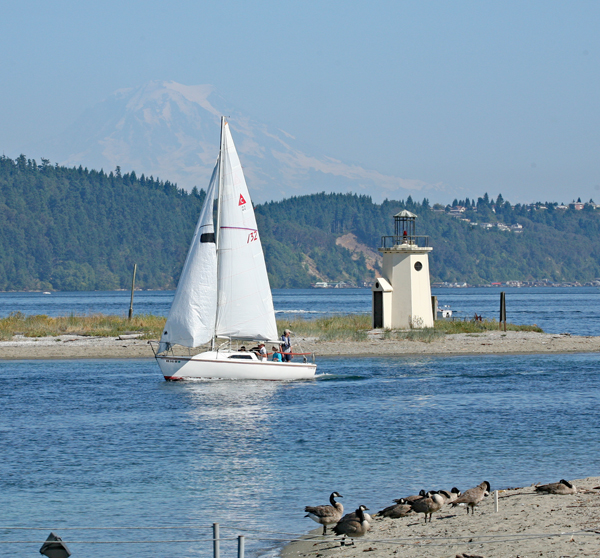 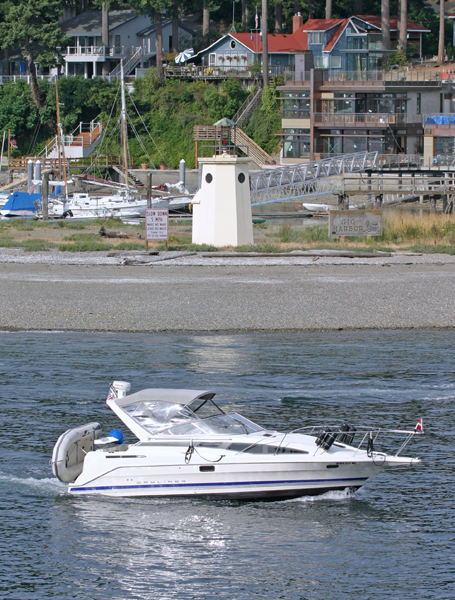 The diminutive Gig Harbor Lighthouse, displaying a red flashing light, was built in 1988 at the entrance to Gig Harbor. To raise funds for the project, the public was invited to purchase time capsules, which would be placed in the lighthouse and then opened after twenty-five years. The purchasers were encouraged to place such items as photographs, predictions, newspaper articles, and wine in their capsules and were allowed to designate to whom the contents should be given upon opening.

The tower stands fifteen feet tall and has an open lantern room. A dedication ceremony for the lighthouse was held in April 1989 in conjunction with the local Maritime Week and as part of the State of Washington Centennial and the Bicentennial of the U.S. Lighthouse Service.

The lighthouse replaced a minor aid to navigation that formerly occupied the site. Stevenson Sparks designed the lighthouse, which cost $30,000 in addition to a considerable amount of donated labor and equipment. Wade Perrow Construction and Lone Star Concrete built the tower, and Manson Construction Company ferried the lighthouse to the point and lowered it onto the selected site for free.

Click here to view a 1988 news report on the lighthouse.

As part of the twenty-fifth anniversary of the lighthouse, the time capsules were retrieved from the tower, returned to their owners, and then displayed at a park in Gig Harbor on April 26, 2014. A new round of time capsules to be opened in another twenty-five years were sold to the public. Four different sizes of time capsules were available ranging from an eighteen-inch-long PVC pipe with a diameter of four inches for $100 to an eighteen-inch-long PVC pipe with a diameter of ten inches for $1,000. The capsules had to be returned on June 28, 2014 and were placed in the lighthouse later that summer.

The Howard Coble Coast Guard and Marine Transportation Act of 2014, which passed Congress on December 11 of that year, included a provision transferring ownership of the property surrounding the lighthouse to the city. The City of Gig Harbor would eventually like to have a park on the sand spit on which the lighthouse stands. Due to surrounding private property, the park would be a marine park accessible only from the water. A ceremony was held at the lighthouse on June 6, 2015 to celebrate the transfer of the spit to the city.

Gig Harbor Lighthouse is listed on the official Coast Guard Light List as a private aid to navigation that exhibits a red flash every four seconds.

For a larger map of Gig Harbor Lighthouse, click the lighthouse in the above map.

From Highway 16 southwest of Gig Harbor, exit onto Pioneer Way and drive northeast into Gig Harbor. When the road tees, turn right on Harborview Drive and continue to its end where you will find a small park from which you can view the lighthouse. This view is from across the inlet to Gig Harbor. Access to the grounds around the lighthouse is from the water only, as the surrounding property is private.

The lighthouse is owned by the City of Gig Harbor. Grounds open/tower closed.