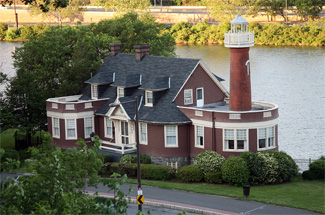 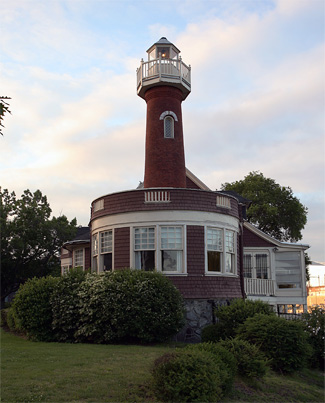 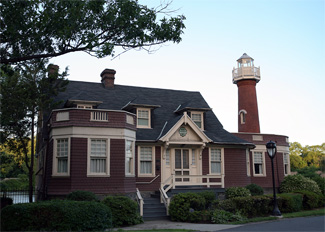 The 128-mile-long Schuylkill River (pronounced SKOO-kill, Dutch for Hidden River) winds through Philadelphia before emptying into the Delaware River. Around 1800, the Schuylkill was tapped as a water source for Philadelphians, but the initial pumping stations quickly proved to be too small for the growing city. In 1805, Frederick Graff initiated the design of a much larger water works to be located on the banks of the Schuylkill near the base of Fairmount, a bluff that overlooks the city and is now home to the Philadelphia Museum of Art.

Construction of the water works began in 1812, and three years later, a Federal-style building housing a pair of steam engines was completed on the east bank of the river. The steam engines pumped water up to a large storage tank located atop Fairmount where the water was then fed by gravity throughout the city in wooden pipes. The steam engines required twenty cords of wood each day and on two occasions exploded taking the lives of three men. It was soon realized that a safer and more economical source of power was the river itself, and a dam was built across the stream in 1821 to direct the water into a newly constructed mill house where it would turn large waterwheels to drive the pumps.

With its impressive architecture and innovative design, the Fairmount Water Works attracted admirers from near and far. After a visit in 1842, Charles Dickens noted, In Philadelphia there is a place that is wondrous to behold, and that is the Philadelphia Waterworks. Thomas Ewbank, who would later become the U.S. Commissioner of Patents, left the following description of the impression the water works made on him in 1840.

It is impossible to examine these works without paying homage to the science and skill displayed in their design and execution; in these respects no hydraulic works in the Union can compete, nor do we believe they are excelled by any in the world. Not the smallest leak in any of the joints was discovered; and, with the exception of the water rushing on the wheels, the whole operation of forcing up daily millions of gallons into the reservoirs on the mount, and thus furnishing in abundance one of the first necessaries of life to an immense population  was performed with less noise than is ordinarily made in working a smiths bellows!

Besides providing an economical source of water, the construction of the dam across the Schuylkill River also brought other advantages to the citizens of Philadelphia. The dam essentially transformed a section of the Schuylkill River from a tidewater stream into a lengthy freshwater lake. The lakes smooth surface soon became popular for rowing, a sport then in its infancy, and for ice skating in the wintertime.

In 1849, the Philadelphia Skating Club was established to promote the sport and rescue skaters in danger. The Schuylkill Navy, a collection of rowing clubs that is still in existence today, was formed in 1858 with nine initial clubs and approximately 300 members. The City of Philadelphia had purchased the Lemon Hill Estate in 1844, and just over a decade later, the city converted the property into Fairmount Park. The park included riverfront property near the water works, and in 1860, an ordinance was passed allowing the skating club and Schuylkill Navy to respectively build a clubhouse and boathouses along the river. Over the years, several boathouses have been built along the shoreline near the water works dam. Today, ten of the boathouses remain along what is known as Boathouse Row, now recognized as a National Historic Landmark.

The street on which Boathouse Row is located has been renamed Kelly Drive in honor of John B. Kelly, Jr., a member of the rows Vesper Boat Club, a four-time Olympian, and an Olympic bronze medalist in single scull. Kellys father won three gold medals in sculling and was also a member of the Vesper Boat Club. Perhaps the most famous member of the family, however, is Kellys sister, Grace Kelly, the movie-star-turned-princess, to whom Kelly gave his bronze medal as a wedding present. John B. Kelly, Jr. would later serve on the Fairmount Park Commission and, for twelve years, as a City Councilman-at-Large.

In 1887, the Fairmount Park Commission granted approval for a lighthouse to be built near Turtle Rock  a rock formation, resembling a giant tortoise shell, located on the hill above the boathouses. Besides skaters and rowers, the Schuylkill was also home to ships of the Schuylkill Navigation Company, which transported anthracite coal from upstate Pennsylvania to Philadelphia and would benefit from a light near the dam. As part of an agreement struck with the navigation company when the dam was constructed, the city also built a canal and locks to permit navigation on the river to continue.

Turtle Rock Lighthouse was constructed in 1887 by Frank Thurwanger at a cost of $2,663 on a plot of land just west of boathouse row. The brick lighthouse supports a hexagonal lantern room surrounded by an octagonal walkway. Gas was first used to power the light, but in 1990, when the lighthouse was re-pointed and received a new wooden balustrade and newel posts, the beacon was electrified.

The Sedgeley Club, formed in 1897 as the Bicycle, Barge and Canoe Club, originally occupied boathouse #14, but in 1902, it applied for permission from the Fairmount Park Commission to build a new home at #15 Boathouse Row. The structure was completed the following year with its western end encircling the base of Turtle Rock Lighthouse. The clubs membership was initially composed of Philadelphia ladies who enjoyed canoeing on the Schuylkill River, but by World War II the club had transformed into more of a social organization. The Sedgeley Club remains an exclusive womans club hosting numerous social gatherings as well as fundraising events that help maintain the historic boathouse and the treasured Turtle Rock Lighthouse, which is only lit on special occasions.

You dont have to be a Philadelphian or a female to see the inside of The Sedgeley Club (and perhaps the lighthouse), as the boathouse can be rented for private functions.

Turtle Rock Lighthouse isnt the only navigational aid to grace the banks of Schuylkill River. In March 1875, Congress set aside $15,000 for a set of range lights to guide mariners into the mouth of Schuylkill River from Delaware River. The land chosen for the range lights was on the naval reservation on League Island, so authority had to be obtained from the Secretary of the Navy before construction could begin. Work was carried out in 1875, and the range lights were activated on December 15 of that year. The Lighthouse Board published the following description of the new lights:

Two piers have been erected on League Island Flats, near the mouth of the Schuylkill, and beacons supplied with sixth-order illuminating apparatus placed upon them to serve as range-lights for entering the mouth of the river. The piers are connected with the river-bank by plank walks. A keepers dwelling has been erected adjacent to the two piers, according to plans approved by the board.

On June 30, 1897, the lights were moved to a new range, about 100 feet north of the old one in order to mark a newly dredged channel over the river bar. That same year, the seawall in front of the dwelling was rebuilt, and the keepers dwelling was raised about five feet.

Two steel towers were erected to mark the range at a cost of $2,431 in 1921, and in 1923, a fire nearly destroyed the keepers dwelling. Lights atop skeletal towers were marking the river entrance in 2016. The Philadelphia Naval Shipyard closed in 1995 as part of base realignment and closure, though the Navy still maintains a presence on the property at the mouth of Schuylkill River.

For a larger map of Turtle Rock Lighthouse, click the lighthouse in the above map.

The lighthouse is owned by The Sedgeley Club. Grounds open, tower closed.