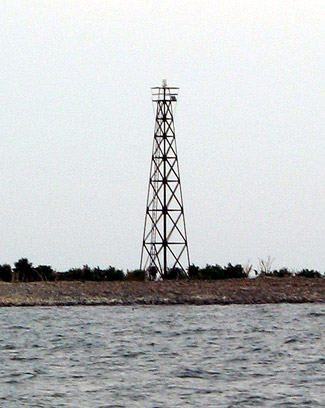 In 1907, the Lighthouse Board requested $85,000 for a lighthouse and fog signal on Gull Island given the following problem with nearby Michigan Island Lighthouse:

Vessels bound for Ashland from Keweenaw Point are unable to see Michigan Island light until abreast of it, and this difficulty is increased in time of fog, as there is no fog-signal at Michigan Island. Several vessels have run aground in this vicinity during storms. If there had been a light and fog-signal there, the wrecks might have been prevented.

Before allocating the full requested amount, Congress appropriated $2,000 on May 27, 1908 for a survey to determine the cost and feasibility of establishing a station on Gull Island. Major Charles Keller, a lighthouse engineer, completed the survey in September 1908 and recommended that a light and fog signal be established instead on the northeast end of Michigan Island and that the current Michigan Island Lighthouse be abandoned.

In 1910, the Lighthouse Board requested $100,000 for the new light and fog signal on Michigan Island. This request was repeated annually until 1918, when it was slightly modified to call for elevating the present Michigan Island Light, adding a fog signal, and establishing an automated acetylene light on Gull Island. The new plan would reportedly serve as a better guide to vessels and cost just $85,000. The Board petitioned repeatedly for this plan until 1928, when funds were finally appropriated.

The need for some sort of signal on Gull Island was punctuated by the wreck of the steamer Captain Thomas Wilson off the east end of the island in May 1921. The vessel was loaded with 7,800 tons of coal and was bound for Washburn, Wisconsin when it ran aground in a fog. Keeper Edward Lane at nearby Michigan Island Lighthouse rescued the crew and took them to Bayfield. The steamer was a total loss and joined a list of steamers, including the Robert Mirland and William E. Corey, that were wrecked on the island.

In 1929, a skeleton tower topped by an acetylene light was erected on the easterly middle part of Gull Island at a cost of $4,752. The light had a characteristic of a white flash every ten seconds, and from its focal plane of fifty-five feet, it could be seen for up to thirteen miles. The light was commissioned on September 30, 1929 and was subsequently minded by the keepers from Michigan Island. Keeper Ed Lane noted the following in his log that day: Put Gull Island in commission today. 10:30 AM. 15º Atmospheres registered on tank.

For a larger map of Gull Island Lighthouse, click the lighthouse in the above map.

This light is best seen by boat.

The light is owned by the Coast Guard. Tower closed.