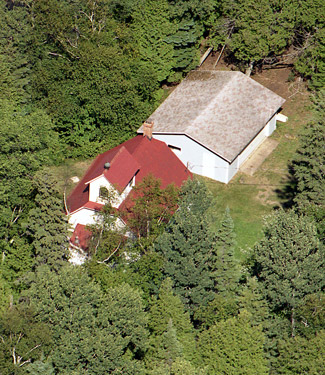 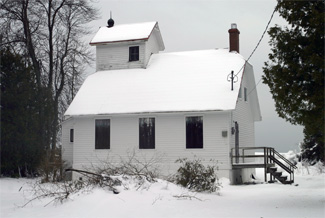 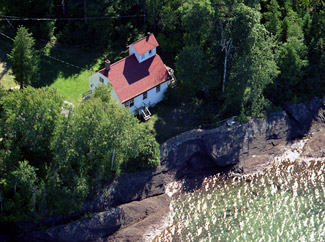 A lighthouse was established on the western side of Eagle Harbor in 1851, but as a rocky reef, with just eight-and-a-half feet of water over it, extended across the harbors entrance, only vessels of a certain draft could call there. In 1863, a committee, appointed by the Lighthouse Board, visited the Great Lakes and suggested the establishment of new lights to aid the increase in shipping triggered by mining operations on the Keweenaw Peninsula. Among the proposed additional lights were ranges lights for Copper Harbor and Eagle Harbor:

There exists a similar necessity for range-lights in Eagle harbor as in Copper harbor, similar in kind, but not in degree.

There is less water over the bar at Eagle harbor, where the depth is below ten feet, and the bottom is rocky. But here, as at Copper harbor, a day range was necessarily established by private individuals, and if two very small lights were put up, of the character of bug lights, small vessels would profit by them. The land belongs to the Eagle Harbor Company, which will gladly transfer the small quantity necessary for this purpose, on account of the advantage which the company would expect to derive from its use in this way.

A project for improving the harbor so it could serve as a harbor of refuge was adopted in 1866, and over the next several years, a 130-foot-wide entrance channel with a depth of fourteen feet was blasted through the reef. To help mark the channel, a wooden, rock-filled crib was placed on each side of the entrance. The improvements were completed in 1879 at a cost of $95,896.

On March 3, 1875, Congress appropriated $8,000 for range lights to mark the entrance channel being constructed at Eagle Harbor. Roughly three acres of land were acquired on the southern side of the harbor in 1875, and the range lights were built during the 1877 season. The rear light, which had a focal plane of twenty-nine feet above the harbor and was situated 1,000 feet south of the front light, was exhibited from a rectangular tower mounted atop the lake-facing gable of a six-room, one-and-a-half-story keepers dwelling. Located near the shore, the front light was exhibited from a window atop a twenty-four-foot-tall wooden tower that was square in it slower half and octagonal in its upper half. A smaller window was situated on the landward side of the front tower so the keeper could see if the light was burning from the comfort of the dwelling. The structures built for Eagle Harbor Range Lights resembled those employed on the Great Lakes at Copper Harbor, Grand Island Harbor, Portage River, Baileys Harbor, and Presque Isle.

A 1,000-foot-long boardwalk linked the range lights, and access to the station was provided either by the old military road that ran between the lights or by a wooden-pile landing that extended out into the harbor near the front light. In addition to the tower and dwelling, the station was also equipped with a privy, barn, hen house, and a well house built over a nearby creek that facilitated pumping water to the dwelling. As the station was surrounded by swampy land, its healthfulness was listed as just fair.

After the range lights were placed in operation on September 20, 1877, mariners could use Eagle Harbor Lighthouse to locate the harbor and then align the range lights one above the other to pass through the reef at its entrance.

George Howard served as the first keeper of the lights from 1877 until 1879, when Henry Pierce, who had been head keeper at Manitou Island for four years, replaced him. Keeper Pierce spent a decade at the range lights and then moved across the harbor to take charge of Eagle Harbor Lighthouse in 1889, when its keeper died of pneumonia. After having worked his way up from third assistant to first assistant during four years at Stannard Rock, Thomas Thomson was put in charge of Eagle Harbor Range Lights in 1889. Four years later, Keeper Thomson replaced Keeper Pierce at Eagle Harbor Lighthouse.

Mary Wheatleay became the first female keeper of the range lights in 1898 and spent the next seven years looking after them before resigning in 1905. Charlotte E. Thomson then took charge of the lights until her son Thomas G. Thompson, could be transferred to Eagle Harbor Range from Gull Rock Lighthouse. Charlotte was the wife of Thomas Thomson who kept the range lights from 1889 to 1893 and then served at Eagle Harbor Lighthouse for a decade until his death in 1903.

Thomas G. Thomson kept the range lights from 1905 to 1908, during which time he married Ella May Will from Hamilton, Ontario. Keeper Thomsons next assignment was to Sand Point Lighthouse at the base of the Keweenaw Peninsula near Baraga, but after three years there, he moved to California, where he continued his career as a lighthouse keeper. Transfers within a lighthouse district were common, but it was rare for a keeper to move between districts as Thomas did.

Eagle Harbor Range was discontinued on June 30, 1912, and Norman W. Smith, its last keeper, was transferred to Portage River. An auction for the ranges abandoned dwelling was held in 1930 with the stipulation that the structure had to be relocated to private property. Gertrude Rowe, a resident of Detroit who was born on the Keweenaw Peninsula and had property at Eagle Harbor, placed the winning bid of $400. During the winter of 1932  33, Gertrude hired the County Road Commission to move the lighthouse as the swampy ground around the lighthouse would be frozen. A large caterpillar tractor was hooked up to the sled on which the lighthouse had been placed, but shortly thereafter, the heavy tractor became mired and had to be extracted by a second county tractor. Besides losing its attached kitchen, the lighthouse arrived at its new home near the harbor in good shape, and after being remodeled, has served ever since as a summer cottage for the Rowe family.

Eagle Harbor Range Lights were reestablished in 1939, with a white, octagonal tower displaying the front light and the rear tower being shown from a post. The octagonal tower was likely the ranges original front tower, but it was replaced in 1962 by a pole light, and what happened to it after that is unknown. The only historic structure remaining along the range line is the brick oil house located alongside Highway 26.

For a larger map of Eagle Harbor Range Lighthouse, click the lighthouse in the above map.

From the town of Eagle Harbor, travel east on Highway 26. Just before the road runs alongside the water, you will see this former range light, now used as a residence, on your left.