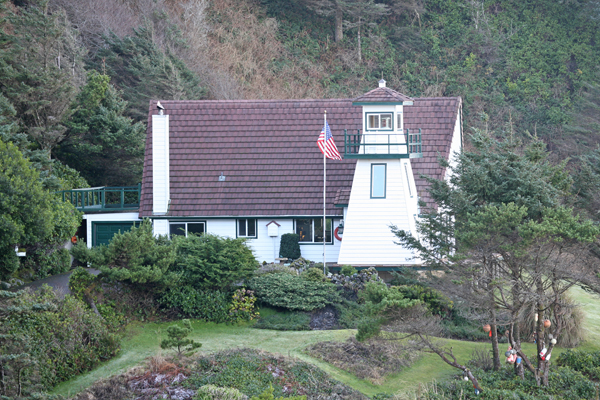 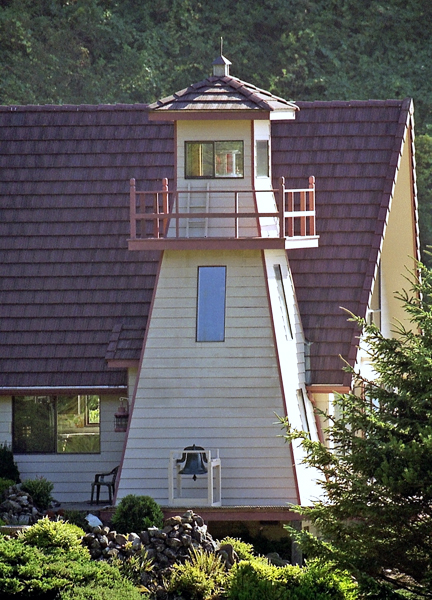 Captain James Cook, on his third and final voyage of discovery, steered the HMS Resolution northward from Hawaii in search of a Northwest Passage. On March 6, 1778, he sighted land, the Oregon Coast. He recorded in his journal, "The land appeared to be of moderate height, diversified with hill and Valley and almost everywhere covered with wood." The passage would elude him, and much of the charting of the Pacific Northwest would later be done by a sailor who served on the Resolution named George Vancouver, but Cook left his mark on the diversified coast by naming a prominent cape rising sharply out of the Pacific Ocean. He called it Cape Perpetua, having first sighted it on March 7, St. Perpetua Day.

Today, Cape Perpetua is a scenic wonder, drawing visitors to its spouting horn, devils churn, and dramatic view of the Oregon Coast. Nestled on the north spur, under the shadow of the cape, is a privately owned lighthouse, marking the spot for vessels sailing the coast between Coos Bay and Yaquina Bay.

Built in 1976 by former lighthouse keeper and noted maritime historian Jim Gibbs, Cleft of the Rock Lighthouse takes its name from the hymn by Fanny J. Crosby, He Hideth My Soul in the Cleft of the Rock, which is based on Exodus 33:22.

Mr. Gibbs designed the lighthouse as a replica of the former Fiddle Reef Lighthouse, which was located on Oak Bay near Victoria, British Columbia. Made of redwood siding originally painted driftwood grey, the tower stands thirty-four feet tall, has a focal plane of 110 feet above the sea, and serves as the entrance to the dwelling. Its optic, formerly used by the Canadian Coast Guard at sea-girt Solander Island off the west coast of Vancouver Island, sends out a beam from a small halogen globe that can be seen sixteen miles out to sea. The light has a signature of alternate white and red flashes every ten seconds.

The home and lighthouse have been a labor of love for Mr. Gibbs, who has incorporated several historic pieces from West Coast lighthouses into the décor. The stair railing from the original keepers dwelling at Yaquina Head is installed in the tower, and among many maritime treasures are two fourth-order Fresnel lenses - one from Semiahmoo Lighthouse and the other from Patos Island Lighthouse.

Mr. Gibbs, whose life has been devoted to all things maritime, began his career in the Coast Guard. He once recounted that he initially requested to be stationed on Scotch Cap Lighthouse on Unimak Island in Alaska. Instead, I was sent to Tillamook Rock Lighthouse. I wasnt too thrilled, but it turned out to be a good thing. On April 1, 1946, Scotch Cap was hit by a large tsunami, knocking it completely off its foundation and killing the five men stationed there.

Since his Coast Guard days, he has authored twenty-one maritime books including Lighthouse of the Pacific (1986) and is considered an authority on Pacific Coast Lighthouses and Northwest shipwrecks.

His light at Cape Perpetua was not originally considered for a lighthouse designation because ocean traffic at this point travels well offshore, but in 1979, just over 200 years from Captain Cooks day of discovery, the light was made an official navigational aid. James Gibbs remained actively involved in the Oregon Lighthouse community until passing away at his beloved lighthouse in May 2010.

For a larger map of Cleft of the Rock (Cape Perpetua) Lighthouse, click the lighthouse in the above map.

On Highway 101, travel to the turnout near milepost 166, 1.8 miles south of Yachats. As the Cleft of the Rock Lighthouse is privately owned, pictures should be taken from the shoulder of Highway 101 - be careful.


The drive that leads to the lighthouse is clearly labeled Private, so all photographs must come from Highway 101. The stretch of highway near the lighthouse contains several curves that limit visibility, so be careful when crossing the road.