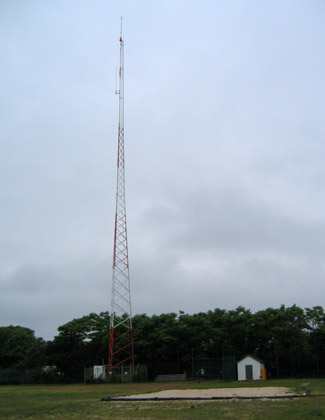 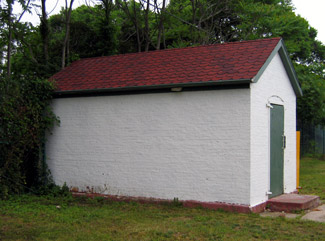 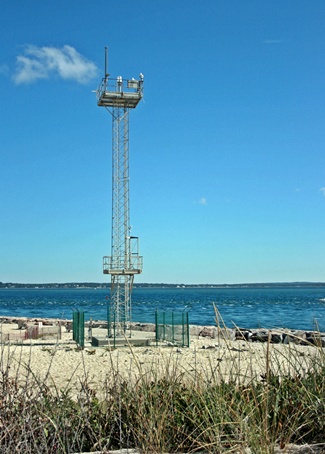 Shinnecock Bay Lighthouse was first activated on January 1, 1858, showing a fixed white light produced by a first-order Sautter Fresnel lens. Coincident with this lighting, Montauk Point Lighthouse, located some thirty miles to the east, received a new Fresnel lens that changed its characteristic from fixed white to fixed white varied by flashes. On February 19, 1858, the captain of the John Milton, which was nearing the end of a fifteen-month-long journey to San Francisco and back, spotted Shinnecock Bay Light. Unaware of the activation of Long Islands newest light, the captain believed he was looking at Montauk Point Light, and after a short time steered his vessel north to enter Block Island Sound. Much to the captains surprise, his vessel soon ran aground, and all thirty-one members of his crew perished that dark, stormy night. The same day, another captain was similarly confused by the light, but figured out that something was amiss and held his ship offshore until daylight. Although Shinnecock Lighthouse initially confused mariners, it helped fill the sixty-seven-mile dark void that had previously existed between the lighthouses at Fire Island and Montauk Point. Shortly after its formation, the Lighthouse Board sent a letter to captains of vessels traveling between the United States and Europe seeking their input on the quality of U.S. lights versus those of other countries and to learn where new lights might be needed. In response to this query, C.R. Mumford, commander of the packet-ship Wisconsin, wrote the following in September 1851: Within the last few years a great number of vessels have been stranded between Montauk Point light and Fire island light, on Long Island ; and in many instances there has been a great loss of life, as many of them were vessels loaded with emigrants; and I would most respectfully suggest that a powerful flashing light be placed on some elevated position about halfway between Montauk and Fire island lights. This last light is but a very indifferent one, and at a distance of ten miles, shows about as large as a star of the fourth or fifth magnitude.

At the behest of the Lighthouse Board, Congress provided $35,000 on August 3, 1854 for erecting a lighthouse at Great West Bay, known now as Shinnecock Bay, and followed this up with a $12,000 appropriation on August 18, 1856 to complete the work.

In 1855, ten-and-a-quarter acres of land near Great West Bay were purchased from John H. Foster and Edward H. Foster for $1,200. The deed signed by John H. Foster gave him the exclusive right to gather and make use of Sea weed drifting on the Beach, East side of the property. The barrier beach to the south had been considered as a site for the station, but the sand was deemed too unstable to support a lighthouse tower so instead a site on Ponquogue Point, about one mile north of the beach, was chosen.

Work on the new station was overseen by Lieutenants J.C. Duane and James St. Clair Morton of the Crops of Engineers. A large, ten-foot-deep hole was dug, and layers of pine logs were laid perpendicular to each other, forming a sort of grillwork. The hole was then filled with concrete to near ground level, and large granite blocks were put in place as a base for the approximately 800,000 bricks it took to build the tower. A central iron column supported a circular set of stairs that provided access to the lantern room, which housed the first-order Fresnel lens.

Two two-and-a-half-story keepers dwellings were built on opposite sides of the lighthouse and were connected to the tower by a covered walkway. The western residence was used by the head keeper, while the two assistant keepers each occupied a floor in the other building. The first head keeper of Shinnecock Lighthouse was Charles A. Conley, who received a salary of $500 a year.

In its 1867 report, the Lighthouse Board noted: The stone deck of the tower leaks and the parapet wall is cracked horizontally in a line with the air-registers, caused, it is thought, by oscillation of the tower. It is proposed to cover the deck with an iron plate and encase the parapet with cast-iron plates, which will be fastened to the parapet and lantern-deck. The lantern deck was repointed during the summer of 1867 and a cement wash was applied which stopped the leakage and eliminated the need for more extensive measures.

The red brick tower was one of the tallest lighthouses on the East Coast at 168 feet, and keepers were required to be in decent physical shape, as each trip to the lantern room involved walking up 178 steps. During the stormy evening of September 30, 1883, an amazing 160 birds perished after slamming into the glass panes of the lantern room. Eighty-five of the birds were taken to a local ornithologist who identified them as being 59 Black-Poll Warblers, two Summer Tanagers, two Gray-Cheeked Thrushes, one Veery, one Ovenbird, one Olive-Backed Thrush, one Parula Warbler, and one Yellowthroat.

The official name of the lighthouse was changed from Great West Bay Lighthouse to Shinnecock Bay Lighthouse in 1893. In 1901, the Lighthouse Board requested funds to alter the lights characteristic from a fixed light to a flashing one, arguing that many transatlantic steamers steered toward the light, which could easily be confused for a ships light and thereby lead to a possible disaster. The request was not funded for several years, but the light was changed in 1907 from oil to incandescent oil vapor, which more than tripled the lights candlepower while using a fraction of the amount of fuel. Finally, in 1915 a lens with bulls-eye panels and solid brass panels was installed in the lighthouse, changing the light characteristic to a group of three white flashes every seven-and-a-half seconds.

In July 1893, lightning struck Shinnecock Lighthouse and damaged a portion of the keepers dwellings. Assistant keeper John Raynor, who would soon be promoted to head keeper, received a severe shock from the strike.

Given the stations ample acreage, the keepers often kept cows or pigs and grew large vegetable gardens. When Major Charles Potter arrived for an inspection in November 1909, he asked Keeper John Raynor what the oil house was used for. Before the keeper could answer, a high-pitched female voiced answered loudly, John uses that for a work shop and hes going to use it as long as hes here. John, you come here. Potter looked and saw First Assistant John Potter (no relation, apparently) jump up from what he was occupied with and answer his wifes call. She continued in a loud voice: Hes got every devilish thing at this station except that old oil house and now hes trying to get that. There aint a devilish thing left for John. Hes got everything filled with his hogs, his cows and his horse!

The unsettled Major Potter walked away in disgust from the confrontation, noting later, the voice followed me growing louder and louder as the distance increased but I purposely avoided hearing anymore  I could not have felt more uncanny if I had been in an insane asylum. Assistant keeper Potter later apologized in writing, saying, Women get sore sometimes and talk a good deal more than they might. Major Potter first considered firing the assistant, but decided he was rather loath to recommend drastic action in this case for such an old and faithful employee of the Board.

In 1931, an electric light, which produced a group of two red flashes every fifteen seconds, was installed atop a red skeleton tower on the beach near Shinnecock Inlet, and Shinnecock Lighthouse was discontinued. George J. Thomas, the last head keeper of the lighthouse was transferred to Sea Girt Lighthouse in New Jersey. In 1925, the two young daughters of Keeper Thomas sent two dollars to Bishop Manning for construction of the Cathedral of St. John the Divine along with the following letter:

We live at a lighthouse. My father is one of the keepers. We hope the cathedral will be a great light to all people who visit it, as our light here is to the ships at sea.

With best wishes for success.
Lucy and Alice Thomas

The Great Hurricane of 1938 destroyed the metal tower, but the old brick lighthouse stood resolute. A similar skeletal tower was erected in 1939, and a light atop a metal tower continues to mark this area of the coast today. The federal government offered to lease the abandoned lighthouse to the Town of Southampton in 1934, but the Town Board rejected the proposal.

Shortly after assuming control of the nations lighthouses in 1939, the Coast Guard felt Shinnecock Lighthouse was unstable and should be torn town. Local residents wanted the tower preserved and had the lighthouse examined by engineers, who found it to be safe and stable, but the Coast Guard still pursued its demolition plans, and in December 1948 the bottom portion of the brick walls on one side of the tower was chiseled away and replaced with supporting timbers. The timbers were then doused with gasoline and set on fire by eighty-eight-year-old Ellsworth Howland. As the wood was consumed, the tower slowly leaned over and then crashed to the ground.

A local newspaper carried the following on the destruction of the lighthouse on December 23, 1948. There were tears in the eyes of many old timers who stood watching the old landmark pass away, powerless to save the old building. We did our best to save it, but in vain. Thus passes a landmark that will be missed by thousands ashore and by those who still used the old Ponquogue Lighthouse as a guide to bring them safely to land from the sea.

For many years, the only evidence of the majestic Shinnecock Lighthouse was a brick oil house that was left standing, but on July 7, 2012, a historical marker was unveiled near where the lighthouse formerly stood that reads: Shinnecock Lighthouse stood here from 1858 until 1948. The 168-foot red brick tower was among the tallest on the East Coast. Its light was visible 18 miles at sea. Town of Southampton, 2012.

Richard Casabianca, whose great-grandfather Waldo Penny served as a keeper of the lighthouse for over a decade, was instrumental in getting the marker erected. When asked what the marker would mean, Mr. Casabianca replied: I suppose what I hope to accomplish is to remind people that sites and structures give us our communal culture and story  and that their loss, usually through stupidityper Grannyis final, hurtful and wasteful. Imagine how our lives might be enriched if it were still standing.

A seventy-five-foot-tall skeletal tower, known as Shinnecock Light, stands guard over Shinnecock Inlet and marks this stretch of coast.

For a larger map of Shinnecock Lighthouse, click the lighthouse in the above map.

From Highway 27 exit at Hampton Bays. Turn left on Highway 27A, and then turn right on Ponquogue Road. Go south on Ponquogue for 1.5 miles, then make a left onto Shinnecock Avenue. After 0.5 miles turn right on Foster and continue toward the bridge. The Coast Guard Station and site of the former tower will be on your left.