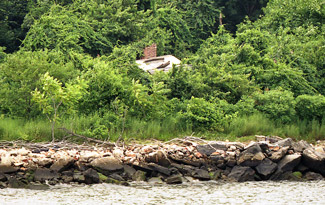 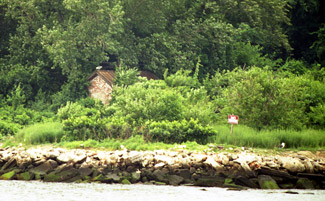 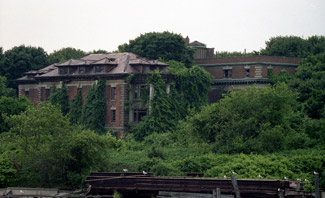 Four decades of negotiations transpired before a lighthouse was finally built on North Brother Island. The process started in 1829, when Congress approved $5,000 for building a lighthouse on or near one of the islands called Brothers at the narrows, in Long Island Sound. The dangerous northern approach to Hell Gate, located in the East River between Astoria, Queens and Wards Island, had been the scene of untold shipwrecks, and the New York Superintendent of Lights made it a top priority to have a light established there.

North Brother Island was considered by many to be the ideal site for the new light, but the lands owner, one Edward Ackerson, refused to sell. After three years of attempts to purchase the land, Auditor Stephen Pleasonton formally asked the New York legislature to condemn the property. Two years later, the state had not acted, and the Congressional funds were automatically returned to the treasury.

The sum of $10,000 was appropriated in 1848 for a lighthouse on North Brother Island if a title to the site could be obtained upon satisfactory grounds,  and a Navy commander named Pearson was sent to North Brother to inspect the site and negotiate the purchase of the property. It was found that Mr. Ackerson, the owner, was indisposed to sell less than the whole island of fifteen acres, for which he asked $9,000, but would take $5,000 for two acres. This price, in mid-nineteenth century dollars, was considered extremely high, and the earmarked funds were transferred to maintain other lighthouses. Title to the necessary land on the southern tip of the island was finally acquired in 1868 at a price determined by commissioners of appraisal appointed by the State of New York.

Following the appropriation of $8,500 in 1866 and $7,500 in 1867, a design for the lighthouse was developed that called for a two-story dwelling with a mansard roof and integral tower. Similar structures were built around the same time at several sites, including Colchester Reef, Vermont, Pomham Rocks and Rose Island in Rhode Island, and Barbers Point, Bluff Point, Esopus Meadows, Stepping Stones, and Hudson-Athens in New York. The keepers dwelling had a kitchen, pantry, dining room, sitting room, and oil room on the main floor, and four bedrooms in the upstairs floor. The tower was octagonal and rose out of the front of the house to a height of fifty feet above the river.

The original beacon was a sixth-order lens showing a fixed white light that was activated for the first time in November 1869. A fog bell was established at the station on April 15, 1889, and on May 15, 1894, the character of the light was changed from fixed white to five seconds of light separated by a five-second eclipse, through the installation of a new lens with an occulting clock. On November 29, 1899, the intensity of the light was increased by replacing the fifth-order lens with a fourth-order lens. A separate brick oil house was built in 1901.

In 1883, a fence was built behind the station to separate the lighthouse from its neighbor, Riverside Hospital. The medical center was operated by the City of New York and housed patients suffering from infectious diseases. The hospitals most famous patient was Mary Mallon, better known as Typhoid Mary, who lived there for over twenty years. Typhoid Mary was the first healthy carrier of typhoid in the United States, and through her work as a cook over fifty people were infected, three of whom died. Mary had been released after an initial stay of three years, but when she was discovered working again as a cook under a pseudonym at a Manhattan hospital that was suffering a typhoid outbreak, she was sent back to North Brother Island where she would remain the rest of her life.

In 1902, Joseph D. Meade was appointed keeper at North Brother Lighthouse. Meade came from a post at Whale Rock Lighthouse in Rhode Island, where he had valiantly tried to rescue his assistant keeper whose boat had capsized. Although Meades attempt was unsuccessful, he did receive a letter of commendation from the Lighthouse Board for his efforts. On January 5, 1903, Meade left North Brother Island to visit his mother in New York City, leaving his two brothers who were living at the lighthouse at the time to look after things. When Meade had not yet arrived at his mothers on January 7, police were called and soon located Meades boat tied up at a city dock. The authorities concluded that foul play was most likely involved, but Meades body was never found.

John F.P. Jacobi, who succeeded Keeper Meade, witnessed the worst maritime disaster to ever hit New York. On June 15, 1904, the General Slocum, a sidewheel steamer, left the East Third Street dock in New York taking roughly 1,400 members of St. Marks Evangelical Luther Church to a church picnic on Eatons Neck, located on the north shore of Long Island. Around ten in the morning, as the ship passed Hell Gate, smoke began pouring from the bow on the port side.

The fire spread very quickly, forcing the passengers to crowd together at the vessels stern to avoid the smoke and flames. Rather than heading for the beach only 300 feet away, Capt. Van Schaick proceeded at full power to North Brother Island, likely to avoid flammable businesses along the river. Most of the fire hoses on the ship did not work, and many of the life preservers turned out to be rotten. One passenger tried to lower a lifeboat, only to discover it to be wired in place.

Passengers began to jump overboard as the ship neared the southern end of North Brother Island, but instead of beaching the boat there, the captain went all the way to the other side of the island and ran the vessel aground in a small cove. Even though the flaming bow was now aground, the stern with most of the survivors was still in deep water. The impact of the ship running aground caused the top deck to come crashing onto the lower decks. Some passengers were thrown into the water, while others fell into the flames. Alerted by local residents who had seen the ship on fire, doctors and nurses from the islands hospital, as well as other residents, rushed to the scene and tried to rescue as many as they could. A tug saved over 150 persons, and a doctor pulled six people into his small boat. Hundreds were saved, but over 1,000 passengers died that day, nearing the number that would perish on the much more famous sinking of the Titanic.

A few days after the accident, the charred hull was raised to look for remains of other victims, and the next year, what was left of the ship was converted into a coal barge used on the Delaware River.

Kathleen Murray was living on North Brother Island with her parents Keeper William J. Murray and Lillian Murray in 1935, after she gave up her job as a beautician in Brooklyn because it required her to ride a subway, a street car, and a ferry to get to and from work. This proved to be fortuitous for John Zell, as it was Kathleen who heard his shouts for help on a cold December morning. I heard strange cries, but at first I paid no attention, because I thought it was cats, said Kathleen. All kinds of peculiar cats live around here on the island, and they make funny noises. But this sound seemed to come from South Brother Island, and cats dont swim unless they have to, so why should cats be over there?

Kathleen looked over to South Brother Island, spotted what she thought was a body, and immediately notified her father, who rowed over and found John Zell, suffering from exposure. Zell was serving time at Rikers Island Penitentiary for petty larceny, and had plunged down a coal chute and into the river earlier that morning in an attempt to get out of more potato peeling. Zell was taken to a hospital to recover, but was most likely soon back on Rikers Island.

In 1953, a light was mounted atop the stations metal fog bell tower, and the lantern room and top portion of the tower were removed from the lighthouse. After over a half-century sitting abandoned and neglected, the lighthouse has collapsed, and now barely a glimpse of its roof can be seen above the foliage that has grown up on the island.

One item from North Brother Island Lighthouse has been preserved. The fog bell formerly used at the station is displayed at the New York City Police Departments Harbor Unit at College Point, where it serves as a memorial to officers who died in the line of duty.

For a larger map of North Brother Island Lighthouse, click the lighthouse in the above map.

The best views of the lighthouse come from the East River.

The property is owned by the City of New York. Grounds closed.