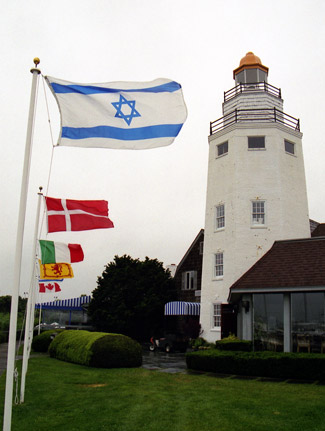 Lake Montauk was the largest body of freshwater on Long Island until developer Carl Fisher connected the lake to Block Island Sound in 1927 as part of his effort to turn Montauk into the Miami Beach of the North. Near Lake Montauk, now an ebayment, Fisher built Montauk Manor, Montauk Tennis Auditorium, and Montauk Downs Golf Course. On Star Island, an island near the entrance to Lake Montauk that is now connected to the mainland by a causeway, Fisher constructed Montauk Yacht Club and Star Island Casino.

Fisher made his fortunes in the automobile business by starting a company that supplied acetylene headlights to nearly every car manufactured in the United States. After selling the company, Fisher conceived and helped develop Lincoln Highway, which connected New York City to San Francisco and was the countrys first transcontinental road. Next, Fisher created Dixie Highway, a north-south road linking Michigan to Florida.

During a vacation to Florida in 1910, Fisher saw the potential of the swampy, bug-infested land between Miami and the Atlantic Ocean and began buying up parcels. Fishers promotional talents led to the population of Miami Beach more than quadrupling in the early 1920s.

With his fortune made from Miami Beach, Fisher turned his attention to Montauk to provide a warm season counterpart to his Florida development. Montauk Yacht Club was built in 1928 and included Astors, Whitneys, and Vanderbilts among its original members. Charles Lindbergh was a guest at the club, arriving on Lake Montauk with his seaplane. As part of the club on Star Island, Fisher built a replica of the historic Montauk Lighthouse in the form of sixty-foot-tall, octagonal, brick tower. The tower has two galleries, one surrounding its shingled watch room, and the other encircling its lantern room.

A real estate land bust in Florida followed by a devastating hurricane in September 1926 wiped out much of Fishers income from Miami Beach, and after the stock market crash of 1929 and the Great Depression, Fishers Montauk project went into receivership in 1932. Fisher died in a Miami Beach hospital in 1939 at the age of sixty-five after a lengthy illness compounded by alcoholism.

The privately maintained lighthouse at Montauk Yacht Club appeared on the Coast Guards Light List for many years, but its light was deactivated in 2011.

For a larger map of Montauk Yacht Club Lighthouse, click the lighthouse in the above map.

From Highway 27, almost 1.5 miles east of Montauk (but before you reach Montauk Lighthouse), turn north on West Lake Drive. After 1.7 miles, turn right to reach Star Island, where you will find Montauk Yacht Club.

The lighthouse is owned by Montauk Yacht Club. Grounds/tower open.