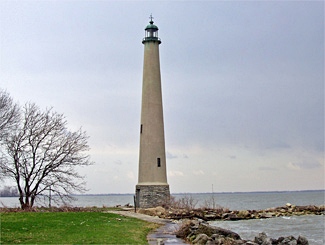 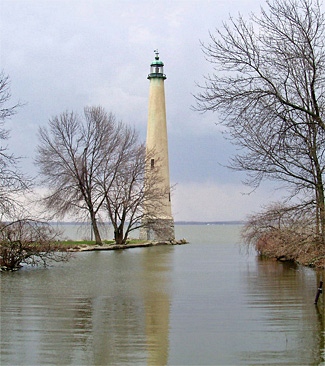 Standing on the north side of Grand Lake St. Marys is a quaint lighthouse with two names. Bill Jasperson built Northwood Lighthouse, also known as Eddystone, in 1923 as a drawing card for his Northwood Subdivision. The light, reportedly equipped with a Fresnel lens taken from a lighthouse off Cuba, originally operated under a government license and functioned as a seasonal aid to navigation from April through November. Though the light is no longer active, it is impressive that it ever was, considering Grand Lake St. Marys is a man-made reservoir.

More important than its brief career as a navigational aid is Northwood Lighthouses role as a monument to one of its early ancestors. The fifty-foot conical tower stands as a two-thirds scale replica of and a tribute to the famous Eddystone Lighthouse in the English Channel. While Northwoods history as a beacon on a feeder reservoir may not be deemed exciting or memorable, that of its namesake certainly is, and knowing a little bit about it will make a visit to Northwood much more meaningful.

The completion of Eddystone Lighthouse in 1698 was a historic moment in navigational history. Built on Eddystone Rocks, a dangerous reef eight miles from Rame Head, Cornwall, it was the first lighthouse to be built on an exposed rock in the open ocean. After only a year, the sea and weather had taken quite a toll, and the tower was in need of major renovations. Henry Winstanley, Eddystones builder, oversaw its extensive repairs. His second tower stood until 1703, when a violent storm destroyed it and claimed Winstanleys life. Five years later, the third Eddystone Lighthouse was completed. Built by John Rudyard, this tower lasted until 1755, when its own candles set the roof on fire and destroyed the structure. By 1759 a new Eddystone had been completed. John Smeaton built the fourth tower out of granite blocks, using a dovetail design, and it lasted 127 years. By the early 1880s the base had cracked, and it was determined that a new tower was needed. The old tower was taken apart and moved to Plymouth Hoe, where it still stands as a monument to Smeaton. The Eddystone Lighthouse that stands on Eddystone Rocks today is the fifth tower to stand on the reef and was built by James Douglass in 1882. It is still active and has been automated and unmanned since 1982. The tower stands 161 feet high and has a focal plane of 135 feet.

With such an eventful past, it is no wonder that Eddystone inspired the construction of Northwood Lighthouse.

Frank Sommers purchased the Northwood development, including the lighthouse, in the 1930s, and then decided to sell the lighthouse in 1972. The asking price at that time was $50,000, which included an easement through adjoining land for accessing the lighthouse and the lease rights to the state-owned land on which the lighthouse stood. The lighthouse was placed on the National Register of Historic Places in 1982.

Though its own light does not burn anymore, Northwood Lighthouse still shines as a tribute to one of the greatest lighthouses in the world.

For a larger map of Northwood Lighthouse, click the lighthouse in the above map.

The lighthouse is located on private property, so it is best viewed from the water, but you can get a decent view from Northwood Drive.