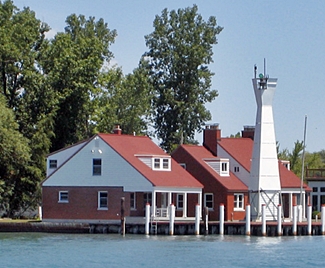 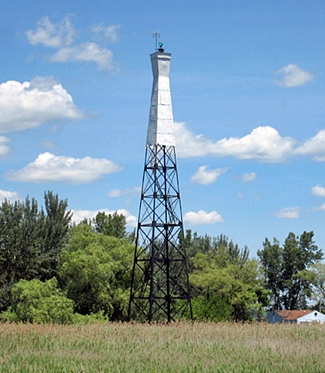 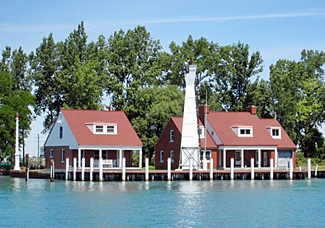 St. Clair Flats Range Lights went into operation on November 1, 1859 to guide ships through the South Channel at the confluence of St. Clair River and Lake St. Clair, but mariners soon called for a wider, deeper, and straighter channel for entering the river. Following the Civil War, work on a new canal across the flats commenced in 1866 and was finished five years later in 1871. Known as St. Clair Flats Canal, this channel had a width of 300 feet, a depth of thirteen feet, and was bounded on either side by a dike, 7,227 feet long. (The construction of the canal triggered a debate between the U.S. and Canada over whether the canal was partly in Canada.) Anticipating the new canal would need navigational lights, Congress allocated $60,000 on July 28, 1866 for two lighthouses to mark the ends of the western dike. Plans for the two lighthouses were approved by the Lighthouse Board in 1869, and the necessary foundation pilings were driven later that year. Work continued on the lighthouses until a law passed on July 12, 1870 required that all unexpended funds for an appropriation be returned to the Treasury at the end of the fiscal year. The unexpended balance of $33,000 thus reverted to the surplus fund and work on the project stopped until Congress restored the $33,000 on March 3, 1871.

When work was halted during the summer of 1870, the two lighthouses had reached the height of their first floor. Construction resumed in 1871, and the two lights, known as St. Clair Flats Canal Upper and Lower Lights, were officially placed in operation on November 15, 1871, though temporary lights had been shown since the canal officially opened on July 25, 1871.

The lighthouses were constructed using plans that were followed at several other places on the Great Lakes: McGulpin Point, Eagle Bluff, Chambers Island, Eagle Harbor, White River, Passage Island, and Sand Island. Built in what has been called a Norman Gothic style, these lighthouses consisted of a tower set diagonally into one corner of a one-and-a-half-story dwelling. Just above the dwellings roofline, the corners of the square tower are beveled off to create an octagonal tower.

A stone foundation, placed on timber piles, extended from six feet below the grade to six inches above it. The lighthouses themselves were built of red brick and featured green shutters and a slate roof. A fourth-order Fresnel lens, manufactured in Paris by L. Sautter & Co., was used in each lighthouses decagonal lantern room to produce a fixed red light at a focal plane of forty-five feet above the water.

In 1884, two iron rods were passed through the side wall of the lower lighthouse, immediately under the joists of the first floor, to stabilize the wall that had spread apart. New sheet piling was placed in the rear of both lighthouses in 1886, and the space between the new and prior work was then filled with cedar bark and earth. A circular iron oil house, with a capacity of 225 gallons, was erected at each lighthouse in 1890.

In 1902, Congress authorized the construction of a new channel, parallel to the existing one but separated from it by a 100-foot-wide dike on which the lighthouses were located. This work began in 1904, and after the new canal was finished on October 17, 1906, upbound traffic used the east channel and downbound channel the west channel.

On May 1, 1912, the Lower Light was changed from red to white, and the following month an unwatched intermittent white light was established atop a red cylindrical structure on the lower end of the canals east revetment.

Henry Corgan was appointed keeper of the Upper Light in 1919 and retired from there in 1924 after a career that spanned more than half a century. Corgan began his service at Manitou Island in Lake Superior and served at Gull Rock, Point Peninsula, and Copper Harbor before being transferred to St. Clair Flats Canal Upper Light Station. At the time of his retirement, seventy-year-old Henry Corgan was the oldest lighthouse keeper in Michigan.

Plans were prepared in 1934 for a set of range lights to serve St. Clair Flats Canal. The new site was located upriver on Harsens Island and was aligned with the dike on which the upper and lower lighthouses stood. By June 30, 1935, land for the new range lights had been acquired and the steel towers and necessary wood pilings had been delivered. By the end of 1936, a keepers dwelling, boathouse, and the two lights had been erected at the new station at a cost of $31,048. The foundations for the towers were concrete piers situated atop wooden piles.

The front light was displayed from a forty-foot tower, while the rear light was placed atop a 100-foot tower, located roughly 4,000 feet from the front tower. The illuminating apparatus for each light was a fourteen-inch locomotive headlight reflector that ran on 110-volt commercial electric current to produce a light of 120,000 candlepower. Each tower had a small stand-by generator for use in case of a power outage. The six-room keepers dwelling was located near the front light and also served as the control station for the radio-controlled Lake St. Clair Lightship (LV-75), located eight miles away.

With plans in place for range lights for the canal, the upper light was stripped and its wooden substructure was set ablaze on May 13, 1934. The lower light had reportedly been deactivated in 1929. After having lost its lights, the center dike was removed to create one wide channel to serve both upbound and downbound vessels.

An assistant keepers dwelling was added to the new St. Clair Flats Canal Range Light Station in 1938, and the following year, the Coast Guard took charge of the lights. The station was home, at least seasonally, to Coast Guard personnel into the early 1990s. In 2002, a sealed-bid auction was held for the property, and Jeff Shook, president of Michigan Lighthouse Conservancy, submitted the winning bid. Jeff has made great progress in rehabilitating the station, which is also home to a forty-four-foot motor lifeboat that he has painstakingly restored.

For a larger map of St. Clair Flats Canal Range Lighthouse, click the lighthouse in the above map.

This light is best seen from the water, but can also be seen from Harsens Island. To reach the island, take the ferry from Algonac. Then, follow Highway 154 south on Harsens Island to its end at Clays Landing. From there, continue further south on S. Channel Drive for roughly three miles, and you will see the St. Clair Flats Canal Range Lights on your left. If you continue south to the end of the road, you can see the South Channel Lights.

The Fresnel lens from St. Clair Flats Canal Lower Lighthouse is on display at Port Huron Museum at 1115 Sixth Street in Port Huron.