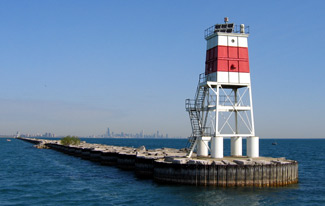 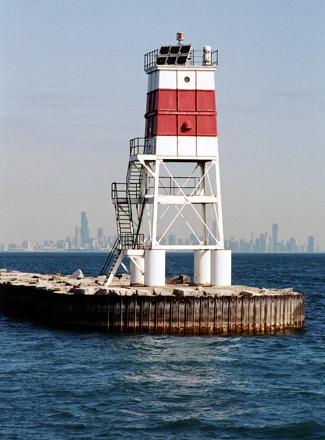 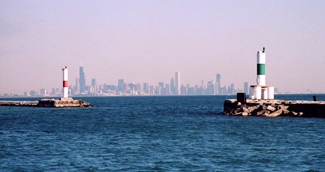 The plain, modern lights that mark Calumet Harbor today reveal little about Calumets earlier lighthouses and the colorful personalities that staffed them.

After surveying potential sites for new lighthouses on the Great Lakes in 1837, Lieutenant G.J. Pendergrast gave the following report on Calumet River:

Little Calumet river is twelve miles distant from Chicago. It possesses no very great advantages other than its being in the south bend of the lake, and affording sufficient water to allow of a harbor being formed at its mouth. Harbors at the head of this lake are of the utmost importance to the sailor who is so unfortunate as to encounter a gale from any quarter except from southeast to southwest. A lee shore is met with in all directions, and his only alternative is to beach his vessel; for as to beating off in a flat, shallow vessel, such as are usually met with here, it is out of the question. Hence it is that we hear of so many vessels being lost on the lakes, and the great anxiety felt to have places of shelter provided for them.

On March 3, 1849, Congress appropriated $4,000 for a lighthouse at the mouth of the Calumet River, and during 1851, a Mr. Irwin superintended the erection of the lighthouse using stone quarried at Blue Island and transported down the Little Calumet and Calumet River by barge.

On October 28, 1853, several ship owners and captains sent a letter to the Secretary of the Treasury that called for the discontinuance of the lighthouse. The light results in serious inconvenience, the men wrote, and greatly endangers both property and life, from the fact that there is no harbor, and the light is mistaken for that at Chicago. At the time, the mouth of the river was about a half-mile from the lighthouse and blocked by a bar, whereas the rivers mouth used to be close to the lighthouse. The superintendent of lights at Chicago urged that the bar be removed so the river could once again afford protection to shipping.

Calumet Lighthouse was extinguished on July 28, 1855, and the property was sold at auction for $125 to George W. Clark, who rented it to the Oehmich family for $50 a year.

With improvements planned for the harbor at Calumet, the government decided in 1870 that it would reactivate the light. This proved to be both difficult and expensive, and it wasnt until the spring of 1873 that a title to the old lighthouse had been obtained at a cost of $10,000. Repairs commenced in May 1873, and the lighthouse was reactivated on September 7, 1873, by Mary Ryan.

Mary Ryans final day on the job was November 6, 1880. Chester B. Rushmore, a new keeper with a new outlook on things, took over shortly thereafter.

A thirty-foot-tall, open frame tower was erected on the north pier in 1876 along with an elevated walkway that facilitated access to the light. The fourth-order Fresnel lens was transferred from the old lighthouse to the pier light on August 15, 1876, and the old lighthouse fell dark once again. As the harbor works were improved, the pierhead light was moved lakeward 350 feet in 1880, 630 feet in 1882, and another 300 feet in 1884.

After a new foundation, consisting of fifty-two yards of concrete with embedded rubblestone, was built in the pier, a cylindrical metal tower was erected in 1898 to replace the wooden pierhead tower. The following year, a twenty-by-forty-foot fog signal building was built just shoreward of the tower, and a ten-inch steam whistle commenced operation on July 1, 1899. Two assistants were assigned to the station in 1899 to help with the increased workload caused by the new fog signal. This mural shows both the 1853 lighthouse and pierhead light.

On June 28, 1902, Congress provided $7,500 for a new dwelling for the station, as the old lighthouse had been declared unfit for human habitation by the Lighthouse Board. A two-story triplex was built for the stations keepers in 1903.

In 1899, the construction of a breakwater to create an artificial harbor at the entrance to the Calumet River was authorized. Starting from a point roughly a half mile north of the rivers entrance, the breakwater, formed of timber cribs capped by concrete, projects east into the lake for about 4,000 feet before bending to the southeast. Work on a new metal combination lighthouse and fog signal building to mark the end of the 6,714-foot breakwater began in 1905. The stout, rectangular structure originally consisted of two full stories, topped by a pitched roof, with a cylindrical tower extending above one end of the roof. The new light and compressed-air fog signal commenced operation on July 20, 1906. Exactly a year later, a fog bell replaced the old pierhead steam whistle.

For several years, both the pierhead and outer breakwater lighthouses were active and maintained by keepers in season. A lifesaving station was located on the Calumet River, and one of the stations lookout towers was positioned near the pierhead lighthouse. When the surfman stationed at the lookout saw the flag at the outer breakwater lighthouse flying at half mast, he knew the keepers required assistance. Thanks to the lifesaving station logs, several instances of the keepers lowering their flag to signal the lookout tower were recorded, including the following one.

Early on the morning of April 16, 1921, the surfman on lookout noticed the distress signal was being flown at the outer breakwater lighthouse. A gale wind was blowing, the seas were very high, and the temperature was just above freezing. As the lifesaving stations lifeboat was out of commission, a rescue team was forced to request that the M.B. Mary tow their surfboat to the lighthouse. Accompanied by the two keepers of the pierhead lighthouse (James Muckiam and Carl Graan), the crew rowed the surfboat the final few yards up to the lee side of the breakwater lighthouse.

On March 28, 1922, $66,000 was provided for reconstructing the old, inadequate, and unsafe building on the breakwater and replacing its worn out fog signal machinery with a modern electric motor-driven air compressor air diaphone and electric light in lens. That year, the outer end of the breakwater was removed down to the water and rebuilt in concrete. The old steel lighthouse was raised and a deck slab and a basement with reinforced concrete walls were built beneath it. The new diaphone fog signal commenced operation on July 1, 1924, and the lighthouses old frame second story was later removed. In parallel with the work on the breakwater, the outer 400 feet of the north pier was removed, and the cast-iron pierhead tower was installed on top of the shortened pier and equipped with an electric type C diaphone, which went into operation on September 10, 1924. With the pierhead lighthouse now controlled remotely from the breakwater light, its two keepers were no longer needed.

The worst storm experienced by Keeper Jerome Robinson, who served at the breakwater lighthouse for twenty-one years, was in December 1928, when he was marooned in the lighthouse with three other men for four days in sub-zero weather as waves swept over the eighty-foot-tall tower. The force of the waves moved the lighthouses concrete basement six inches and shattered the three-quarter-inch plate glass portholes on the structures first floor. The storm left the lighthouse encased in nine feet of ice, and the light was obscured for many hours until the keepers managed to chip away the icy coating.

Due partly to the nearby steel mills that pumped plumes of black smoke into the air, the fog horn at Calumet was typically in operation 260 hours a month, usually more than any other fog signal on Lake Michigan. After Keeper Robinson transferred to Sheboygan Lighthouse in 1930, he was elated to find that the horn there averaged just over 90 hours a month.

The mouth of Calumet River and the surrounding land all lie within the State of Illinois, however due to the length of the breakwater, the breakwater lighthouse was located just east of the Illinois-Indiana State Line, which runs north-south. Since it is exposed to the full force of northern storms that can sweep the entire length of Lake Michigan, the lighthouse was damaged on several occasions. After two severe storms struck the station late in 1929, over 12,000 tons of rip rap were placed along the breakwater in 1930 to provide better protection for the station.

In 1934, a new dwelling was built on shore for the stations keepers, and plans were begun for two new lights for the detached, 5,020-foot breakwater that was under construction. A 600-foot gap, which provides a direct route to Calumet River from the lake, separates the old and new breakwaters. A light and fog signal tower, which had previously been in use at Holland Harbor, was transported to Calumet and placed at the southeast end of the detached breakwater. The new light and fog signal, which were remotely controlled from the breakwater lighthouse, were placed in commission on June 4, 1937.

Armand Seguin was stationed at the breakwater lighthouse in 1961-1962. During his service, the lighthouse was generally staffed by two coastguardsmen who spent four days at the lighthouse followed by two days off. Seguin remembers that there were two bedrooms, a kitchen, a bathroom, and an office/living room on the upper level, while the lower level housed the furnace, a water tank, and the air compressor for the fog signal.

The U.S. Steel South Chicago works provided electricity to the lighthouse for free via a submarine cable. The only catch was that it was AC at 25Hz. This meant that the lights flickered, and while a motor/generator was used to convert the electricity into a standard 110V and 60Hz signal for powering a television, the picture would periodically get off sync.

Inspectors from Chicago visited the station and found that the well water was contaminated. When Sequin inquired how bad it was, the inspector replied Well, you might take a bath in it, but dont get it anyplace by your face! And, boil it like mad before you cook with it. From then on, the coastguardsmen had to haul their own drinking water out to the lighthouse.

In 1995, the two-story, breakwater lighthouse was demolished over a period of twenty-two days. In its place, stands a white cylindrical tower marked with a red band, as seen in the bottom photo to the left. The nearby end of the detached breakwater is marked by a similar tower with a green band. The steel tower standing on four cylinders shown in the top two photographs is the one relocated from Holland Harbor that marks the other end of the detached breakwater.

For a larger map of Calumet Harbor Lighthouse, click the lighthouse in the above map.

This lighthouse can be seen distantly from Calumet Park but is best seen from the water. To reach the park, take Exit 62 from I-94 South of Chicago and go east for five miles on 95th Street (Highway 12/20) to the park.