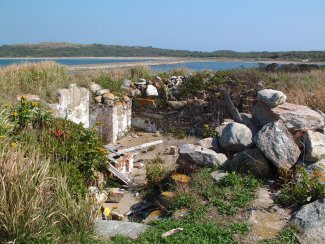 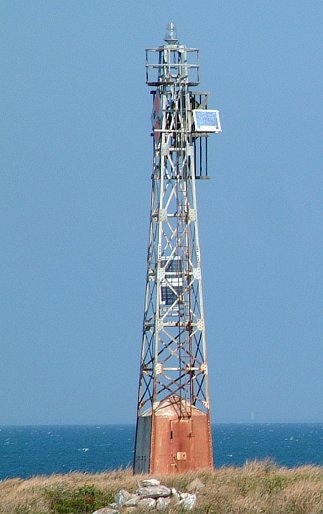 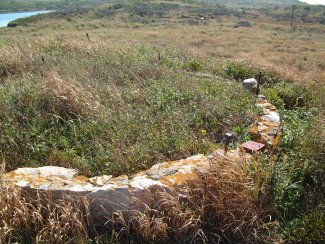 A string of islands, known as the Elizabeth Islands, extends from Woods Hole at the southwest tip of Cape Cod, dividing Vineyard Sound to the south from Buzzards Bay to the north. Cuttyhunk Island is the outermost island in this chain, and in 2000, it was home to fifty-two people. Bartholomew Gosnold landed on the island, known to the native Wampanoag tribe as Poocuohhunkkunnah, in 1602, after having named Cape Cod and Marthas Vineyard, and called it Elizabeths Island, after the reigning queen of England. While they had plans to colonize the island, Gosnold and his company harvested some of the islands sassafras, thought to be a cure for syphilis, and then returned to England. Though Gosnolds stay was just three weeks, he remains connected to the island. A seventy-foot stone tower was built on the island in 1902 to commemorate the tercentenary of Gosnolds landing, and today, those populating the Elizabeth Islands belong to the Town of Gosnold.

On May 7, 1822, Congress allocated $3,000 for a lighthouse to be built at Cuttyhunk Island, near New Bedford, Massachusetts, or on some place in the vicinity as soon as jurisdiction over the necessary land was ceded to the federal government. Using these funds, a conical stone tower and a detached, single-story, stone dwelling were built on the island, and the light atop the tower was placed in operation on May 2, 1823, with Benjamin Sayer as its first keeper.

Lieutenant Edward W. Carpender of the U.S. Navy inspected the light in 1838, when Nickerson Chase was its keeper, and issued the following report:

This light stands on Cutterhunk island, and is a guide both to Buzzards bay and Vineyard sound. It is forty-eight feet above the level of the sea, in a stone tower twenty-five feet high, and consists of the usual number of ten lamps, with thirteen-inch reflectors, arranged in two unequal series, (six in the first, and four in the second,) parallel, as has been repeatedly described, to each other and to the horizon. I found the lights in the middle of the forenoon prepared for use, but in a manner showing the necessity for a more rigid superintendence. The reflectors were cleaned in the too ordinary acceptation of the term. Instead of being burnished with whiting, as they require to be, every day, the smoke of the preceding night had merely been wiped off them. Not even so with the lantern, which, besides, was suffering seriously in the frame from corrosion. This is one of those lights that require to be of extraordinary magnitude, and to be well attended. I recommend no other alteration in it except a more compact arrangement of the lamps, and, in common with the rest of the district, a more suitable lantern.

This tower was originally of stone, but was so badly built as to require twice to be encased in brick. It has at length been rendered impervious to the weather, and now answers the necessary purpose. The dwelling is of stone, and is in sufficient order.

I.W.P. Lewis visited the lighthouse in 1842 and had additional complaints about the light along with another spelling for the island:

This light, which should be one among the best, and occupy the most prominent position on the island, as the key to enter Buzzards bay, is not only the poorest one among all in the vicinity, but is hidden away under a side hill, by which location it is of little or no use to navigation. A reef extends from the southwest end of Cuttahunk about two miles, and is one of the most dangerous in the sound, lying directly at and across the entrance to Buzzards bay. Vessels approaching from the eastward cannot see Cuttahunk light until they are close aboard of this reef, called the Sow and Pigs, over which the tide sets with fearful rapidity. If a light were erected on the extremity of this reef, it would be of immense value, not only to the coasting trade through Vineyard and Long Island sounds, but as the key to Buzzards bay, by which all the dangers of the west shore might be avoided.

To improve the lighting in the area, a lightship was established on Sow and Pigs in 1847, and a fifth-order Fresnel lens replaced the lamps and reflectors atop Cuttyhunk Lighthouse in 1857.

In 1860, a second story was added to the keepers dwelling and atop this was placed a square tower and lantern room for the light. This change increased the focal plane of the light by ten feet, and allowed the old dilapidated tower to be taken down.

S. Austin Smith served as keeper of Cuttyhunk Lighthouse from 1864 to 1881. Keeper Smith made the following entry in the stations log for January 31, 1872: Struck on the NW point at 7 oclock PM the schooner Connecticut. Smiths entries were almost always terse, and in this case failed to capture his role in the rescue of those aboard the grounded schooner. According to a newspaper account of the time, which was nearly as terse, Keeper Smith and John Black risked their own lives in a small boat and were exposed for twelve hours to the storm and sea in order to save the entire crew of the Connecticut.

The old 1823 dwelling was demolished in 1891, and atop its foundation was constructed a frame dwelling, twenty by nineteen feet in plan, with ells measuring ten by twelve feet. To display the light, a temporary conical wooden tower was built near the dwelling and linked to it by a covered way. Though considered temporary, the shingled tower would last for over half a century. A stone oil house was added to the station in 1903 to store the volatile kerosene used for the light.

Levi B. Clark began his career as a lighthouse keeper at Boston Light in 1902. After two years, he was promoted from second assistant to first assistant, but then in 1904, he was sent to Minots Ledge Lighthouse as a second assistant. Clark worked his way up to first assistant at Minots Ledge in 1909 and the next year was transferred back to Boston Light as head keeper. In 1911, Keeper Clark was sent to Cuttyhunk Lighthouse, where he would spend the next six years.

Keeper Clark and his wife Sophia had three children, the last of whom was born during their time on Cuttyhunk Island. Being a keeper at an offshore location for so many years was challenging. Special attention was needed to make sure the children received a proper education, and attending church services was nearly impossible. Levi Clark decided to solve the latter issue by securing a license as an Episcopalian lay reader from Bishop Lawrence. In August 1913, Keeper Clark preached to a crowd of nearly 200 summer vacationers on Cuttyhunk Island and vowed that he would continue to preach each Sunday as long as a single person attended.

Seamond Ponsart Roberts spent part of her childhood at Cuttyhunk Lighthouse, where her father, Octave Ponstart, served as its keeper from 1943 to 1946. Many years later, she penned the book Everyday Heroes, The True Story of a Lighthouse Family about her familys time at Cuttyhunk, Dumpling Rock Lighthouse, and West Chop Lighthouse. Cuttyhunk island was just a wonderful place for children, she wrote. It was magic for sure. And it still is, I am glad to report. But the best magic was that my Daddy was a lighthouse keeper. He was just the best man and most patient father anyone could ever have, and he had this neat occupation that provided me with a lighthouse tower to play in and help care for.

For over forty years, Edward R. Snow, a maritime author and historian, carried on the tradition of the Flying Santa, whose mission was to drop packages of gifts to lighthouse keepers and their families stationed at remote places along the New England coast. In December 1945, Snow dropped a Christmas package at Cuttyhunk Island for the Ponstarts, but little Seamond was crushed when her doll, though carefully wrapped, didnt survive the landing. Snow promised to make it up to her, and the following year, he flew to Marthas Vineyard and hand-delivered a new doll to her at West Chop Lighthouse where her father was then serving.

Cuttyhunk Lighthouse was damaged during the 1944 Great Atlantic Hurricane, which sunk the Vineyard Lightship stationed within sight of the island. The Coast Guard erected a metal skeletal tower on Cuttyhunk Island in 1947 and then demolished the wooden lighthouse and its companion dwelling. The light atop the skeletal tower was discontinued in 2005, and the tower was removed. The only remaining structure related to the lighthouse is a stone oil house.

For a larger map of Cuttyhunk Lighthouse, click the lighthouse in the above map.

Ferry service to the island is offered by Cuttyhunk Ferry Company, which operates out of New Bedford. Once on the island, a two-mile hike is required to reach the site where the lighthouse stood.